Because, at the end of the day, Pranksters, we ALL know someone artificially better than ourselves.

The question, though, is DO WE GIVE A FUCK?

(let’s hear it for a resounding NO)

(see also: why let The Man keep us down?)

I was recently introduced to a new concept in Feel Bad About Yourself on the Internet:

Klout is supposed to be a measure of your Twitter influence and blah-blah-blah, squirt, squirt. I stopped listening when I saw the shiny numbers.

Here, Pranksters, let me give you a tutorial about what Klout says about me.

There a big fat number next to my Twitter avatar and some other buttons, who-dillys and whatchamacallits right there! I’m just SURE this is going to be a GREAT representation of how I, Your Aunt Becky, behaves on The Internet. I am SURE I’m about to learn something!

So, what’s this about “topics?” Let’s see what topics I choose to impart my most important innermost thoughts and feelers about. After all, this is what I’m influential about! 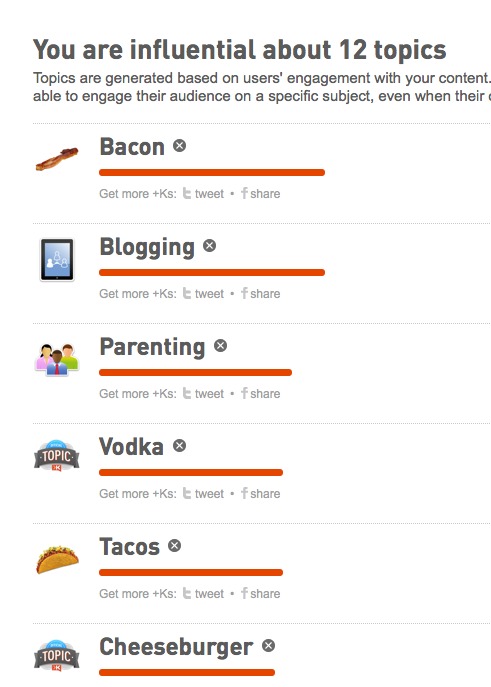 You had me, Klout, until you told me I was influential about “tacos.” Because while I do routinely say, “I’d like to kick Martha Stewart in the taco,” I don’t think we have an understanding as to precisely what type of taco I’m referring to. Perhaps you’ll do better next time, Klout.

P.S. Why can’t I be influential about encased meats? #justsayin

If there’s a single more useless vegetable in the planet than celery, I do know know what it is. Tacos, I can sorta understand, Klout, but CELERY? I hate celery with the fiery passions of a thousand burning suns, more vigorously than I hate John C. Mayer, and I’d be willing to bet that I’ve never, ever said anything about celery in my life.

In fact, Pranksters, this may be the longest I’ve spoken about celery in my life.

Lastly, let’s see my Klout style. Certainly this will give some insight into the crap I spew out in 140 characters or less…right? The celery thing has to be some sort of fucked-up glitch on Klout’s end. It simply must be.

So you’re saying I’m a pundit about celery, Klout? A CELERY PUNDIT? I MAKE THE MOTHERFUCKING NEWS ABOUT CELERY?