People would all cluck sympathetically when I told them that I had a two-year old and I was always kinda stuck scratching my head. Now, I’m always kind of scratching my head because I’m stupid and things like “In” and “Out” doors leave me stuck outside for hours, but this was especially bad. Because my TWO year old was awesome.

My THREE year old is Of The Devil.

I know, I know, I’m not supposed liken my child to a mythical creature that lives in a fake underworld because that’s NOT NICE AUNT BECKY, but it’s true. The THREE year old is a beast and the TWO year old was a living, breathing angel sent from heaven.

I think the Terrible Two’s are full of bullshit, Pranksters because with both of the boys, I never saw it. Maybe my daughter, who already throws tantrums when she doesn’t get what she wants, will prove otherwise, but I remain unconvinced.

This is pretty typical in my house now:

Aunt Becky: “I have to go to the bathroom now.”

Aunt Becky: (goes to the bathroom, is followed by Alex and Amelia)

Amelia: (begins shrieking because she believes that we should now pack up and leave the house on an adventure. She lays down on the floor and begins to kick and scream until the hallway is wet with tears and boogers) (also, you’re welcome for the free birth control)

Aunt Becky: (buries her head in her hands)

I know from years of dealing with a know-it-all ex-boyfriend that arguing with him is pointless so I just ignore him when he acts like that. Plus, he’s not sleeping, which isn’t making the situation any easier on any of us. It’s sort of making me want to send The Daver to get a SECOND vasectomy just in case this one didn’t take.

It’s a good damn thing that he’ll then counter all of his annoying three-ness with doing something full of the awesome like yelling, “LOOK AT MY BEAUTIFUL GERBER DAISY, MOMMY.”

Then I take a deep breath and remember that this too, shall pass. And I stop and smell the Gerber Daisies. 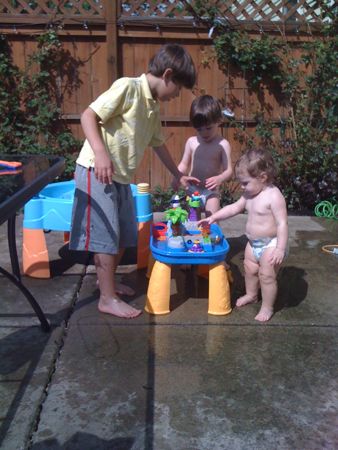 73 thoughts on “The Usage of the Word No”