Proving that I am a creature of habit, I couldn’t let the year end without completely my one and only meme. For past experiences, go here: 2008 here, 2007 here, 2006 here. The rest I believe have been lost somewhere. Probably for the better, eh?

I got myself a daughter, I watched my daughter go under the knife and defy all odds while I’ve struggled with some serious PTSD.

I’ve sent my second book proposal out with my agents and decided to incorporate and expand my freelancing career.

2. Did you keep your New Year’s resolutions, and will you make more for next year?

I’ve decided that I’ve put my own life on hold for long enough and that 2010 will be the year that I bring Aunt Becky back. Period. What that means is sort a nebulous “eh.” A constellation of things I’ll do.

3. Did anyone close to you give birth?

Yes. I had a baby. So did a lot of people that I love.

4. Did anyone close to you die?

An Empire and a discernible waistline.

6. What countries did you visit?

Unless you count my head, none.

7. What date from 2009 will remain etched upon your memory, and why:

January 28, my daughter’s birthday. February 26, the day she had her surgery to fix her neural tube defect.

8. What was your biggest achievement of the year?

I’ve successfully decided what I want to be when I grow up. An heiress.

9. What was your biggest failure?

I clogged the kitchen sink.

10. Did you suffer illness or injury?

11. What was the best thing you bought?

My iPhone is pretty fucking awesome.

I’d have to go with Mimi’s, who kicked BRAIN SURGERY in the balls. I mean, how much cooler can you be?

13. Whose behavior made you appalled and depressed?

Okay, this one I can’t answer because it’s mean. If I answer it honestly, I’ll get bitches on my back, and if I don’t, I mean, okay, let’s go with, uh, OH LOOK A CUDDLY KITTY!

I got excited when I figured out what the hell I was going to do with the rest of my life.

(if you haven’t heard it, you really, REALLY should give it a listen. It’s gorgeous)

17. Compared to this time last year, are you:

i. happier or sadder? Happier. Much.

Crying. Because I am very ugly when I cry and I pour buckets of boogies out of my head and really, you’re welcome for that mental picture.

20. How will you be spending Christmas?

This is awkward. Christmas is over, Meme. Perhaps you should GET WITH THE PROGRAM.

I’ll make up my own question here, then. Hmmm.

Name one random thing that people would be surprised to know about you.

I am a (former) concert cellist. I know. Who the fuck knew?

23. How many one-night stands?

If you could my Husbands From Television, probably like 4,129.

24. What was your favorite TV program?

Glee! And House! And Dexter! And…uh. What else?

25. Do you hate anyone now that you didn’t hate this time last year?

This seems awfully loaded, doesn’t it? I’m going to go with yes. And then, no.

27. What was your greatest musical discovery?

Glee! I’m a sucker for pop music and a capella groups.

30. What was your favorite film of this year?

Pan’s Labyrinth. I’m saying this because I seriously cannot remember seeing a movie this year.

31. What did you do on your birthday, and how old were you?

I turned 29 this year. I celebrated by… *scratches head*

Apparently it was very exciting. So exciting that I can’t remember.

32. What one thing would have made your year immeasurably more satisfying?

33. How would you describe your personal fashion concept in 2009?

My Internet. Thank you, my friends.

35. Which celebrity/public figure did you fancy the most?

I dunno. I normally answer with Britney Spears, and I guess that’s probably my answer again.

36. What political issue stirred you the most?

Shaken or stirred? GET IT? Bwahahahaha! I don’t go political. You should KNOW that, Meme, because we’ve been together since 2005. Which, CREEPY.

38. Who was the best new person you met?

My cadre of Virtual Internet Pimps.

When someone tells you that you can’t do something, the very best thing to do is to prove them gleefully wrong.

40. Quote a song lyric that sums up your year:

“I did my best, it wasn’t much
I couldn’t feel, so I tried to touch
I’ve told the truth, I didn’t come to fool you
And even though
It all went wrong
I’ll stand before the Lord of Song
With nothing on my tongue but Hallelujah”

So the rest of the meme calls for tagging, which I don’t do because I’m not A List person, so rather than tag you, I’m going to tag YOU to answer this meme on your blog OR in the comments.

“Now my friends are wearing worried smiles, living out a dream of what they was.

Don’t you think it’s sometimes wise not to grow up?”

In terms of blogging years, I’m practically a geriatric and I often have to stop myself from being all “IN MY DAY, BLOGGERS WERE HONEST AND DIDN’T EXPECT…” so I can safely say things like, “normally in my New Years wrap-up posts I say something about how happy I am to kiss the year goodbye” because I’ve had enough of them to choose from.

This morning, I sat here trying to figure out what I wanted to do for my New Years post because it felt weird to not mention that today is the last day of 2009. Normally I do the only meme that I ever do, but today it just didn’t feel right. Then I thought about doing a year-in-review-through-posts and that didn’t sum it all up either because seriously? January and February alone could have each had 10 or so links to posts.

So instead, I’m going to be uncharacteristically honest about my year.

2009 was not the worst year of my life. I don’t know how a year that started by bringing my last child, my daughter Amelia Grace Sherrick Harks, into this world could possibly be a bad one. I was so proud to finally have a daughter and nearly a year later, I am still so proud to have a daughter that even as I type this, my eyes fill with tears.

She was born with an undiagnosed neural tube defect, yes, an encephalocele and I very much feared that I’d birthed her only to send her in for neurosurgery to sacrifice her on the operating table, but would I have traded those three weeks with her? No. Even if she’d passed, I wouldn’t have traded those minutes with her. She’s my daughter.

Amelia, all 8 pounds of her didn’t pass on the table and she’s gone on to beat all of the odds of her grim diagnosis and has proved to me that just because someone tells you that you shouldn’t be able to do something, doesn’t mean that you can’t. It’s a lesson we all could stand to remember now and again.

While Amelia has thrived and continued to place at or above level for every single test that she’s been given, I’ve sort of managed to tread water this year managing to keep my head mostly above water. Lately, I’ve been drinking gasoline to keep warm.

I’m not sure it’s working.

I was diagnosed with PTSD stemming from her traumatic birth and I don’t know if it’s that, or PPD or some other weird acronym, but I’m not sleeping well or eating well, and some nights I manage fight off the demons and others, I’m slain by them.

But I’m hopeful. I’ve been here before and I’ve always managed to claw my way back out of the hole and into the light again.

So I approach 2010 full of renewed hope for the future, because no matter how full of the darkness I feel, I can feel the light on my face and I know it’s all around me. Soon it will be within me. 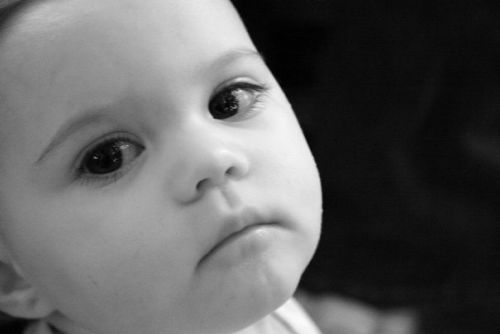