Recently, I decided to turn the room in which we shoved things into and closed the door before actually looking into my office. I’d been running things (for the Band (which is now up and running!), not my criminal empire – SADLY) from my thoroughly beat-up dining room table which was fine, until you take into account the “open floor plan” of our second floor. Then? You realize that a dining room, kitchen, and office don’t always need to be on the same damn floor.

I’ve waded through the stuff that you put somewhere else to deal with it sometime else and found that holy shit, Nathan is a hoarder. I began to slowly unbox things and put them where they’re supposed to go (seriously, I have an inversion table in here that looks to me to be some sort of rack used to pull people apart.

Mental note: don’t let kids use this. Or do. Whatever. Maybe it can make them freakishly tall (only freakish because Dave is an inch taller and our poor, poor, poor, short kids) It’s oddly imposing but definitely is big enough that it appears as though someone is also down here on the first floor paying rapt attention to me, which is a plus. No idea what the fuck I’m talking about? May I present to you THE RACK:

In the two years we’ve been together, I’ve never seen Nathan so much as glance at it, but here it sits, taking up space that should include those gigantic unicorns you can ride on. And bean-bag chairs. Obviously bean-bag chairs.)

In the midst of a clean-out that I will be honest about – it’s a “work in progress” – which is, what I think people say when they’re tired of a project they’re supposed to do, and it’s annoying and frustrating, and OMGBBQ Nathan has too much stuff, I gravitated to the best part of having an office: decorations.

As a reward for doing an excellent job with my “progress,” I wanted something totally cool for my office (besides My First Bacon, which oddly, we have TWO of) and Amazoned it right the fuck up. One of the first things I was drawn toward was one of those stupid but cute cardboard containers with lots of space for…erms… I don’t know – pens? paper clips? slide-rules? guns? tiny gnomes?

THIS particular one was a shade of blue I like AND had some succulents in it. I nearly screamed with glee – I’ve been LOOKING to do shit with succulents for awhile and they’re remarkable easy to grow – until, that is, I noticed in other pictures of this bullshit product, there were no flowers.

It was something you COULD do, if you wanted to.

I’m good enough with plants to know cardboard isn’t a great growth medium, unless you like fungus, in which case, I’ve got a shitton of boxes for you. But that idea never left the annoying part of my lizard brain that likes to remind me of all the cool shit I should buy, so one night, as Nathan was watching soccer and I was pretending to watch soccer, I went on Etsy.

Mistake #1. Now, I love me some Etsy, I really do. The problem for me is that I never know how to find anything on there and each item I come across makes me want a different, more wholesome life, where burlap and twine rule. While I rock at Amazoning and Targeting, I such at Etsying – which is probably best for my budget. Besides, I don’t REALLY need 37 wooden cut outs to adorn my wall with the word “blessed.”

Mistake #2. I went onto the site and typed in “box of succulents” which is what I’d wanted. Just a simple box of succulents to make my office, well, awesomer. When I put it in my cart, it said ONLY ONE LEFT, and so I HAD to purchase it right now, without looking at any other information about it. Yay! I crowed as Nathan began to yell “GOOOOOAAALLL” which is my favorite part of soccer.

I waited patiently (or as patiently as I possibly can, which is not much) for my box of succulents to arrive. The weather had freaked the fuck out, so I had to make sure to catch the delivery, lest my precious flowers freeze and die.

My box came one evening just as Nathan got home from work. Prettyish box (if you’re into brown, which I am decidedly not) and under the tissue paper, I saw my gorgeous succulents. Quickly I opened the (surprisingly light) box, ready and willing to warm the plants with my body heat and possibly let them listen to the rhythm of my heart, if they were feeling lonely after such a trip, and peeled back the scads of tissue paper. SO PRETTY. I was in the midst of instagramming them when I realized WHY the box was so light.

The product was exactly as described: A Box Of Succulents. The period, I think, should have been bolded so that dumb asses such as myself are prepared when you realize that you’ve just bought yourself ONLY plants. With no grow medium. With no stones or charcoal, no instructions, no nothing. Except tissue paper.

While the sensible side of my brain said to fuck it and let them live until they die, then toss ’em, the lizard part of my brain began to sob about sweet little plants bound to die a horrifying death alone. Would they be in agony or would they simply drift off to sleep peacefully? I didn’t know if plants had feelings, but I figured that ones as pretty as mine probably didn’t. Vapid, vapid things. But STILL.

(annoyingly painful aside: I very happily eat both vegetables and meat without feeling a bit of regret. You’ll never see me weeping into my poor, lonesome spinach before shoving it down my mouth hole)

The battle was won by lizard brain.

Back to Amazon, I went, dutifully buying the things I needed to keep the plants alive – sorta the way you feel when your kids win a fish somewhere and now, good fuck, you’ve got to spend $145 bucks on other equipment because a 10 cent fish is now your daughter’s favorite thing in the world and you can’t just let it diiiieee, Mooooommmm. 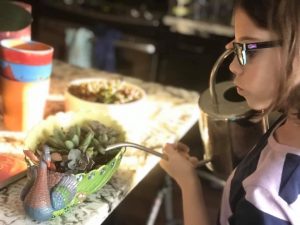 The plants (and the fish) are happily alive and will remain in my debt for the rest of their puny fucking lives.

The office, though, it’s coming together.