I knew it was bound to happen.

I popped out my crotch parasites well before most of my friends had steady boyfriends (birth control failure FTW!) because I like to win at life. See also: failed birth control.

Once I’d popped out the first crotch parasite, I realized that what I really wanted to do was to pop out more. I’m not saying my logic was failproof or anything (see also: birth control) but I knew I wanted my first kid to have siblings. What can I say? I’m a sentimentalist.

But I wanted the kid to have siblings, and luckily, he did. Five years later, out popped Alex, and two years after that came Amelia. Which means I have a fuck of a lot of kids, but alas, I digress.

That meant, of course, that I spent my twenties in Fug-Ville. While my friends were out being cute and sexy, I ranged in size from “Is she fat or pregnant” to “that girl looks like Grimace… only not purple.” Postpartum thyroid issues piled even MORE pounds onto my already chunky frame, which lasted approximately until their first birthday. Which = two years of Grimace per baby.

What I’m SAYING, Pranksters, is that I’m a sexy, sexy pregnant woman. You can call me Pregnasaurus Bex if you’d like. I don’t mind.

So now that I’ve gotten done with crotch parasites, I’m returning to the “OMG CUTE CLOTHES” and “UNDERWEAR THAT DOESN’T LOOK LIKE A SHIP’S SAIL” walk of life. Just in time to watch my friends obsess about every little pregnancy symptom or complaint.

I swear to you, Pranksters, everyone I know is gestating. Their Facebook profiles all show blurby ultrasound images of fetuses (fetii?) and updates include all the stats from each doctor’s appointment. It makes me GLAD I’m no longer gestating since my stats would look like:

What Baby Is Doing: Some various state of fruit.

Pretty much, you’d be bored even MORE shitless than you are by my mediocre blog. (my autocorrect wants to change “shitless” to “shirtless” which is actually awesomer.)

However, I feel kinda left out. I mean, I’d rather suck on an icepick than get knocked up again, but still, I want the opportunity to complain about my swollen feet and ginormous rack. Unless I have a Love Child, it ain’t happening.

Luckily, I’m crafty. I came up with a BETTER solution.

Pranksters, let me be the first to announce that I’m having a food baby. His name is Frank. 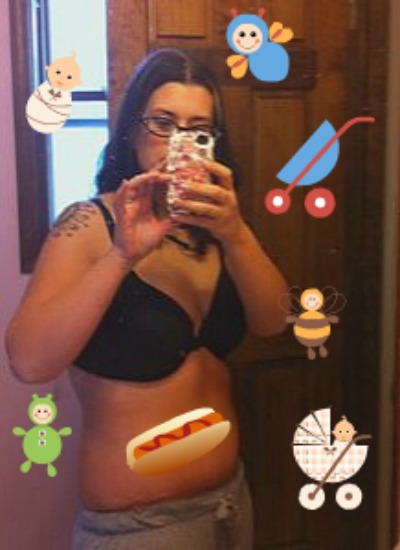 He’s gonna be a soccer player.

Also: who wants to throw me a baby shower? I can TOTALLY feel him kicking!

35 thoughts on “Pranksters, Meet My Food Baby. I Call Him Frank.”