I haven’t been happier that we pulled our son from the hippie nut ban! school. Okay, so I was happier the one time I realized that marshmallows did really weird things when they were microwaved, but I’m pretty sure that I was wasted at the time.

I was unsure of our motives, because, quite frankly, Dave and I stuck out like a pair of brightly colored, mismatched, rain-forest-chopping-down, as-far-from-eco-friendly-as-one-can-be-without-driving-Hummers thumbs. Now, it’s not as though we don’t recycle or love Mother Earth, because we do, and if you’ve been around for any length of time, you know that I garden like I drink diet Coke (read: obsessively). 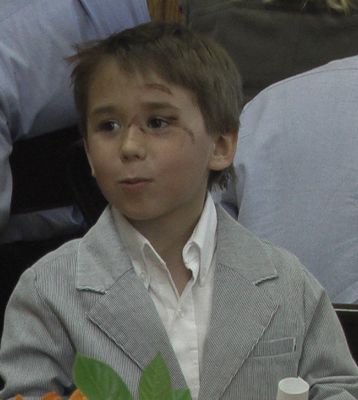 (the one time I’d dared pack a granola bar with tiny chips of chocolate in it–and I do mean TINY–he was singled out in front of the entire class and made an “example” for daring to bring “candy” to school. He was mortified. And six years old. It was my fault and I haven’t stopped feeling bad about it since)

We couldn’t get an answer as to what specifically this meant, and after repeated calls to the school, it was *shrugs shoulders* “you know, nut stuff.” If I’d been that parent, I wouldn’t have been so comforted by that answer, because it was clear the school didn’t understand nut allergies. As a nurse I did.

Icing on the cake.  Not the nut ban, but the way it was handled. I would have been scared shitless if that were my kid (turned out it was actually the SIBLING of a student) and frankly, I’d just had enough of their bullshit.

You know what they have there? They have an office staff. They have policies. And best of all?

THEY HAVE LUNCH LADIES.

Still working my nards off on my new group blog that you’re going to love, but in the meantime, if you want to get your group blog mojo working, I could use some help with Mushroom Printing, y’all. Turns out everyone wants to hide the site because they don’t want anyone knowing they write there. Which is HILARIOUS to me.

Also, do I only publish one post there per day? I can’t decide if more than that is going to overwhelm the feed reader people.

I’m talking about the time I accidentally bought a whole stash of Granny Panties over at Toy With Me today. I’m always taking ideas for my column over there, so if you have any, HOLLER.

91 thoughts on “Love Letter To A Lunch Lady, One Year Later”