(no, not a mail-order bride)

I was a waitress. Well, before that, I was a hostess and after I turned twenty-one, I bartended, too. In fact, working in restaurants is the only thing besides blogging that I’ve managed to do for more than a couple of months.

There was something electrifying about working in a place where so many people had to work in unison to achieve a common goal: namely, make as much money as possible with the least amount of effort. Of course, there was much effort involved. Carrying trays of hot food, trying to keep it on your shoulder, not trip over other servers while avoiding the crotch parasites that were always underfoot during the dinner rush.

The Us VS Them attitude (staff versus customers) united the lot of us. Didn’t matter who you were or where you came from, so long as you weren’t a jackass to the other servers.

You have some assbag at Table 65 staring you down because the kitchen fucked up your order and it’s late, and you get why they’re mad, but it’s not ACTUALLY your fault, but you can’t really explain that to them, because it sounds like a classic case of “pass the buck, SERVER EDITION?”

Send your friend, the one who can heap on the fake-sweetness without seeming insincere, over with their food when it pops up.

I worked in restaurants from the moment I turned 16 to age 23. The hours were flexible, which meant I could work weekends, and I’d make more money in a couple of hours than I’d make working all day in retail.

After work, the servers would sit around, drinking and shooting the shit. The sense of camaraderie made all of the bullshit we’d put up with worth it. We were an instant party, hitting up the bars that served late after we’d closed down. If you needed something; anything, you could count on the staff helping out. I have no doubt that if I’d murdered someone, my work friends would be there with black garbage bags and shovels to help bury the body. Without question.

Being a server also meant we fucked around a lot. There was the Pizza Suit we’d all take turns running around the restaurant wearing, the beers we’d sneak into the cooler and chug and this, the best thing ever.

This was the picture I’d carefully taped onto the front of my server’s book. I have to wonder how many people wondered what the fuck was wrong with me (more than normal). I’d never mention the picture to my tables, it was just THERE.

I stopped serving when I realized I was burnt out. Being asked for another Coke would be enough to set me off. I’d seethe as I handed them the Coke I’d ALREADY POURED.

HOW DARE YOU ASK ME FOR SOMETHING I ANTICIPATED?

But before I left, I learned how important tips are for a server.

In Illinois, at least, I made $3.29 an hour, minus 10 cents each hour for food (company policy). That $3.29 was taxed to DEATH, as the government assumed we’d make cash tips.

That meant that most of the “paychecks” I got were between two and four dollars. Every two weeks.

Occasionally, I’ve lamented that I never actually framed the checks I’d received for $0.00. Asinine. The company had PAID to print said check.

As a blogger, I never expected to make money. I do the occasional freelance thing, but the concept of “money” and “blogging” seemed as odd as blogging, itself.

I’d joined BlogHer ad network awhile ago and was content until I noticed my checks grow smaller and smaller as my readership increased.

I dropped them once the checks grew so abysmal that I was actually offended.

Anyway, last week, I got my final check. 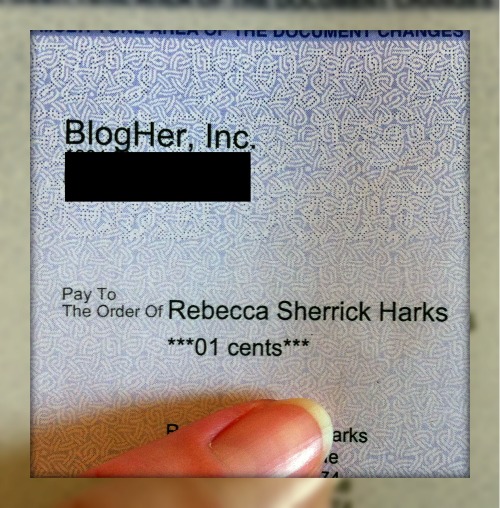 I am SO framing that.

49 thoughts on “Finally, Something I Can ACTUALLY Frame. Unlike Those Pesky Kid-Pictures.”