Rather than loll about the house in a narcotics filled haze (THEY ARE LEGAL, MR. DEA AGENT) occasionally hallucinating Cuban cabana boys (and, for that matter, a cabana), I am as tightly wound as a wee circus mouse on a crack bender. I’m desperately wishing that I had some houses to build or decks to pound together with my bare hands or perhaps a dozen orphans to care or maybe a small island to build with some dirt and a bucket.

This here, THIS IS MOTHERFUCKING BAT COUNTRY, Pranksters. 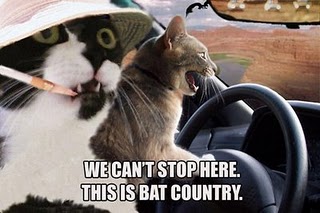 Or maybe I’m just on speed. And it totally and completely sucks.

I’ve never been on it before, but Ben had to take it for his chest years ago and I remember he was a total asshole whenever he was on it. Daver and I always dreaded it.

I’m just incredibly annoying to be around and I’ve apologized preemptively to anyone who deals with me on a regular basis because I’m now wired and COMPLETELY aggressive.

I am over at Toy With Me talking about how I annoyed a stalker into submission and shockingly, it’s safe for work, which means I am probably losing my edge and should be taken out back and shot.

108 thoughts on “Fear and Loathing in Urgent Care”