When I first heard of a television show where a vigilante serial killer murdered the bad guys that the police weren’t able to catch, I admit that I was intrigued. But I am also very cheap, so while I have basic cable, the premium channels, my love, well, I don’t have them. Shh, shh, there there, it’s not you it’s me! Why, I don’t even buy premium vibrators and those go on my cootch!

But I was intrigued. Because hello! Being a D-list blogger is ALMOST like being a vigilante serial killer except not at all, but let’s totally gloss over that, shall we?

Then I had some more kids and sort of lost my mind and forgot about you, current love of my life for as long as you hold my interest or your show stays on the air.

But it was like The Fates, or as I like to call it, Twitter, brought us together again when I asked them casually one night if I should maybe watch your show. The result was a unanimous “FUCK YES,” and so I did.

And I thought it was great, although I will admit to finding you more like a bumbling friend than a fuck-buddy. People who like to kill other people just don’t make my vagina tingle. But you’re charming in the very same way that my husband charmed me, so there’s something about very sweet guys like you and he that I find just ADORABLE.

So, Dexter, my friend, we were platonic for months as I dated such television husbands as Vincent D’Onofrio, Anthony Bourdain and Dr. House.

And then three things happened at the same time:

First, I got infected with The Swine Flu and required buckets of this: 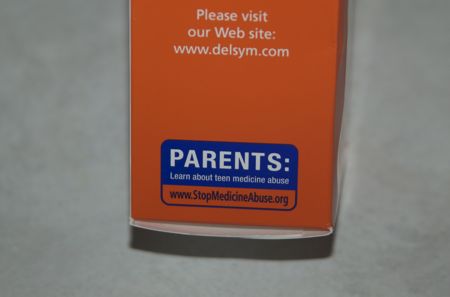 This is the Good Shit. The cough syrup that Daver gets carded for every time he goes to the store to buy it for me. Also, there’s a big fat warning label which means that if you take too much of it, it pretty much rots your brain. No, it does, so be careful.

At the same time, I managed to buy this: 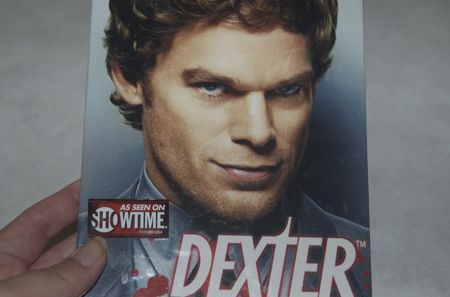 And I was all, This is full of The Awesome, it was on sale for like a gazillion dollars off which made me moist AND high and I justified it by saying that Dave could give it to me for Christmas! But then I left it on the kitchen counter because how depressing is it to hide YOUR OWN Christmas presents in your room?

So you sat there, beloved Dexter, where you looked creepily at me any time I walked by to drink this: 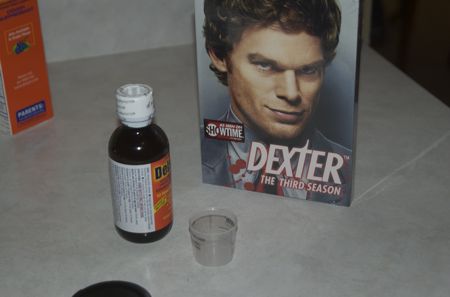 The last thing that tipped me over the edge was when I found this, while rummaging through the pantry looking for some purple flavored Kool-Aid: 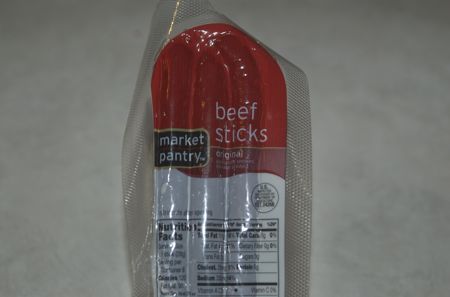 BEEF STICKS. The most repulsive, repugnant, disgusting thing I have EVER seen in my life. Not only were they NON-REFRIGERATED TUBES OF MEAT, Dexter, BUT THEY WERE GENERIC. While I am a connoisseur of most things encased-meaty, this, THIS was going TOO FAR.

I needed a new husband…

…..and cupcakes, FAST. Both were conveniently located IN MY KITCHEN! 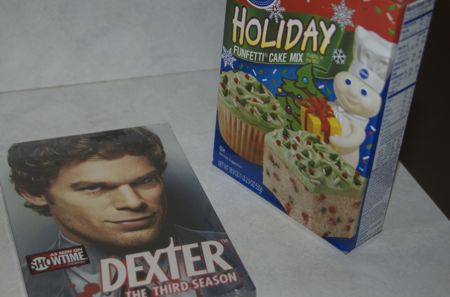 Because nothing says, “I love you and like to murder and maim bad people like sprinkley holiday cupcakes! They’re so festively gruesome!” Suddenly that sinister creepy look is kind of a come-hither look. I bet YOU don’t like generic beef sticks, Dexter. Because you are a man of EXCELLENT taste. 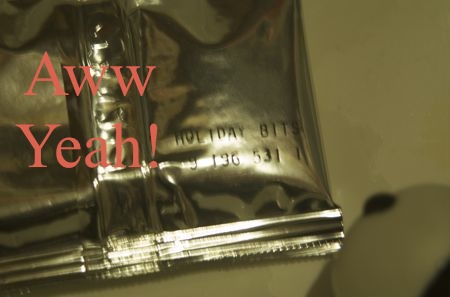 Dexter, I don’t know much, but I know that you must think that any bag labeled “HOLIDAY BITS” must be totally FULL of The Awesome just like I did. So when I opened this, I was fucking FULL of holiday cheer all of a sudden. It was like Christmas exploded in my kitchen and my funking pants. I was suddenly whistling “Joy to the World” out of my butthole and it sounded like a choir of fucking angels!

That, Dexter, is how a shiny bag of Holiday Bits makes me feel. 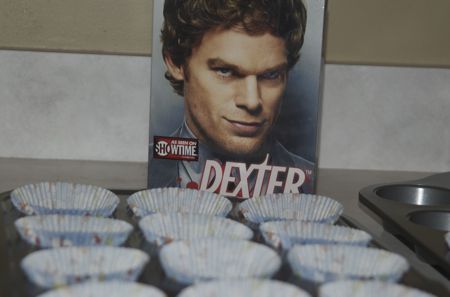 And look at my whimsical fucking snowman cupcake liners, Dexter! It’s like I have Christmas Spirit flying out of my every orifice like funky sputum! When we are married and you go off and kill people while I stay home and, uh, blog and sit on my butt offering up the illusion of doing things, I will occasionally do stuff that is so corny that it’s almost cute. Then I will pepper it with swear words and gross imagery and it will almost make up for the fact that I did something normal.

You’ll get used to it. 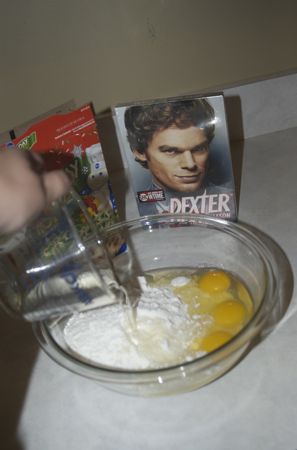 I swear that no one can add oil, eggs, or water as skillfully as me. Except for The Pioneer Woman, but she has a cookbook and I failed Home Ec, so there’s that. Don’t you agree, Dexter? OF COURSE YOU DO BECAUSE I HAVEN’T REMOVED YOUR SHRINK WRAP YET.

There, there, sweet-cheeks, I will. I will. Give me time. I am taking our relationship SLOWLY. 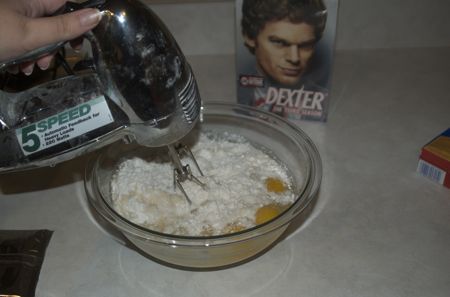 And look at me, all PHOTOBLOGGING. I swear, there is NOTHING I cannot do. Except for cook, and photoblog and really write anything of any value or, well, I could devote a blog to my many shortcomings, but that’s kind of depressing. Dexter, I am sure that you would want to see me beat things because you like to murder people.

SO LOOK AT ME BEATING STUFF. 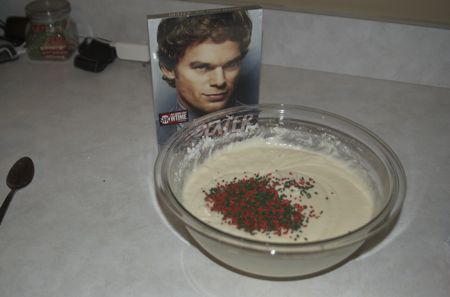 This is me, whistling “Joy to the Motherf*cking World” because we are in the presence of some HOLIDAY BITS PEOPLE! HOLIDAY BITS!

There is nothing like Holiday Bits to get ME in the mood for some festive fucking EGG NOG and maybe a whimsical light up REINDEER SWEATER that sings “Santa Claus is Coming To Town.” Because he KNOWS who has been NAUGHTY and who’s been nice. ME.

BRING OUT THE MISTLETOE, assholes! 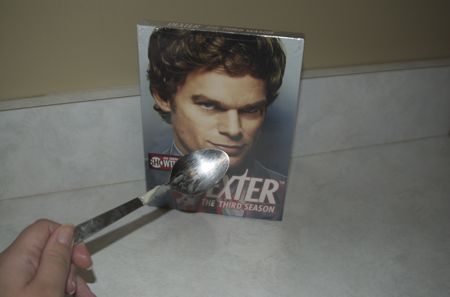 If you don’t like cake batter, you’re dead inside. I mean, I know you kill people for a living, but cake batter is one of the true joys of this earth if you don’t like it Sweet Baby Jesus will cry. Also, I will be forced to store the Beef Sticks on top of you. 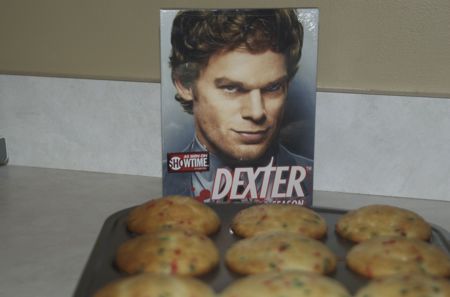 While at first, your look said, “I don’t know about these motherfucking holiday cupcakes, Aunt Becky,” your eyebrows now say to me “Not only do I love of the holiday cupcakes, but I also want to make desperate love to you. I WANT TO SHOW YOU MY HOLIDAY BITS.”

So to you, my new boyfriend, Dexter, I say this: steer clear of beef sticks and that fuck bag in Season 2 with the black hair because so help me GOD if she goes near you again I will kick her in the crotch.

I love you, never change, except win some Emmy’s and send me some diamonds. 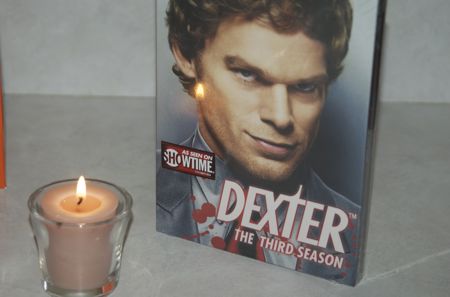 P.S. I mean it about the bitch with the black hair.