Besides, “how does ANYONE put up with you*?” and “would you describe yourself as more achingly or hauntingly beautiful**?” people are always interested to know why the fuck I call myself Aunt Becky.

Because I am Your Aunt Becky. I adopted you. Sorry about that. The upside is, the Internet is a large place and it’s entirely likely that I WON’T show up on your doorstep on Thanksgiving in a festive Christmas Sweater, reeking of vodka and vomit, demanding that you cook me some motherfucking stuffing because I have other nieces and nephews to annoy. The downside is that I might.

There’s plenty of Aunt Becky to go around.

But I wasn’t ALWAYS Aunt Becky. Before I was Aunt Becky, I was Stimpy on my old blog, Mushroom Printing, when I could remember to be all cloak-and-daggery about my name. Pashmina, who I talk about here as my college roommate and the person I humiliated with the Butt Sex Check, was Ren.

When I moved here, I was just Becky. Because it’s my name and it’s full of The Awesome the way it lilts off the tongue, you know? Anyway.

Proving my theory that people with half a brain can pick any-fucking-thing to be incensed about, one day I was commenting on a friend’s blog and I saw someone else named Becky. Well, I thought to myself. Her parents were obviously very smart for naming her that. She must be a rocket scientist with a name like that!

Skimming the comment left by my new friend–I already had our slumber parties planned out because we just HAD to be friends–I sighed when I realized that she couldn’t spell to save herself and her grammar appeared to have been pecked out by a blind mole rat, but I decided that in the name of our friendship, I’d forage onward!

Several days later, revisiting the blog of our mutual friend, I happily checked the comments to see if my new BFF had commented, eager to see if she’d seen that she had a friend in me! I was shocked to note that where the space for “name” had been previous filled with “Becky” it now said “THE REAL BECKY” and the comment made hideous references to an IMPOSTOR BECKY.

Then she had the audacity to make some snide remarks about me and the “cussing” on my blog and how tasteless I was!

Oh HELL NO Becky, oh HELL NO you didn’t. For your information, I do not “cuss,” I fucking swear. I will be put down by someone who can spell without the aid of a spell checker, and I will happily correct my own grammar with a motherfucking SMILE on my motherfucking face when it’s pointed out tactfully to me, but I will NOT be put in my place by someone who accuses me of PRETENDING to be some toothless mouth-breathing, knuckle-dragging, slack-jawed yokel who happens to go by the 22nd most popular name of 1980. The year I was born.

What, you want proof or something? 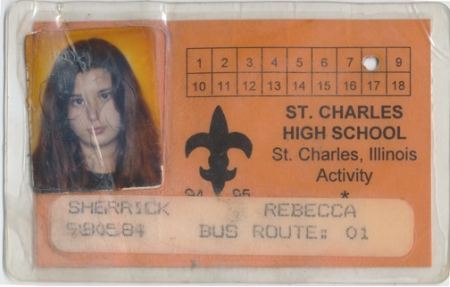 No, I am not cross-eyed. It’s the water damage distorting the view of my AWESOMENESS. And no, no one had just threatened to kill me if I smiled. SHOCKING.

Maybe I was just remembering my earlier years. Like this one: 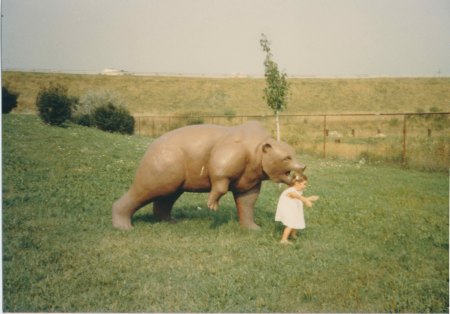 When my parents had BRUTALLY made me pose in front of a bear like that. Look at the mock terror on my toddler face!

Or maybe I was thinking about this: 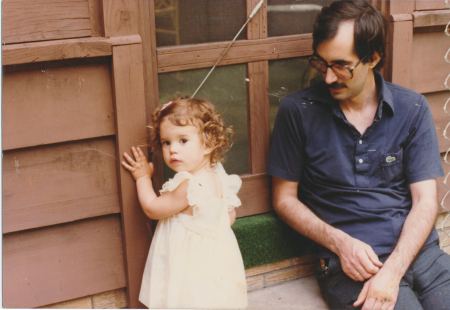 The time when I was left with the creepy guy who I wanted to get away from.

(he was actually my dad, and I was TRYING to get into the greenhouse)

So, I figured that I’d have a couple of different personas for my blog and change them around depending on my mood. I’d be Smoove B one day, Aunt Becky for a week and The Notorious BEX the next. Sometimes, I’d just be Becky, As Herself. Or Becky, In Real Life.

Well, guess which one stuck? (hint: it’s not The Daver) Can’t be all bad. Especially since it means that I’ll never have to cook for the holidays ever again.

Are you a nickname person on The Internet? Do you go by something else on your blog other than your real name? How did you come up with your nickname? Also, should I cock-punch The Other Becky***?

*Bad karma in a past life OBVIOUSLY

*Why have OR when you can have AND?

***I swear on all that I am that I am not lying. If I could find the blog, I’d show you the comment but I never went back because I knew my head would explode.

64 thoughts on “The Evolution of Aunt Becky”