I’m sorry that I know that I was a late in life OOPS baby and that I was conceived on Halloween* because really, what kid wants to know that stuff? The bonus to that, I guess, is that my parents weren’t exactly living in an abandoned barn by the time I was popped out, and while I didn’t didn’t have a safe full of golden coins and jewels that I could swim around in, I don’t remember going without.

My petitions, though, to build a safe full of golden coins and jewels were repeatedly denied as were my petitions to buy a Rolls Royce and re-carpet the whole house in mink. While they preferred teak and understated mahogany, I liked tinsel and glitter. I would have made an excellent glam rocker had I been able to tease my hair or have it ever hold a curl.

When I was 4 or 5, I decided that what my wee heart desired for Christmas more than anything else was actually something normal. Which, for me, is saying a lot. Instead of asking for a tiara with actual diamonds or my own phone line, I asked for a train set. A wooden train set.

My mother was a hippie tomboy and in hindsight, I’m shocked that she didn’t latch onto the idea and go running with it. I’d have thought that my normal requests of wearing princess dresses and patent leather shoes had left her weak-kneed enough that this should have been her cue to try and convert me to the Other Side, but no.

For some reason no.

Not for my birthday that July either.

Or for the next Christmas. Or my next birthday.

I’d play with the sets that they had at the toy stores that my mother brought me to, and sadly leave them behind when we left. By the time I turned 8, my grandfather bought me an electric train set which I fell in love with. But, I broke it because I am the reason we can’t have nice things.

Turns out that my mom has been feeling kinda guilty about not buying me that train set all of those years ago and I never forgot how much I wanted a train set. When Ben was younger, she’d bought him some parts of a train set, but he never really played, well, okay, I’m just going to say it because then you guys can shock and gasp, HE NEVER REALLY PLAYED WITH TOYS.

So now, for Christmas, they are going to wake up to this: 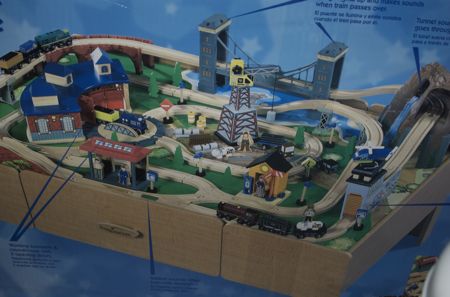 This is me, fulfilling my childhood dream through my children through my mother’s bank account.

Next up, EZ Bake Oven, which my mother claimed was stupid because it “cooked the cake with a light bulb**” and a Power Wheels. Because if I can’t live vicariously through my children, WHAT GOOD ARE THEY?

I mean, besides to make do the annoying chores that I don’t want to do myself.

Did you have any toys that you didn’t get as a kid that you plan on buying your own kids? Or are you a better person than I am that can rise above material urges?

Also, you should join my group Aunt Becky’s Band of Merry Pranksters (turns out you DON’T have to be my friend, just join my group) over at The Savvy Source and enter to win Stef’s book by leaving me a comment here. Because OBVIOUSLY.

*if I were goth, can you imagine how awesome I’d feel? I would SO rock the black eyeliner and be all morosely “it’s in my blood” when people made comments about listening to The Cure’s Disintegration for the 30th time in a row.

**That IS kinda dumb.