Back when I had a life that could be documented in things beyond “seasons,” I took ridiculous amounts of pictures of myself doing bizarre things with my friends. I also threw outrageous parties, got drunk a lot and took more pictures of questionable quality. In short, my life was pretty much full of The Awesome.

Only problem was, I managed to somehow throw away the photo album that documented a lot of my more ridiculous times and while I don’t normally care about things, beyond my iPad, iPhone, iMac and Britney Spears Singles collection, I mourned this heavily. I had no digital copy of these exploits and my friends, while full of the awesome, had no copies of these pictures either.

So while I could TELL you that I did hilarious, nefarious things, I could also tell you that I’m really British royalty and then I could try to sell you shit.

Probably the best thing my mom has given me in years was a box of crap that we’d thrown in her basement years ago when we moved. In it was a couple of framed pictures, including one of me looking like I was about to have sex with a cup of Diet Coke (which, I mean, could be taken today), a picture of Ben in diapers, and an old wedding magazine.

At the very bottom, was my photo album: Aunt Becky, The Lost Years!

I nearly cried, except for crying is really lame and pointless, so instead I hid and looked at the pictures and marveled at how fun my life used to be.

Like this trip to Mexico that I took with my friend Jessica. We were both waitresses at the same place, and she was like the little sister I never had. She’d somehow managed to convince me to go onto a Party Bus and this was the Night Before Shot, taken right before I’d somehow found a cabbie to take us home.

See, she was so beyond drunk because she was 18 and thrilled that she could drink as much as she wanted that I couldn’t even count on her to help me find our crappy hotel, so I had to pool our money and find us a cab. Trouble was, I don’t think we had enough money and the cabbie probably put a hex on us because we were so annoying. Actually, I don’t remember getting into our room at all. Hm. And this was the Morning After Picture, right before we went down to the pool to start slamming tequila again. Hair of the Dog, baby. 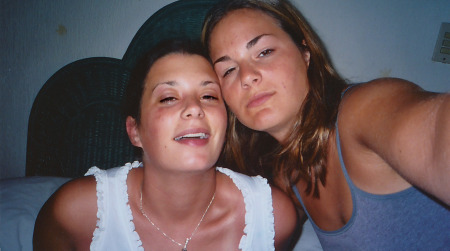 Clearly, we are sexy broads. You know you want us (also: so much for the theory that bloggers only post very flattering pictures of themselves) to come over and drink your booze and then wake up in your bed looking like THAT. HA.

Now I can manage that same look WITHOUT having been wasted the night before. THANK YOU, my children. THANK YOU.

I share my most humiliating story over at Toy With Me today. It’s a doozy. You’d better come hold my hand, yo.