One of the first things my friend Ashely said when I started to date someone new was, “Has he seen a full-on Becky outfit?” She wasn’t trying to be mean, just curious at how a guy would take my funky sort of “did she get dressed in a dark closet and intentionally go out looking that way?” sort of style. Part of the problem is that I’m colorblind. The other part of the problem is that I’m unabashedly tacky.

So you know when bloggers do style blogs and they’re all “these are my favorite things” and you’re all “holy shit that’s awesome” because it’s awesome and you realize you have no style and/or no money with which to buy style? This is pretty much the reverse of that. This blog should make you feel like you’re the most stylish person on the planet.

Exhibit One: My Belt 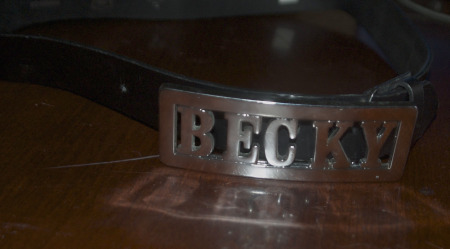 That’s right, Pranksters, a belt with my motherfucking NAME on it. Why? Because I can. And do! It’s a multi-purpose belt, really, because not only does it announce to the world, “Hey World, I have a name,” IT TELLS THE WORLD WHAT MY NAME IS! Then, when I forget my name, all I have to do is look down and BOOM, THERE IT IS. (kinda like WHOOMP, THERE IT IS, but not).

The only thing that would make this gem of a belt better would be if it were encrusted with bling.

(bonus points when I give it to people to wear who are NOT named Becky because it’s just hilarious because OBVIOUSLY).

We all know that I might aim a little higher than I should when it comes to the men I date in my head and nowhere is that more evident than my Mrs. Timberlake hat.

In hindsight, I think I’ll get my next one to read: “MRS. DEXTER MORGAN” because I think I find the concept of being married to a serial killer more appealing than being married to a former boy-bander. Either way, the hat, it’s hot. You know you want it AND YOU KNOW YOU CAN’T HANDLE IT. 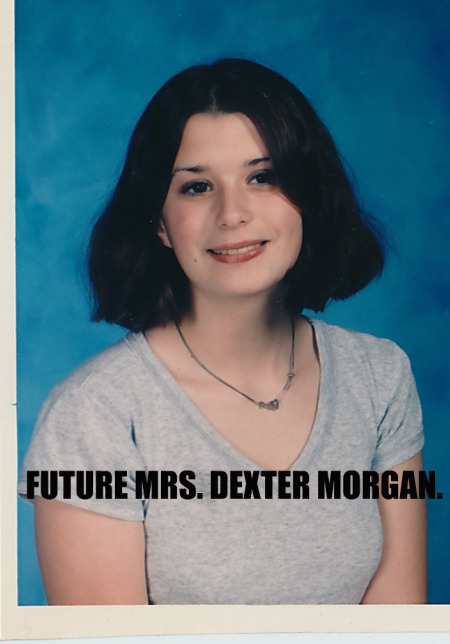 P.S. Maybe I could have gone TANNING before I got this picture taken. I’m pretty much Edward Cullen’s relative without the sparkle.

Mimi couldn’t handle the greatness of the hat, see? 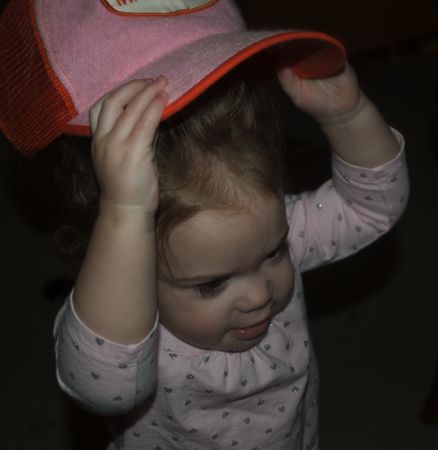 She had to take it off before the AWESOMENESS of it burned her. 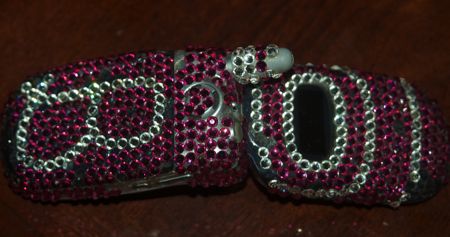 Hello hello baby you called I can’t hear a thing I have got no service in the club, you say? say? Wha-Wha-What did you say, oh, you’re breaking up on me. Sorry, I cannot hear you I’m kinda busy.

Actually, I wasn’t ka-kinda busy (yes I was), it’s just that my crystal-coated cellphone had a tendency to drop calls almost as much as my iPhone does. But do you see the looping, poorly executed “B” on there? Oh yeah, that’s right Pranksters, Your Aunt Becky did that. Badly, even. This right here is evidence of why you should never do yourself what you can pay someone else to do for you.

Gluing a gazillion tiny crystals onto a cellphone in a pattern that can only be described as “pathetic” isn’t something that I would recommend, even if the glue did give me a wicked high. But oh, how I loved on that phone. The crystals added a good five pounds to an already ridiculously heavy phone (you had that phone too, I know, because EVERYONE did) and they flaked off, leaving an odd Cinderella-style trail of pink crystals back to wherever I was, and they messed with the reception and my ability to make and receive phone calls, but I didn’t care.

Because that phone was where the MAGIC HAPPENED. PRETTY PRINCESS CRYSTAL SPARKLE UNICORN MAGIC!! Just as soon as I get my new iPhone and find someone who can properly bling it out, you bet your ASS Imma do it.

So there you have it, Pranksters. Several of the things in my closet that will never find their way into YOUR closet because you are FAR more tasteful and refined than I’ll ever be. Because OBVIOUSLY.

The contest to win the Flip MinoHD is on until Saturday and can be found here, under my TOP SECRET PAGES.

Today, over at Toy With Me, it’s my second installment of my Bondage Conference! Part One! Part Two!

114 thoughts on “Any Day Now, Vogue Will Be Calling For Fashion Tips”