I read somewhere, probably on the Internet, or maybe I saw it on one of those wacky sitcoms that divorcing people are supposed to throw things around, hurl objects in the general direction of the other person, and generally yell, scream, and glower at the other while such things as “who gets the ginormous television?” and “why do you want a ginormous television that will take up your shoebox apartment, Becky?” Life might be more interesting that way, but the last time I tried to throw something at someone, I screamed, “Fuck you, motherfucker!” and lobbed a full large Diet Coke at his head. While he was sitting less than one foot away from me, I hit the car window, and the soda didn’t even rain down upon us like a delicious heavenly rain.

Since then, my objects of choice when I’m ready to break things are box fans, which make a nice satisfying THWAP when I kick them, only to realize that I’ve broken three toes and the fan is still sitting intact, mocking me with it’s Made in China sticker. Hurling things is clearly out of the question, as I’ve demonstrated that I’ve managed to hurt myself fairly badly on bubble wrap. BUBBLE WRAP, PRANKSTERS. That shit is SOFT.

(tell that to my finger)

(that’s what SHE said)

Since the time for hurling and lobbing of objects is long gone, and Dave’s birthday was this weekend, I suggested that we go out to a nice dinner, full of NON-scathing looks and celebrate. Everyone should have a party on their birthday, right? Right. (you may surmise that I both love and hate birthdays and you’d be correct – even my shrink informed me that he, too, likes to pretend that his birthday doesn’t exist, which made me feel a little better about changing the date on mine so often that I have to pull out my driver’s license and see, YUP, was actually born July 15).

“Hey,” I asked Dave on my way out the door on Friday night. “Can you make us some resos for Saturday night?”

Because, when I was very young, my parents removed my bladder and replaced it with a squirrel’s bladder, it took me a good 12 minutes to pee three times before I actually manged leaving, which made me shake my fists at the sky at the squirrel who’s living out there, having to pee once every seven years, before I heard Dave howling from the next room.

“Capones is closed,” he said, when I came in to see what the ruckus was about.

“Whaaaaa?” I couldn’t believe it – it was a staple out here. An old restaurant fashioned out of one of Al Capone’s Speakeasy’s from the roaring twenties, before he died of VD.

“Like for good,” he replied. “I think the owners retired.”

I made a glum face as he suggested one of his favorite sushi restaurants. “Works for me,” I replied, finally out the door.

The day of his birth dawned without me recalling it was such, which made me feel like a shitheap – who forgets birthdays? Apparently, that answer is Yours Truly. “7:00,” he said as I poured my morning coffee, heading to the fridge to dilute it with milk – Dave makes coffee that’s so strong it curls your hair and makes you shudder.

Sheepishly he looked at me, “Sorry,” he said. “I drank the last of it in my coffee.”

“S’okay, I’ll improvise,” I replied as I grabbed an ancient bottle of SlimFast. I poured it in, noting the chunks that plopped into my coffee and stared sadly at my now-chunky coffee.

The rest of the day, I spent in my garden, painting my roses a decided shade of pink, while some dude rubbed Dave with oil and massaged the kinks from his neck.

6:30 rolled around and I noted that Dave was, in fact, sitting on the couch and looking at me expectantly. “Shit,” I hollered as I flew up the stairs. “Getting dressed now!” I threw on whatever didn’t smell like it had been IN the garden and made my way back downstairs and out the door.

We rolled into the sushi place about 10 minutes prior to our reservation and sat in the bar, where I stared at the photo I’d taken when I walked in, hardly believing vending machines, one of my favorite things on the planets, had failed me so miserably:

Finally our table was ready, which was good, because I was about to cry about the stupid Vending Machine with JERSEY FUCKING SHORE in it. We ordered our dinners and sat back and talked about this, that and the other, the idle chit-chat you do when you’re talking to someone you know well. It’s a good thing, I guess, we haven’t been fighting, because I had at my disposal, about three hundred different things that could’ve been fashioned easily into weapons all American Gladiators-style.

Instead, I took a picture of my soup for one reason (and not because it was tasty OR delicious):

That’s a nice reminder that taking pictures of your food and making them look NOT like piles of baby barf requires a professional photog. NOT EVERYONE CAN BE A FOOD BLOGGER.

Then, because it’s the right thing TO do, I made sure everyone knew it was Dave’s birthday, which meant a half-dozen Japanese people would sing him happy birthday in butchered-English. He loves to be embarrassed by me. He just never SAYS it, which is how I know.

I also made sure to take as many embarrassing photos as I could, which, unfortunately with my broke ass iPhone, didn’t work too well. But here’s the only one I got: 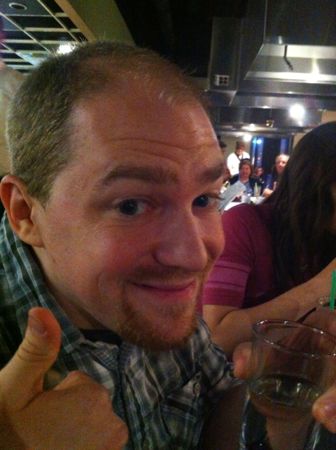 The thumbs-up were my idea – gives the impression you’re REALLY happy! You can tell he’s happy – not at all annoyed by me – by the look on his face!

I can hardly wait for the next year. I’m thinking singing, stripping, male telegrams.

18 thoughts on “Another One Bites The Dust”