Let me start by saying you, Ms. McLachlan, have an impossible name to spell. I spent upwards of thirty whole seconds trying to ascertain whether or not that word grouping was properly spelled or a jumble of letters. That, however, is merely my issues with words, Sarah McLachlan. See, Sarah, I’m sorta illiterate.

I’m here today, Sarah McLachlan, to talk, not about your complicated name, but about you. Namely, how you ruined my day.

Mostly, because your lilting voice sang about all of the angsty shit that those of us who were both angsty and in possession of a vagina felt. Sadness. Emotions. Lame-ish songs (sorry, not your fault) that we could be all, OMG SARAH MCLACHLAN KNOWS WHAT I FEEEEEEELLLSSS.

I can’t say I much followed your career after I sacked up, but I was proud that you created that Lilith Fair, because I like a powerful woman, Sarah McLachlan, I like them very much. I heard a few of your songs on the radio, and while I never turned them UP, I rarely turned them off – see, Sarah McLachlan, I’m a sucker for a pretty voice. And that, my friend (can I call you my friend? Great – thanks), you do have.

You and me, Sarah McLachlan, we were friends. Or at least I thought so, until you released this particular bit of horror that’s since haunted me. Picture this, Sarah McLachlan: I was at home with my wee new babe, and I had one of two options – I could watch television or I could stare at the wall while I nursed him. He was a boob man, my guy.

Postpartum and hormonal, not to mention sleep-deprived, imagine my horror when this came onto my television:

I’ve never, ever gotten over it, Sarah McLachlan – the sad puppies, the hurt kitties, it was too much for me. I began to weep, which annoyed the hell out of my baby. That commercial, starring you, Sarah McLachlan, and a bunch of pathetic animals, seemed to play whenever I was at my lowest.

And the tears, my good friend, Sarah McLachlan, they flowed.

It’s January, and aforementioned baby is nearly five, but I wanted to tell you that I caught the tail-end of your ASPCA commercial, Sarah McLachlan, and I wept. You have no way of knowing, Sarah McLachlan, that January is the worst month of the year for me – that I’d like to curl up in a ball and wake up sometime in February. But your commerical, Sarah McLachlan, it nearly broke me this time.

And at the very least, you ruined my day.

So, Sarah McLachlan, thanks for that. 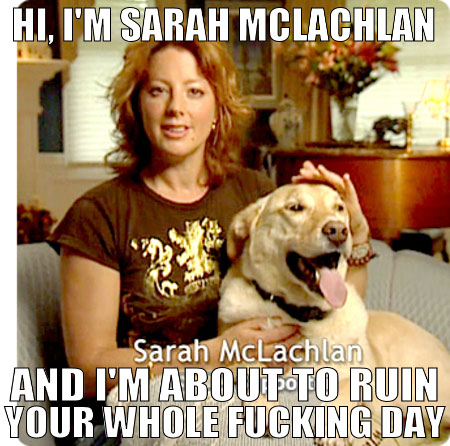 140 thoughts on “An Open Letter To Sarah McLachlan”