Besides, most of you read me in a reader (when the reader is working properly *angrily shakes fists at the sky*) and that ‘mark all as read’ button is just so damn handy.

After I got a house, I got a dog. Well, no, let me rephrase that. I got a dog that is actually a ficus in dog’s clothing. Sure, he may LOOK like a corgi/beagle mix/stuffed sausage, and his breath may smell EXACTLY like a vagina, but I assure you, o! wise, Internets, he is a house plant.

May I present to you Exhibit A (I’d add more shots here, but the only things that change are location and the length of already insanely-long page load time. Which I do not know what to do about): 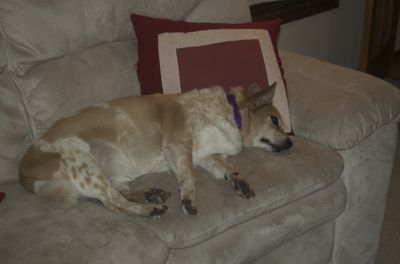 Before you alert the authorities, Internet, let me assure you that this is not a dead, taxidermied dog that I’ve inexpertly displayed on my couch. No, this is how Cash lives, 98% of the time: he naps on the couch, suns his belly, licks his pooper, and then rounds it out with a snack and another nap.

So to all of you Dog Trolls who drop in to critique my Crappy Dog Skillz, let me assure you, Cash pretty much has a life that I want.

No intruder is going to be terribly deterred by the rancid vagina smell coming from his mouth or the awesome way he can totally nap while laying ALMOST entirely on his back, so yeah, I had to come up with another strategy.

The cats, although fiercely annoying as they yodel and scream hello to anyone and everyone and occasionally just for the hell of it–often scaring people into thinking that I have small children trapped on various floors of my house–which yeah. They might end up tripping someone in a desperate plea for attention as a potential Bad Guy (or Girl, let’s not be Sexist Here)

Then we got Auggie, The Most Feared Dog in all of The World, and by “most feared” I mean, he’s effing adorable and if you saw him you’d be all “squeeeee! Lemmie take him home!” and I’d be all “BE MY GUEST!”

And as you were leaving with him, I’d say all ominously, “You do know he eats poo, right?” and then you’d take a scalding water bath with a brillo pad and refuse to take my calls. But he’s cute and he weighs 16 pounds, and his only real defense tactic is that you don’t want his tongue on your person because it has recently eaten poo straight out of the butthole of another dog.

That’s right, he likes his poo ON TAP. 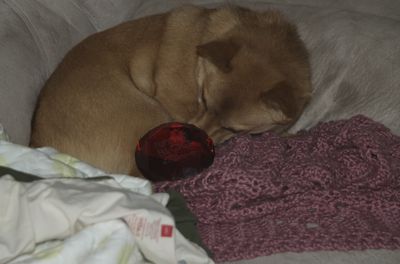 And The Daver, God Bless him, isn’t here very often, and let’s not forget the curious incident of The Thing In The Garage In The Night-Time, shall we? Dave weighs all of 45 pounds soaking wet (knock off the Jack Sprat jokes, people, I’m losing the mother-fucking weight) and, well, he’s as intimidating as a wee baby sheep. Actually, I take that back, a baby sheep is probably scarier.

So I did what any average suburban housewife with waaay too much time and science background and radon would do!

Naturally, The Devil was in the mother-effing details and I planted them in the BACK of my house instead of the FRONT of my house, but, you know, those wily burglars can come from any given angle, right? 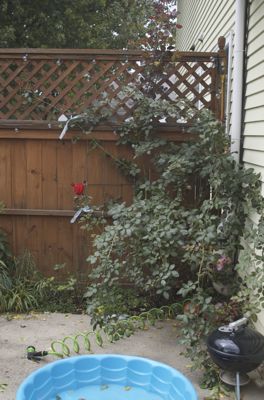 You can see that my ATTACK ROSE has already eaten a soccer ball, a hose, and is working it’s way both towards a kiddie pool AND a Smoky Joe. It’s THAT full of Desire To Maim And Destroy.

(if you look closely, next to it is another rose, the Attack Rose of DANGER! is pink–naturally–which is thumbing it’s nose at the autumn weather and blooming like crazy. That rose, it has spunk)

Why sure, it has been pumped full of radiation: 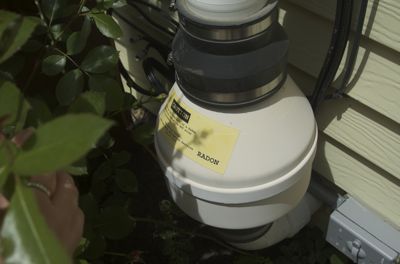 But really, it’s not actually (read: sadly) been genetically altered. It’s a climbing, “rambling” rose. Which, for someone like me, whose favorite song was once The Dead’s “Ramblin’ Rose” makes me very happy.

It is also a HELL of a lot cheaper than a personal home security system. I guess this means that we can return Auggie, eh?

How was your weekend?

53 thoughts on “A New Dateline Special: When Roses Attack”