Now, I don’t know if you knew, but if you want to be a successful blogger, you’re supposed to have an advanced degree in photography. At least, that’s what blogs like the omniscient Dooce and the ever-present, always delightful, Pioneer Woman have taught me. Well, that and I should probably make some shit homemade or roll around in a tub of butter or something, but I stopped listening at “photoblogger.”

I grew up in a photogs household. No, not the kind trying to get beav shots of Brit-Brit as she gets out of the car, but the people who have darkrooms in their basement, the smell of darkroom chemicals wafting from their pores. Every holiday, every given Sunday, any day of the week found my father, brother and grandfather, all with dueling cameras, trying to snap pictures. I don’t know how many holiday dinners went (quite literally) to the dogs as we were forced to pose, then pose again, then repose because “the light’s not right.”

I was primed to grow up with a camera in my hands or convinced that, in my formative years, I was a child star.

You know which happened.

Back in Aught Five, I had The Daver buy me a Christmas present – a DSLR. I figured that it’d be like osmosis – I’d grown up with a lens in my face, there was NO reason I wouldn’t magically understand the 8274-niner dials and begin speaking about “apertures”and “light quality” and “winning at life.” Except that, well, even with Ashton Kutcher (who was not QUITE so douchebaggalicious back then) selling me the thing, I still wasn’t much of a photog.

I mean, I got the idea of what composed a good picture, but did you know, Pranksters, that DSLR’s weigh approximately 250 pounds? With cameras out there the size of a granola bar, who the shit wants to lug THAT around?

(answer: other people who are not me)

But, since I was stewed in the embryonic waters of photogs, I did learn a bit about photography along the way.

Without further ado, here is Aunt Becky’s Guide to Photo-blogging:

First, one must capture their subject. In doing so, it must be referred to “subject” possibly using the term “medium” just because it makes you sound like a fancy person. 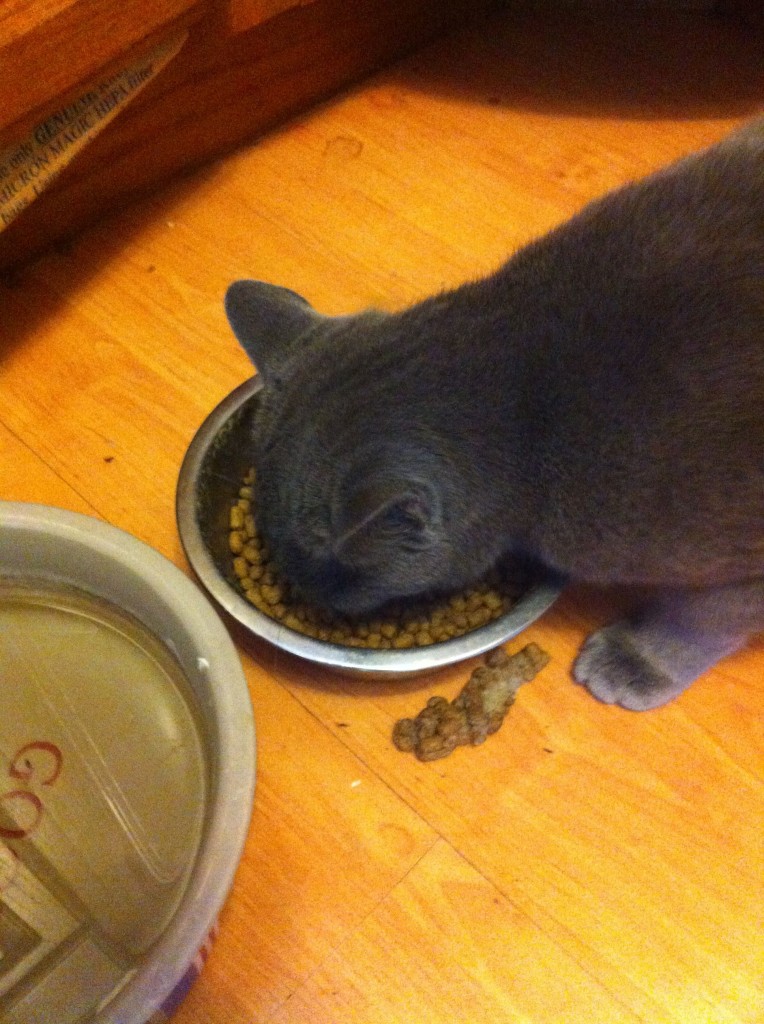 While you may note that there is, in fact, a cat in this shot, the shot was not for the cat. Because that is NOT my fake-dead cat, Mr. Sprinkles, but my perfectly alive cat Chloe, who is both stupid and possibly brain damaged.

First things first. Watermarks. That’s YOUR way of saying, “don’t steal my shit, shitheal,” because obviously adding that to a photo means you KNOW what you’re doing. A lot of bloggers employ this technique:

While that’s all well and good (supposing you don’t think people will just cut that bit of useless blather off the oh-so-coveted picture of cat vom, I much prefer THIS approach: 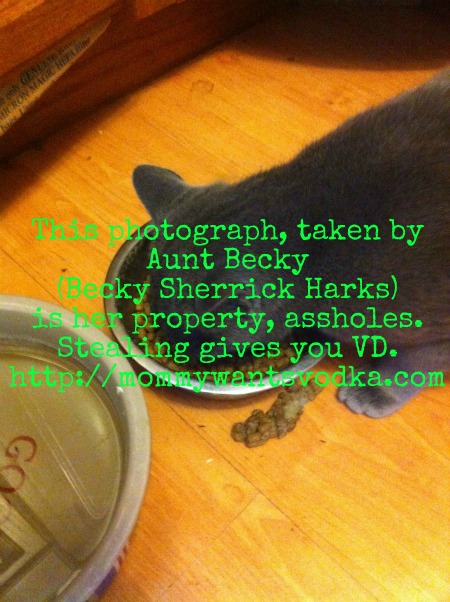 It’s ugly. It obscures the photo. And it says, “DON’T STEAL MY STUFF, SHITBREAD.”

Anyway. Watermark aside the subject of this particular photo would have been unclear, would I not to do this, a technique I like to call the “Captain Obvious Technique:” 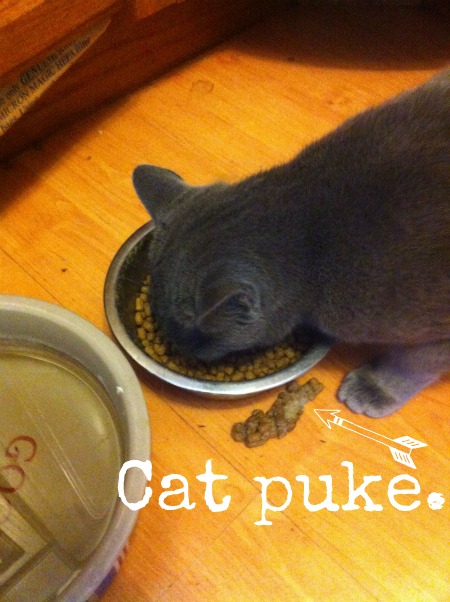 If I hadn’t done the Captain Obvious Technique, you may have erroneously believed that I was talking about my brain-damaged cat Chloe, her water bowl (which says, “Good Dog,” which I find hilarious), or, perhaps, my floor, which is in desperate need of replacement.

Using the Captain Obvious Technique, I left NO room for error. Not only did I inform you WHAT you were to be looking at, I was sure to POINT to it, so that you weren’t under the impression that the cat puke was anywhere but by the arrow. I find that really helps one appreciate fine art.

But why stop there?

There is so much more to be done.

For example, we could make my brain-dead cat Chloe talk! 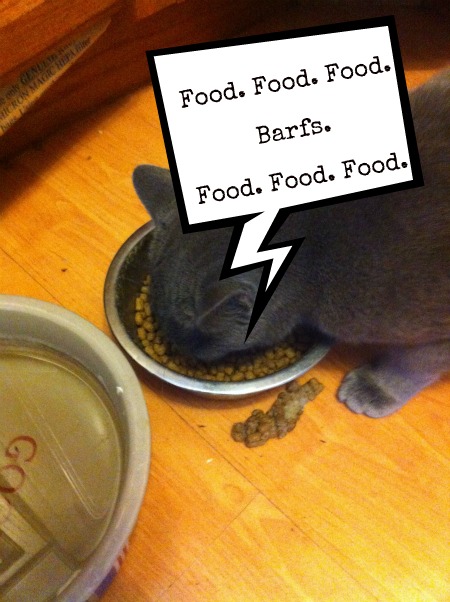 By rearranging thought bubbles, I was able to capture that Chloe might be a super-genius, while the pile of puke is an angsty teenager.

But WHY STOP THERE? There’s so much more to be done. If one wants to be a TRUE photoblogger, one must be willing to make it ARTSY. 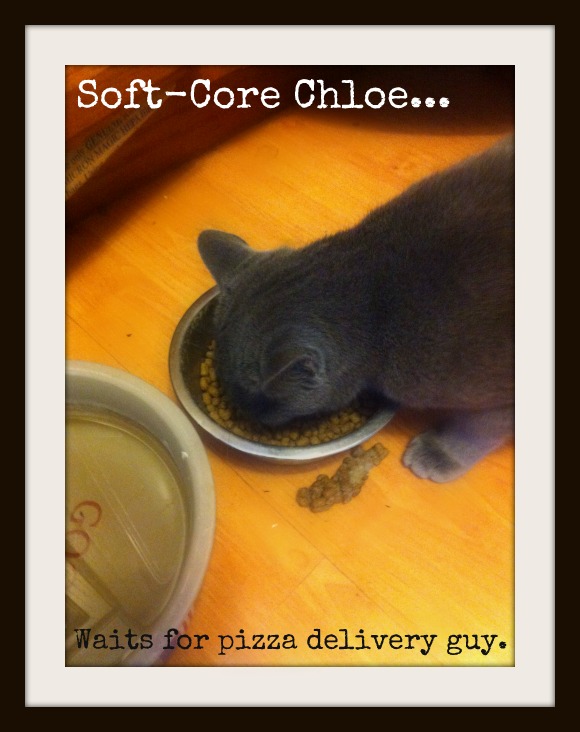 And never, ever be afraid to mix mediums: 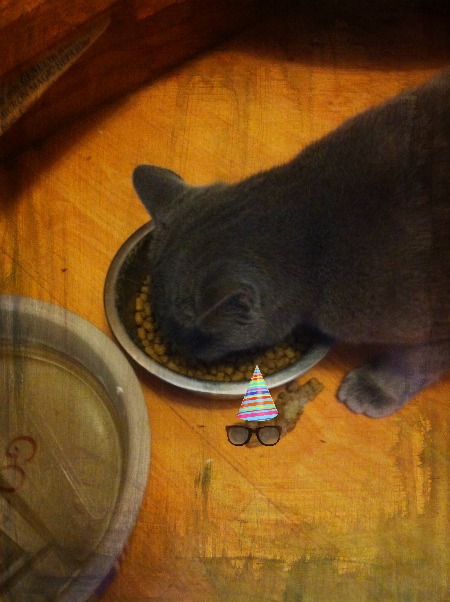 You’ll note that in this particular photograph, I decide that the cat barf could use a whimsical touch – like a birthday cap and Tom Cruise shades. I added, because one should never be afraid to mix mediums, a textured background. Why?