Most of the essays went out last night for signing up for Das Book. If you haven’t gotten yours, shoot an email to dave@copyontherocks.com and you can tell The Daver your woes (or offer him a marriage proposal. Whatever.). If you haven’t Pledged Your Allegiance to the Book, you should! FREE! ESSAY!

Somehow, I managed to score the nomination AND won the pick for the Hot Blogger Calendar, Pranksters. Now. I have no doubt that this will be pretty hilarious, because I’m hoping to be dressed like a gigantic Uncrustables for the shoot. Really, there’s nothing hotter than a chick dressed as a peanut butter sandwich, am I right?

Anyway, as I was looking for a different, yet equally humiliating picture to share with you, I came across another stash of ridiculous shots. I thought today would be a perfect day to share with you some more shameful pictures. Pretty sure you can’t take back your vote now.

I’ll even throw down a Mr. Linky for those of you who want to play along on your own blogs, because Your Aunt Becky is a giver of all kinds of wonderful things. Like headaches! And VD! But that is neither here nor there. 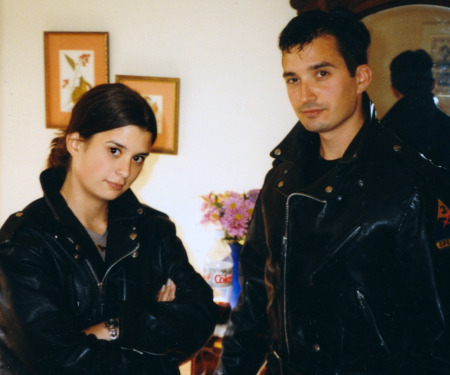 First, we’ll start here. This is my brother and I (you can call him Uncle Aunt Becky) when I was in college. While I know my hardcore-ness might be freaking you out THROUGH THE COMPUTER and causing you to perhaps pee in your pants, I assure you that I am safe around children.

And for the record, we were leaving to go on a motorcycle ride. 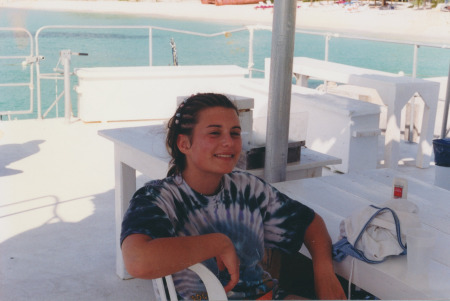 Fresh from listening to Mambo #5 for the 804,746 time in a row while short Mexican men poured gaily colored tequila down my throat from industrial sized plastic jugs, I stopped to take a breather. This picture was snapped before I had to go do the motherfucking Macarena AGAIN.

And while that appears to be a pair of Tighty-Whities next to me, I genuinely have no idea what the hell it is. Knowing me, it probably is. 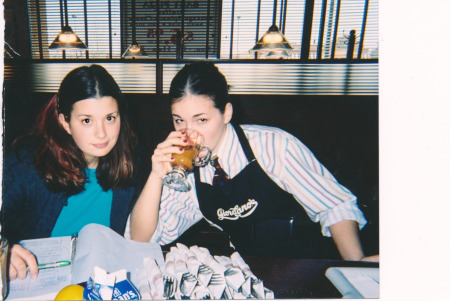 I liked this picture for 2 reasons.

a) it looked like I was either going to have sex with the camera or punch it (which is how I take most pictures)(watch out, BlogHer).

2)It shows off what a gigantic fucking nerd I am.

This is a shot of me in college taken from behind the bar where I worked. I don’t know if I was working or not, but clearly I was studying my balls off while drinking MILK. Lest anyone think I was exaggerating what an overachieving freak I was, there is the proof.

Also, if you look closely, my hair is highlighted pink! WHIMSICAL! 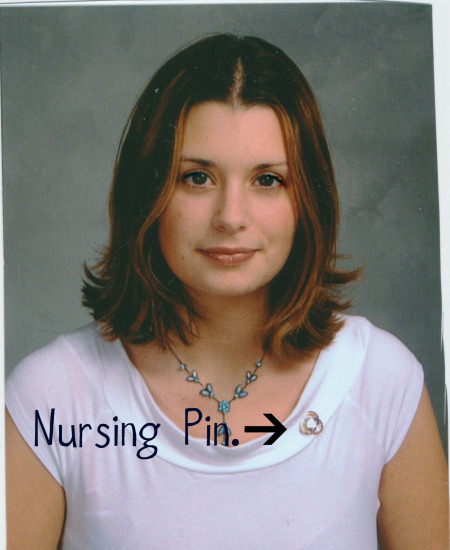 This is the best picture ever, and not just because you can clearly see my hot pink bra through the white shirt (what did I say about looking like I either want to have sex with the camera or beat the shit out of it?).

Except, I wasn’t all that excited, you see, so I was blowing off the whole thing. Really, I didn’t give a shit about it, so I showed up the day of the picture shoot looking like cat shit in a bag. I mean, who the hell was I gonna send my nursing school picture to? I don’t exactly have the sort of family that would happily display my picture on their wall.

My friends didn’t approve so they hijacked me, sat me down with some crusty old makeup they found lying around and made me take the picture. Wasn’t even my shirt, yo. And I was pissed because I couldn’t see a fucking thing because I didn’t have my glasses (or contacts) on.

So, I took the damn picture, paid roughly $500 for it, and still have the entire set of them in my room. I mean, really, who the hell wants a reminder that I was a nurse for like .005 seconds? I guess I could send them out as gag gifts to people or something. “Remember when I thought I was gonna be a nurse? PSYCH!!”

Now that I think about it, maybe it should be my Christmas Card pictures this year. It beats the one of the inside of my colon I was going to send.

Also, I don’t think that even based on these pictures, you can recant your vote for the hot blogger calendar. SORRY.

Alright, pranksters, for anyone who wants to play along with humiliating pictures on your OWN blog, here’s Mr. Linky:

75 thoughts on “You Might Want To Demand A Recount, Internet”