The monster that lived in my close was named Ernie. I knew this because my brother told me. Ernie liked raw meat and eggs and every night I had to feed him or he’d come down and eat me while I slept.

I’d have to yell, “Here Ernie, here’s an egg. Catch the egg, Ernie!” and then I’d run back into my bed and pull up the covers while I waited for Ernie to devour the egg, hoping that he didn’t decide that ickle girl would be a tastier option.

My father told me of my sister, the one who lived in the basement, chained to the wall, living on apple juice and rats. She’d been born, apparently, between us, and rather than let her live upstairs, she’d been too feral, too wild, and she had become a basement dweller.

My cousin would delight me with stories of the little girl who visited the lollipop factory, only to fall into a vat of the sticky syrup, and in a tragic accident, become a lollipop herself.

Less concerned with her fate, I was reassured that she was turned into my favorite flavor, cherry red. This satisfied me, of course. Because if you have to die in a lollipop factory, you should, at the very least, turn out to be sweetly delicious.

And then there are pictures like this. I’m in the bonnet.

You got a problem with my bonnet?

Because I clearly do. Even at 2.5, I seem to be looking at the camera in a “dude, I look ABSURD,” way, because, well, I do. I’m not sure what my mother was smoking to think that a nearly-three-year old needed to be doing walking around in a bonnet, but there you have it. Further proof that I was destined to write about my life on The Internet. 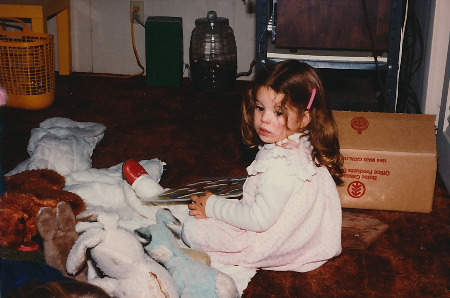 And here, surrounded by my bunnies, I am clearly afraid for my life. Why? Because I had to go to bed soon, where ERNIE could, at any time, come and eat me.

My army of bunnies couldn’t save me from the monster in my closet. 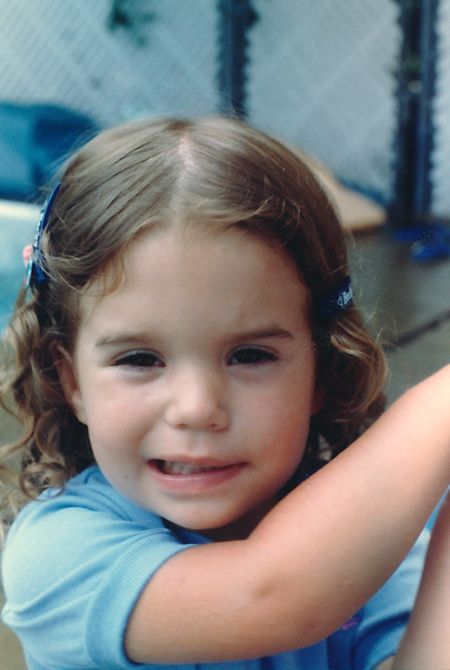 Perhaps I was practicing to be a pirate. Because, wouldn’t you if you had a monster in your motherfucking closet? 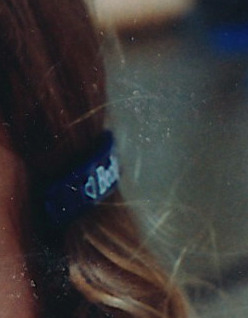 The best part of this picture is my “BECKY” barrette. Because I would STILL TOTALLY WEAR THAT SHIT.

This is my father. And my brother. No, I am not kidding. That’s Santa and his Elf, Ralph.

So, no, I don’t EVER wonder why I’m like this. In fact, I often wonder how I got to be so damn normal*.