Howdy, Pranksters. Today, I’m doing something I haven’t done in far too long: I have a guest poster.

Pranksters, meet my VP from Band Back Together and one of my very bestest friends, Jana, from Jana’s Thinking Place.

When Becky asked me to write a guest post for her site, I’ll admit, even after working with her on Band Back Together for over a year now, I got a wee bit nervous. I mean, I have to be funny and all, and quite frankly I’ve been having a bad week and don’t feel very funny. My antics over on my own site are typically laser-kitty-free and without lots of glitter and shit, but I do have a trick up my sleeve. 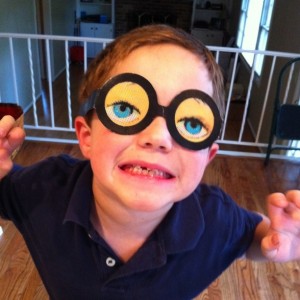 Have you met my kid Henry? He’s awesome. He’s almost 7 and thinks he’s 17. He loves iCarly and Seinfeld along with the normal little boy favorites like Star Wars and Phineas and Ferb.

He also ahem likes to cuss. I may or may not be to blame for this. I try to be good, I really do, but I kinda have a potty mouth. The occasional shit, damn or hell flies on a semi-daily basis while I try to contain my f-bombs to when little ears are asleep.

Anyway, we watch The Middle together. He thinks it’s hilarious and we do, too. This and iCarly are the only shows we all three agree on. The other night we were watching The Middle and the following conversation transpired:

Henry: Oh, I love this show. He’s my favorite character.

Jason: {balding head explodes} Who? Who do you mean? ASSHOLE?

Henry: {pointing to the TV at the older brother}

Henry: {the biggest, most disgusted sigh EVER} oh, shit, I thought his name was Asshole.

So for the next thirty minutes, every time Axl was on the TV, the word Asshole was muttered laughingly by my kid.

I’ve gotta say though, he’s got the whole cussing thing down pat. He knows when and how to use cuss words properly. He can throw around dammit and shit as well as the next potty mouth soccer mom’s kid. But we are fortunate that he DOES have a filter and knows when he can and can’t use the words.

Well, now that I say that, I’ve probably jinxed it. He’ll come home from school tomorrow with a note saying he called some kid an asshole.

Who’ll be the asshole then?