The last straw was when Angie’s whole family called me a Mennonite. I think those are the people who don’t use zippers, but I don’t know because I’m not smart and I’m too lazy to Google it, but basically, her family was shocked that I didn’t have a DVR.

I do have zippers, however, although, my whore pants are nowhere to be found. I’m pretty sure I should make a MISSING PANTS poster for them if I ever want to see them again. They’re probably on their way to Vegas now. Whore pants. 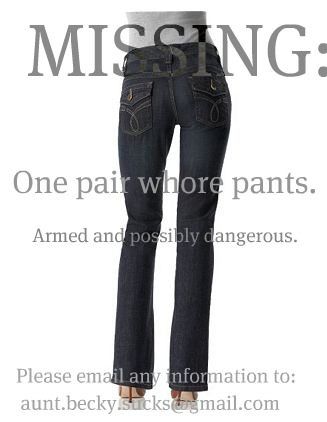 Oddly, after I got back from my cruise, The Daver had gotten us a DVR, BEFORE I railed on him about being a Mennonite (whatever that is), and immediately, I asked him to record every episode of Law and Order: Your Life Doesn’t Suck As Bad As You Think It Does that was ever made.

Since you can find that show on TV just about any hour of the day, thanks to Dick Wolf’s tireless dedication to taking over the airwaves (TV waves?), that means that my very own DVR is always filled with Law and Order: This Is Depressing Shit.

And because I am a compulsive personality (see also: my blog, my orchids, my roses), this is what I watch every night.

Sure, back when my beloved television husband Dr. House was on air, I would watch his show, eyes glued to him for the entire hour. Likewise with Dexter, my serial killer husband.

But summer programming pretty much sucks the fat one and so I am stuck with Law and Order: How Dare You Feel Bad About Your Life? But I like the shows and the puzzles and the characters, especially Ice-T (did you know he’s on Twitter? He’s one of two celebrities I follow and I adore him).

I’m starting to wonder if watching shows about rape, murder and suicide are the best thing for me to watch before bed.

See, I have insomnia. Now, I’m not talking about the once-in-awhile “I can’t sleep!! LOL!!” insomnia, I’m talking about the real shit. It’s not anxiety, but it is the absolute inability to sleep like a normal fucking person and it sucks.

Some nights, I’ll lay in bed, polishing my imaginary glock while I imagine killing the person who wrote the “Do-do-do a dollop of Daisy” commercial. Or the “Turn the Tub Around” one. Others, I write blog posts. Still others, I just lay there, half asleep and half awake, drifting in and out.

Not all nights are like this, but for the past 20 or so, I’ve gotten one good night of sleep.

Normally, I take Unisom and sometimes it works. Sometimes it doesn’t. I’ve tried Lunesta and actually got addicted to that stuff. When I went off of it, I actually went through withdrawals, which sounds insane, but I swear, it happened. And everything you read on The Internet is true, obviously.

The worst part about the past 20ish nights is the NIGHTMARES.

Pranksters, they’re AWFUL. Every night, all night, nothing but nightmares. I won’t launch into what they were about because reading about dream sequences is about as interesting as toast or beige paint, but suffice to say, it’s been almost unbearable to go to sleep because I don’t know what my subconscious will dredge up to torture me with.

I don’t know if this is part of recovery or a side effect of trying to cut down on my Topamax (which was an abysmal failure, I should add, even though my neurologist, the one with GERD, suggested I try it) or just part of bringing up all of my past again, but maybe I could just, you know, go through the rest of this UNCONSCIOUS or something. You guys probably know better than I do.

Then again, maybe I just need to stop watching gruesome shit before bed.

I should probably just look at pictures of adorable, fluffy kittens and big-eyed puppies, right?

And if you want to vote for my blog (funniest blog)(which, huh?), you may vote once per day here.

85 thoughts on “While I DO Use Zippers, I Don’t Know If It Will Ward Off Rampant Zombie Attacks”