I’m getting a new central air conditioner today. It’s been dying a slow and painful death since Alex was a wee babe and we’ve put it off because, well, it hadn’t entirely bit the bucket. The guy came to install it and was all, “Holy shit, I can’t believe they hooked it up like this. It could have blown up.” 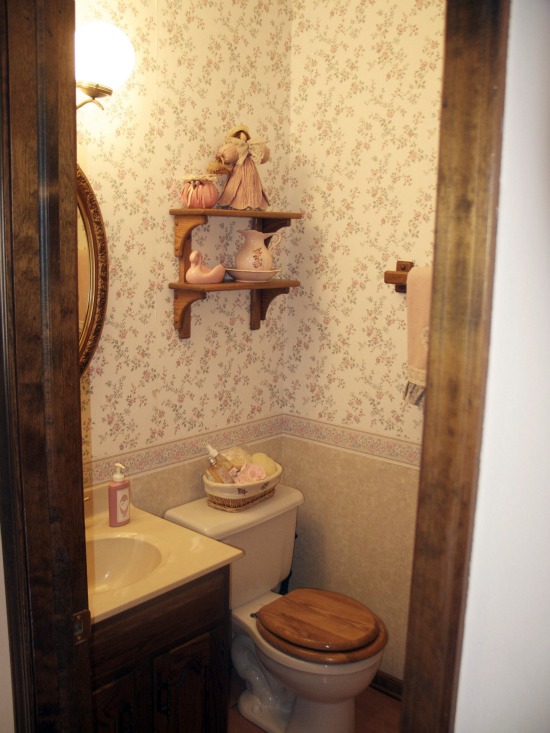 (yes, yes that’s right, Pranksters. That IS three types of wallpaper in that tiny room. And, why yes! How astute of you to notice that it’s GLUED TO THE FUCKING DRYWALL. GOD, that was a bitch to get off.)

Anyway. I couldn’t be happier to have this installed, even though it’s costing me a couple of G’s.

As I told The Daver this morning, “Hey, it beats the condo.” He laughed knowingly.

Our condo was a charming thing, all tall ceilings and dark wood floors. Very beautiful.

Until we moved in.

It was only then when I realized what “vintage” really meant. It meant, “you’re a fucking sucker.”

We had a radiator in the basement, one that heated all of the units, and, well, it was on when it was on and when it wasn’t on, it was still on. Our condo was right below it, so during the winter, it wasn’t uncommon to see me walking around in a tank top and shorts.

We’d gone to a Condo Board Meeting to learn that our poor radiator was on it’s last legs…and there were no funds from our condo dues to pay for it. It cost something like ten billion dollars.

We’d just shelled out five grand for a new back porch.

And the lead-paint covered windows that may as well have been screens for all the air they kept out? Well, if we wanted to replace those, they were a thousand dollars.

We had something like ten windows. Ten grand (plus installation!) for windows. Windows NOT made of solid gold.

See, we needed to get specialty windows – replicas of the original – to match building code.

When we added fans (and learned about the faulty wiring that may have killed us in a fiery blaze, had we not gone up and fixed it) in our condo in the summer because it was 8000000 degrees and window AC units don’t work so well when the windows allow hot air to pour in? Well, we were in trouble with the condo board for not using their electrician.

I have never been happier to move back to the land of the pre-fab.

At least now, when our AC unit craps out on us, I can buy a FLOOR MODEL and have it installed. It’s not specially carved by small children in Zimbabwe to match my house. It’s just an AC unit.

And when I decide to recarpet my house, it will be regular carpet, not carpet hand-crafted on the backs of seventeen vestal virgins.

Which is fortunate. I don’t even know what a vestal virgin is.