My older brother, Uncle Aunt Becky, who is ten years my senior, is still angry with my mother for dressing him in striped shirts for most of his childhood. Knowing my mother, she probably did try to stuff him into those hated striped shirts until he was well into college, so maybe he does have a point.

My mother gave me The Bangs that started at approximately the crown of my head and ended in a straight line at my eyebrows. The Bangs used most of my hair. The Bangs are the reason I shuddered when I saw that bangs came back into fashion a couple of years ago.

I cannot see bangs as anything other than The Bangs and I’m constantly terrified that a wandering pair of scissors is going to accidentally cut my hair into The Bangs again.

Uncle Aunt Becky, I don’t share your hatred of stripey shirts, but I totally get it.

Alex has made it abundantly clear that he’s all Sherrick (my middle/maiden name) and with the exception of the albino-translucent-don’t-let-him-in-the-sun-lest-he-set-on-fire-like-parchment he’s no “Harks” whatsoever.

Being a “Sherrick” means that there is only one way that things are done and that is the right way and if things do not go that way, you will simply poke-poke-prod-poke until they are done that way again. The PROPER way. If we eat ham on Easter, we’ll eat motherfucking ham every Easter until we have motherfucking PORK poisoning and it doesn’t matter if you hate ham, or if EVERYONE hates ham because we eat motherfucking HAM on motherfucking EASTER goddammit so you better get used to it!

I am *ahem* slightly less rigid than this (shut your whore mouth, Pranksters) but I certainly have quite a bit of Sherrick in me, too.

Alex, however is a miniature version of my brother, Uncle Aunt Becky, minus the vampiric skin, of course. Uncle Aunt Becky is swarthy like Your Aunt Becky. I attributed a lot of his Sherrick-ness to being a toddler until I realized that actually, you can’t breed that shit out. Like the poo jokes he makes. Alex is 100% Sherrick.

(Man, I know I’m just making you all want to come to my house for Christmas. “NOW, it’s time for YOU to tell a fart joke, Uncle Aunt Becky! YES YOU!”)

Last night, I was ordering some cheap-ass clothes from the Old Navy website. I’m generally not a fan of disposable clothes, but I’m still losing the baby weight (thank you, my children for helping me pile on a fuck-ton of weight while barfing my brains out), and Old Navy is perfect for these sorts of things. Plus, I had a coupon, and buying things with coupons makes me happy in the pants.

So I was adding some fall clothes for me and I figured I’d be nice and grab The Daver some t-shirts while I was at it.

While I was looking at their men’s clothes, I saw that striped shirts for men were back in vogue.

Aunt Becky: “Although, he’s got to get a lot of soccer mom ass.”

The Daver: “Maybe if I wore them, I’d get a lot of soccer mom ass.”

Alex: “I want a striped shirt.”

Alex: “Will you get me a striped shirt?”

Alex: “Yes, please. May I please have a striped shirt?”

(he thought I was asking him to ask politely)

Aunt Becky: “Ooookay, baby. I’ll get you a striped shirt.”

Aunt Becky: “Uh, you were serious?”

Alex: “I would like a striped shirt from the store.”

Now, if Amelia wants bangs, I may have to have stage an Intervention. 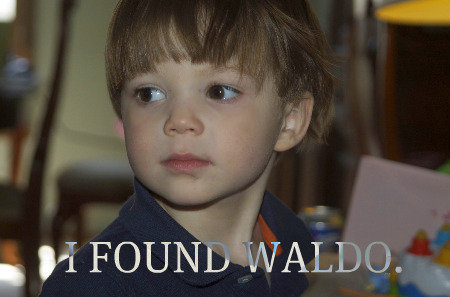 Poke-poke-poke-prod-poke. CHARITY POSTS. I rewrote the intro for the Fans of The David Cook who have been finding their way here, confused and alone.

59 thoughts on “When I Find Waldo, Imma Beat Him With His Jaunty Cane”