Before I get into my post “When Fireworks Attack,” I simply wanted you to know how grateful I am for you.

The love, kindness and advice you’ve given me has been what’s keeping me going. I know that being surrounded by items that were given out of love will help remind me that I am not alone, even when I am at my worst.

If you’re interested in helping or offering me advice, I’d more than welcome your help and advice.

I’ve been asked to create an Amazon Wish List for things I’m going to need in the future as the Internet is throwing me a house-warming party (which blows my mind). The only problem is that I have NO IDEA what to ask for.

I’ve also been offered any awesome stuff you have hanging around which I plan to write your name on as a reminder of the people who DO love me. Hokey? YES. But I don’t care.

Anyway, that being here nor there, I wanted you to know that I’ve been patiently going through your comments and have created a massive Google spreadsheet with all of your advice – I will be returning all comments and emails because, well, I love you dearly, and your support has overwhelmed in in the very best of ways.

Anyone going through a similar situation should be reading the comments on this post – the advice is incredible.

I recall how deeply offended I was when Illinois banned sparklers, thereby banning fun, which I wrote about angrily a couple of summers ago. Because banning sparklers is bullshit.

Or so I maintained…

On our way down to NashTucky, we’d been powering on through as we drove, determined to get to the Gaylord Hotel – where we were staying – in time so that we could get a balcony that opened into the atrium of the hotel. It just seemed like a good damn idea and really, I wanted a damn cheeseburger WITHOUT a side of E. Coli, which is what I’d assumed I’d get if we stopped off to eat. Now that I think of it, spending my birthday weekend partying with E.Coli could’ve been pretty full of the awesome. Although, to be fair, not as awesome a time as the dude we met walking into the hotel who was carrying two boxes of shitty cheap beer to take to his room.

HE knows how to party.

Our eyeballs floating in urine, we finally agreed that a piss break was necessary – I didn’t particularly want to check into the hotel reeking of urine and, well, I’m pretty sure Dawn would’ve dismembered my body and left it in her front seat as a reminder to anyone who dared think of peeing in her car again.

We pulled off the highway and noted that the area we’d walked into was fairly…shady (and I am being generous). Let’s leave it at: I was simply glad it was daytime.

When we saw the fireworks store attached to the gas station, Dawn and I both reached higher and higher heights of orgasmic potential because we’re both accustomed to Illinois banning fun (and impeaching our corrupt governors). It was so cornball, so cheesy, so hilarious that we laughed our way into the gas station, which, based on the dour expression of the dude behind the counter, was not appropriate behavior for those who enter HIS store. We made a beeline for the bathroom, and I graciously allowed Dawn to go first.

“Just don’t stink it up with shit,” I warned, “Or I may have to poop in your pillow tonight.”

She laughed, grabbing her bladder and yelling, “DON’T MAKE ME LAUGH, SLORE!”

I took the opportunity to mosey around the fireworks section of the store, seeing if I could find the one thing I remembered loving during my childhood: sparklers. Money was tight, which meant I wasn’t about to be buying my children (who want for NOTHING) lavish gifts. Sparklers it was. I gleefully handed them to Dawn, after she took what appeared to be six hours peeing in the dingy bathroom, pointing her at the large selection of pork skin related products on display.

“Dude, it’s a Southern thing,” she whispered back, like that was supposed explain anything.

I took a befuddled pee while wondering what “It’s a Southern thing” meant, exactly, before returning to retrieve my beloved sparklers and pay for them and get the fuck out of what was now a decidedly creepy-ass place. The more we stayed, the higher my hackles rose.

I walked up to the front counter with my requisite diet Coke and the package of sparklers, marveling at how, in a mere seven hours, I’d managed to get ALL my kids something I just KNEW they’d love. Sure, they might like the explodey-rockets better, but I was no dummy – I get broken toes from making sandwiches, what could those scary fireworks do to me?

I didn’t intend to find out.

The man behind the counter simply glowered at me as he rung up my items, not, for one moment, taking his eyes off of me, even as I noted things like the large collection of “tobacco” pipes prominently displayed at the front register. I figured that as my kids aren’t allowed to consider smoking until they’re AT LEAST 12, I’d made a stellar decision with the sparklers. I mean, sparklers, WHAT’S NOT TO LOVE?

His eyes never left me, even after he was done ringing me up. I could GUESS what I owed, but wasn’t sure, so I looked around to see if there was some sort of price total thing I wasn’t noticing, and therefore, should be pulling out my wallet and handing over ten bucks.

He rattled off some number and I handed him a ten-spot.

Soon, Dawn and I were back in the car.

“Let’s get the fuck outta here,” she all but screamed.

“Wait, dude, I need to snap a picture before the fucking zombies come and eat us,” I pleaded. 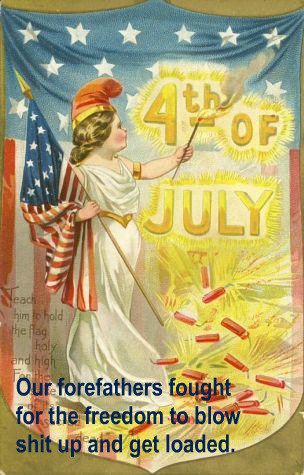 Ha! GOTCHA – that’s NOT the picture of the store (but that’d be rad) 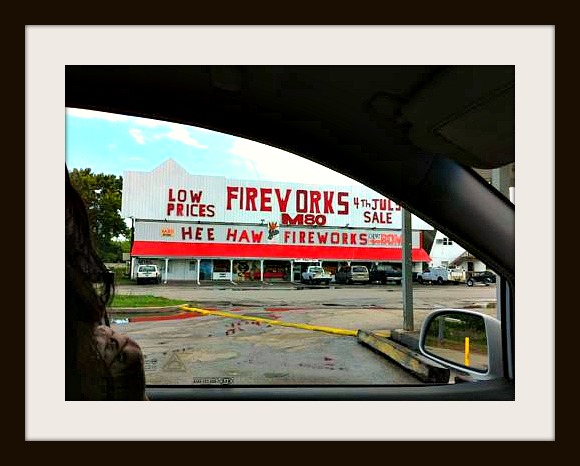 That totally is. And with a storefront like that, how can you go wrong?

“Do I bring this shit inside?” gesturing to my fireworks, I asked Dawn as we parked the car at the hotel.

“Do fireworks explode in the heat?” she countered.

“I don’t fucking know,” I replied.

“Better to be safe than sorry,” she said smugly.

“I hope your mouth hurt a little from saying that,” I said, as I grabbed my bag which weighed approximately 73,625 pounds.

I considered putting them in the room safe just because, but decided I’d probably forget them and then I’d get the hotel all bomb squad on my ass.

I got home late on July 15, my birthday, to find that my (now crabby) kids were waiting up for me. It was a shining moment in a fairly depressing day. My three kids swarmed me, begging for hugs, love, and other types of birthday wishes, as they sang an off-key version of “Happy Birthday.” I melted inside.

That sweetness was, of course, followed up by “What’d you bring us?” which I’d expected. Frankly, I’m shocked they hadn’t started with that. Kids, man, I tell you.

I grabbed the box of sparklers from my bag and said, “SPARKLERS!”

My kids were decidedly nonplussed until I said, “they’re fireworks, kiddos.” That seemed to assuage the hurt of not being brought a) Batman or 2) Large amounts of candy. “Can we do dem now?” Mimi was the first to ask, already getting her shoes on heading for the back door.

“No, babies. Mama’s tired. Maybe we can do them another day – like Saturday!”

They grumbled and moaned about it, stomping up to bed, clearly having forgotten it was my birthday and, therefore, a day to be “nice to Mama.” I just laughed. Kids, man. They know how to knock your ass the fuck down.

By the following weekend, I decided that it was high time we get our sparkler on (kinda like getting your sexy on, but better). I grabbed the two Littles (the big one was at his grandmother’s house in Wisconsin) and headed out back with Dave, ready to dazzle and delight them. I don’t know who was more excited – the kids or the adults.

I’d grabbed a lighter and the box of fireworks – three! whopping! colors! and sat down on the back patio under the spiffy umbrella I’d saved up to buy for five years. The kids danced around me, and I decided that rather than wait for Dave, I’d get a sparkler started on my own. I mean, I was being fucking BRAVE and shit, now, right? And for fuck’s sake, they were sparklers not some of those weird rocket things. 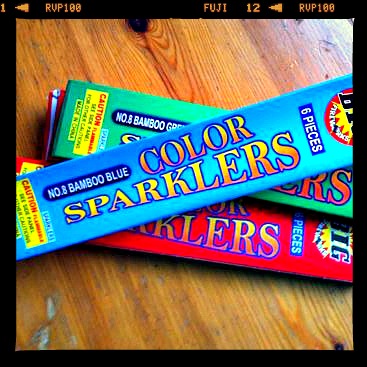 I snapped the lighter so the flame grew as I hovered the sparkler over it.

That seems to be taking a HELL of a long time to light. Perhaps I simply didn’t remember that sparklers took 800 years to light. Seemed about my speed, considering I can never find my pants.

I kept holding the lighter over the sparkler, which looked a lot more chode-like than I’d recalled, but childhood memories being what they are, what can you expect.

After a couple more seconds, and the addition of Dave onto the patio, BAM, it lit.

Boy, did it light. It lit so fucking well that this happened: 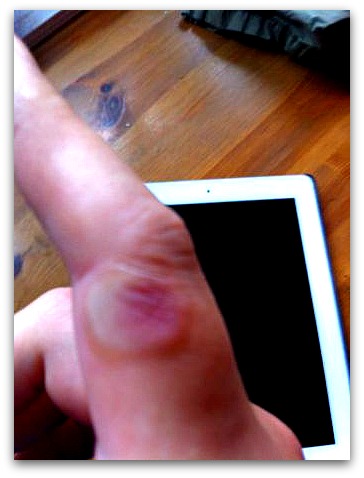 Let my busted finger be a lesson to you, Pranksters: fireworks = bad. Especially if Aunt Becky is involved.

15 thoughts on “Next On Fox News At Nine: When Fireworks Attack”