It might shock you, Pranksters, that Your Aunt Becky is a weeeee bit compulsive.

Okay, stop nodding so hard – it’s giving me a headache.

So I’m compulsive. One look at my orchid farm will tell you that much. 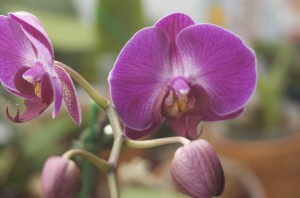 Had I had three remaining brain cells, I’d have grimly come up with SOMETHING. Because OMGWTFBBQ it’s my BLAWG and peoples READ MAH BLAWG.

Last year, right around this time, I was all OMGWTFBBQ GLEE IS AWESOME. I DON’T CARE IF THE GIRL EVERYONE SAYS IS LIKE ME, HAS A MOUTH THAT THREATENS ME WHILE I WATCH. IT’S SO FUNNY AND AWESOME AND OMGWTFBBQ.

But Glee, sadly, was on hiatus for some American Idol crap or something. And I was recovering from surgery which meant I wasn’t supposed to be sitting up. I had a LOT of hours to fill. Vertically.

So I’m all, YOU KNOW WHAT’S GOTTA BE AS AWESOME AS GLEE? THE OTHER SHOW THE GLEE CREATOR MADE: NIP/TUCK.

Netflix and I had a love affair, see, and I TRUSTED Netflix not to do me wrong.

Happily, I noted that I had six (SIX!) entire seasons of the show to watch. I’d have done a happy dance if I’d be able, but I settled on a lone *fistbump* and queued up the first episode.

Okay, I said, so there’s this really nice doctor guy and he’s got this perfect wife and two kids – the boy looked like Michael Jackson – and then there’s this cocky playboy doctor and puts his peen in lots of things. Instantly, I was horrified. Crazy-balls Anne Hesche was in it. Until I learned that it wasn’t actually Crazy-Balls Anne Hesche and felt bad for hating the pretty blonde NON-ANNE-HESCHE lady.

But whatever. The kid looked like Michael Jackson and the two doctors were semi-likeable.

By episode two, I found myself bored.

By episode three, I’d begun to hate each and every character – including the hamster.

Any normal person would have then stopped the show, shrugged, and written it off as a crap-ass show. But not Your Aunt Becky.

No, I grimly sat through each show, all of the ridiculous scenarios, and hoped for a better episode. The next one HAD to be better, right?

Turns out, not so much.

My favorite moment of the entire show was when someone got hit by a bus. It was great.

The rest of it? I hated each and every character. Equally. At no point did I say, “wow, that was great. I really connected with that character.”

(to be fair, I’ve never said something so hokey in my life, unless I was stoned and/or drunk)

So this week, when The Guy On The Couch, The Daver and I ran out of Pawn Stars episodes on Netflix, we searched desperately to find something to fill the void. Anything.

“Me too,” The Guy on the Couch chimed in.

We settled down to watch the first episode.

Instantly, I hated everyone on the screen – these are the fuckheads who give me tickets and they’re talking about how they think they’re doing some great job for the world? HOW IS CHARGING ME TWENTY BUCKS ALTRUISTIC?

By the time some lady began weeping over her car, calling it “her BABY,” I had to turn it off. I mean, who can feel a connection with the douchebags that give me parking tickets for being ONE MINUTE PAST MY METER TIME? Like, aw, thanks Buddy, for making MY world a WORSE place to be. Way to RID the world of those of us who FORGET TO PAY OUR METERS. YOU’RE TOTALLY SUPER-FUCKING-MAN, BUDDY!

It’s like trying to be sympathetic to the chick who has brought in 8 different guys for five different Maury shows. WHO HAS SEX WITH THAT MANY PEOPLE IN A MONTH?

Wait, so long as the DMV people were antagonists, I might be okay.

I am pleased to report to you, Pranksters, that I DID, in fact, learn my lesson. Rather than muddle through the entire catalog of Parking Wars, I deleted it from my “you might like this” queue.

BECAUSE YOU KNOW WHAT, NETFLIX, I DON’T LIKE IT.

Hoarders, however, well, let’s just say I miss seeing people poo into bags AND SAVE IT.