I get a handful of those address labels throughout the year. Not ones that I order or anything, but the ones that various charities send to me to elicit me to send them cash. (if I ordered them, they’d probably have anatomical parts or the three wolf moon on them or something)

They’re usually corny things, ladybugs and smiling faces and shit. So normally, I toss them into the recycling bin, knowing I don’t exactly want to say that my name is “Mrs. David Harks” or anything. Because believe it or not, when I got married, I KEPT A NAME OF MY OWN.

Anyway. Not a huge fan of those charitable stickers.

Don’t get me wrong – I donate to a couple of charities religiously: Now I Lay Me Down To Sleep and March of Dimes (soon enough Band Back Together!), but I don’t have the fundage to donate to every stinking thing that wants my cash.

That’s why, when the Sarah McLaughlin “Angel” song pipes up on one of those ASPCA commercials, I have to turn the channel before I start throwing wads of cash at the television screen. I mean, could they GET any more tear-jerking? I think not.

(dramatic foreshadowing) Rather, I THOUGHT not.

So quickly, I change the channel and pretend that I’m not weeping into my Diet Coke. Because Lord knows, I cannot afford to pay off yet ANOTHER person to prevent them from telling the world that I do, in fact, have feelings.

But last night, I saw that I got yet ANOTHER set of address labels. Addressed to me: Ms. Becky S. Harks. Finally, my ACTUAL name. I could USE those for the Christmas Cards I’ll forget to send!

“No,” Ben and Daver both chimed as I opened it. “YOU DON’T NEED TO SEND THEM MONIES.”

My resolve strong, I was all, “I’m too GOOD for charitable tactics. I can TOTALLY use these stickers WITHOUT forking over wads of cash. I CAN FUCKING DO IT. EYE OF THE MOTHERFUCKING TIGER!”

And then I saw it. The letter. 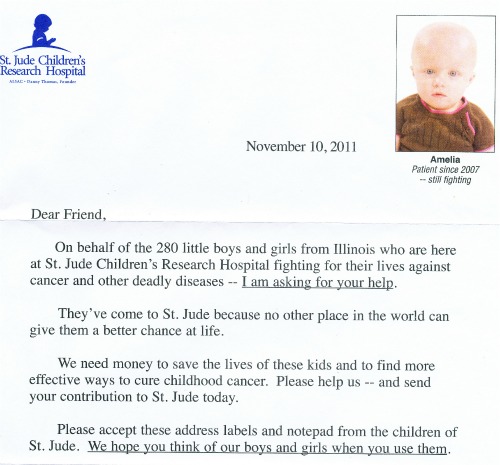 You got my formerly sick kid’s NAME on top of your letterhead. Nice job. Now I HAVE to give you money.

Jesus, could you stick the knife in any deeper?

“Guys,” I said, tears pouring, “I have to send them mah monies.”

“LOOK.” I thrust the paper into Ben’s hand. Immediately, his face crumpled, his eyes just a little moist (he clearly never paid me off to tell the world he doesn’t have feelers).

Then I handed it to Daver, whose face did a similar crumple.

It looks like you’ve won this round, St. Judes.

Jimmy Motherfucking Wales? You can blow me. Hard. In fact, I sorta wanna to pull a John C. Mayer on you now. WATCH OUT JIMMY FUCKING WALES. I’M ON TO YOU.