There are a few occasions when I take time from my very busy schedule of creating pictures of my fake dead cat, Mr. Sprinkles, doing wacky things to respond to emails. Because, really, is there anything better than this? 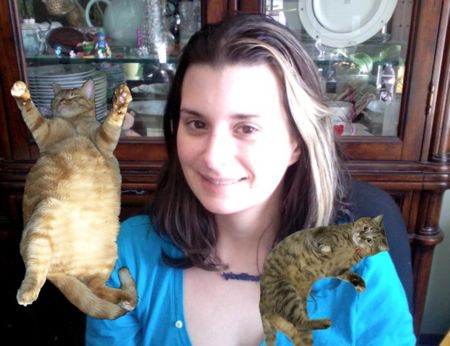 But on very, VERY rare occasion, I get an email that makes me stop and go, “You know what? Maybe I should stop working on pictures of myself with my fake dead cat Mr. Sprinkles and do something better with my time,” (the feeling never does last)

A year ago today, I got one of those emails.

My now-friend Nikki sent me an email about her 20-week old fetus, who had just been diagnosed prenatally with an encephalocele. Somehow, she’d managed to look past the grisly stories out there about other children with encephaloceles (the fatality rate for encephaloceles is exceptionally high) and had found her way to my mediocre blog.

More specifically, she’d found Amelia’s Grace, the stories about my daughter who, too, had been born with an encephalocele.

Amelia was born with the kind of encephalocele associated with the least favorable outcomes. A posterior encephalocele filled with brain matter. I’d had a standard vaginal delivery. There was no NICU team waiting for her. In fact, no one was waiting for her but a nurse, the doctor and a tech.

In short, everything about the situation surrounding Amelia’s story was bad.

When I wrote Amelia’s Grace, the story of my daughter, I’d never really thought that someone else might find my drivel while searching for something to cling to. Some hope in an otherwise grim situation. Because the statistics, those cold hard numbers about encephaloceles; those are grim:

An encephalocele reduces the likelihood of a live birth to 21%.

Only half of those 21% survive.

75% of those survivors have varying degrees of mental retardation, the severity of defects higher for those who have the brain herniation on the back of the skull.

She, however, she is not grim. She laughs in the face of statistics. She will tell that encephalocele to shut it’s whore mouth.

Amelia will also give her voice to those who have none.

Nikki has been a good friend of mine for a year now and she’s helped me as much as I’ve helped her. Proof that sometimes people come into your life at exactly the right time. I owe her a debt that I don’t think she understands.

Now, I will simply direct you to Lily’s Story, which I have strong-armed Nikki into writing for Band Back Together.

Today is the day that it turned upside down for Nikki and my sweet girl, Lily Grace.

What a difference one year makes.

37 thoughts on “Wednesday’s Child is Full of Grace”