Decorating the Christmas tree while listening to Britney Spears croon, “My Only Wish?” Totally awesome.

One of my favorite traditions – besides drinking gallons of coffee and diet Coke – is to make something so ridiculous, so heinous, and so morally reprehensible as to embarrass as many people as possible. Namely my uber-conservative in-laws.

That’s right, Pranksters, I took a bit from a Saturday Night Live Skit and made my own.

What, I can hear you ask, could you possibly have taken? The weird cheerleader bit? The Church Lady? The Ambiguously Gay Duo?

I know I’ve spoken of it before, but when I was a child, my parents listened almost exclusively to NPR and the local classical radio station. Don’t get me wrong, hearing about how 3000 children in Afghanistan by some horrible disease is pretty much UN-scarring for a kid (also: positive and uplifting), but I spent most of those years, stuck in the living room listening to the announcers drone on and on, praying, hoping, praying that one of them would slip up and swear.

So when SNL put together a skit about Alec Baldwin’s Schweddy Balls, it was like a childhood dream come true. FINALLY, those announcers were talking about dirty shit WITHOUT skipping a beat!

Here’s the video for those of you who live in a cave and haven’t seen it.

I’ll wait here while you compose yourself; perhaps get a new chair or keyboard.

So I decided when Alex was a wee babe that what I needed to do was to make Schweddy Balls and put them out for Christmas. If I could successfully dead-pan the delivery of Schweddy Balls to my family, I would win.

(what would I win? Maybe a Mr. Peanut medal or something)

Each year, I’ve diligently made something with a dirty name (Meat Sticks, anyone?), and my own family has laughed uproariously, whereas my in-laws don’t even blink when I say, “Here, try my Schweddy Balls.” Perhaps it’s lost on them.

Either way, it may be September, but I’m already pondering what to make this year for “Schweddy Balls.” I’m thinking Rum Balls, but you know, it’s a Schweddy family recipe, so we’ll see.

Then, this morning, my sister-in-law sent me something on The Facebook. I’m not sure whether to be thrilled or furious at Ben and Jerry’s. 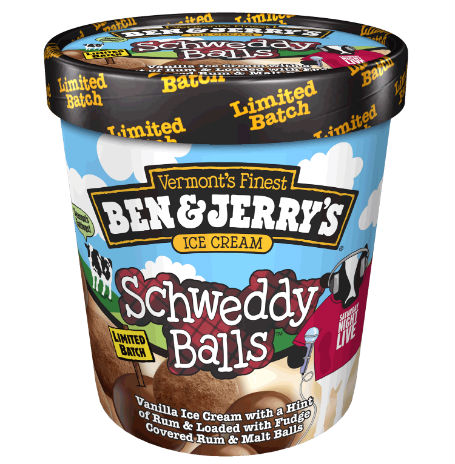 18 thoughts on “Way To Ruin Christmas”