Way back before we became full of The Sickness, Round Elventy-ninerish (I too am now full of The Sick) I caught what was likely The Dreaded Swine Flu of Ought Niner. I say that not because I was running around the house screaming “BRING OUT YOUR SWINE” and clanging a cowbell because honestly, I was too sick to even moan, let alone come close to anything resembling running.

Well, I was pretty fucking pissed at the pig who gave me The Swine and I decided in a feverish haze that I was going to sue the shit out of the pig on The People’s Court. Of course I told The Internet all about this, because obviously. I was very, very sick. Also, I was very, very stoned on cough syrup.

(did you know that they card you for cough syrup? THEY TOTALLY DO)

Well, Your Aunt Becky has a Best Friend who gave her a hand while she was sick (because she is full of The Awesome and you should hump her leg too).

And guess who won her case!! 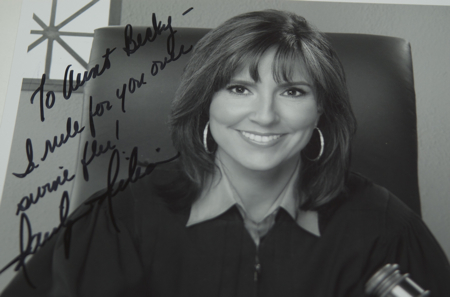 Oh yes. The judge ruled FOR ME OVER SWINE FLU. I WON MY CASE ON THE PEOPLE’S COURT.*

I AM A CELEBRITY NOW BECAUSE I WAS ALMOST ON THE PEOPLE’S COURT! TAKE THAT SWINE FLU!

The cat eyeballed me warily and then goes back to sleep after licking her butt, the dog looked annoyed for a second before realizing that I wasn’t going to give him a treat and then resumed his life as a houseplant. The baby and the toddler napped on, oblivious to their ridiculous mother.

Next up, I am TOTALLY giving that pig a paternity test on Maury.

While I wasn’t here, I was off doing other things (I am setting up a professional website like a BIG GIRL too!). It’s making me look way more prolific than I actually am.

First, I went to Divine Caroline and wrote about how I am an old fart this year for Christmas and what’s worse than anything is that it means that I’m turning into my parents. Since it’s the first thing I wrote there, the site is begging you to comment for some reason. Maybe it thinks I’m insecure or something. *shrugs*

Then I traveled up north to Canada to tell the story of when I was Satan’s Little Helper. I cannot believe I never blogged this before. Talk about previously repressed memories.

And lastly, it’s Beaver Talk With Aunt Becky at Toy With Me, where I’m talking about Girl Crushes. Besides my standard foul mouth, I think this is shockingly safe for work.

*Isn’t that the coolest thing you’ve ever seen in your WHOLE LIFE? It’s a REAL signed picture! She didn’t fake it or anything! I have been laughing my ass off ALL DAY LONG. That’s getting framed and going on my wall.