Two years ago, in a galaxy far, far away, I’d just had major abdominal surgery.

No, no, I say, sitting back in my chair and slurping my coffee loudly. Nothing so dramatical.

I’d gone under the knife two years ago (right before a trip to Vegas!) to have a full abdominoplasty.

Yes and no, I reply, still slurping my coffee.

You see, I’m built with the approximate proportions of a daddy long-legs spider — all legs with practically no torso. That means that I’m freakish looking on a good day and while pregnant with my kids, that I carry them RIGHT out there — as in, my pregnant torso entered rooms a full five minutes before the rest of me waddled in. (I also appear to carry them in my ass, but that’s neither here nor there). The spider-like pregnancies left my abdominal muscles both screaming and groaning, the muscles actually weeping whenever I dared to do such things as “sit up.” Laying down, I could nearly sink my fist through the hole left in my abs and grab out my entrails, should I have been so inclined.

Let’s not even mention that three babies at 8 pounds a piece + 60 pounds of baby weight = loose skin I could probably have worn as a nice skin scarf, should I have chosen.

And I was born, not only with the bladder of a squirrel, but with something my mother affectionately refers to as The Sherrick Pot-Belly, which meant that even if I went the anorexic route, I’d still look 3 months pregnant.

I’d originally gone into the plastic surgeons to see about a boob job — these puppies are huge and with migraines and neck issues, I figured a reduction might be the ticket to a pain-free life (hey, after it’s been suggested that you inject botulism toxin into your fucking neck, the idea of a boob reduction seems almost… fun).

He took one look at my melons and informed me that insurance would scoff at my claim. Plus, he said, I’d probably end up looking freakish, unless I got a complete boob job. Which was something like 9+ hours on the OR table.

But he looked down and noted my gut and had me lay back. He sucked his breath in as he noted the gaping space between the abdominal muscles formerly known as mine, and suggested that I may benefit further from a full abdominoplasty.

Complete Abdominoplasty = removes excess skin and reshapes the abdominal muscles in those who have had pregnancies like mine, wherein the muscles of the abdomen are separated.

He then suggested that fixing the core muscles of my abdomen may help with my neck and migraine issues. I could’ve kissed him. I’d always planned to have a partial abdominoplasty someday in the very distant future, but the suggestion of a life without pain made baby angels weep with the awesome.

The surgery was fine, as far as surgeries go — I didn’t die on the table or anything — and I even got some pretty nifty drains sticking out of either side of me, which made me kinda feel bionic and wish that I’d asked him to put in some steel plates or machines in my gut, further allowing me to become partially robotic.

The recovery, though, can best be described as excruciating. Turns out, that even my wonky abdominal muscles had been doing their thang, which meant that I spent many hours laying on the couch, trying to ascertain whether or not peeing myself was a better option than trying to get to the bathroom. It took weeks to be able to stand long enough to shower. It took nearly a year for me to regain full control of my muscles again.

The answer is somewhere in the middle. The migraines are still there, but they’re slightly more manageable, which is FULL of the awesome. And the results, well, I’ll leave you to see them (I’m sorry I have no before snaps for you): 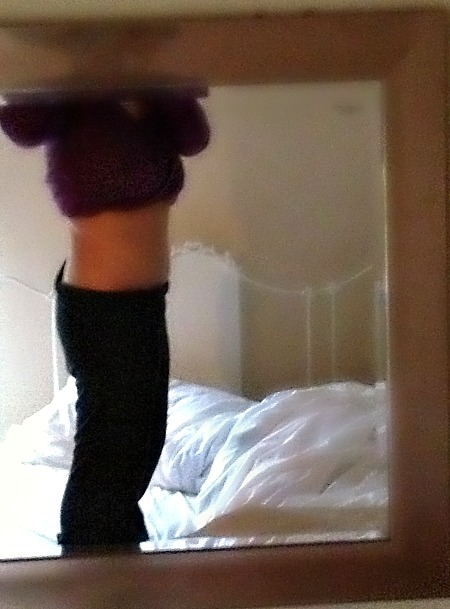 And no, this was not shot in softcore mode – I simply don’t own a full-length mirror.

Also: I am not colored like an oompa-loompa. Apparently, the lighting in my bedroom is mood-lighting. Which may explain why my cat opts to lick his bung on my bed rather than the floor.