It appears to me that people in the 1970’s had a proclivity towards bushes* and assorted foliage, if prefab neighborhood is any indication. Because EVERYONE I’ve talked to has said precisely the same thing. FUCK THE BUSHES. We’ve all had to yank out miles of ’em to give our houses that “no, a serial killer doesn’t live here” or “no, this house is NOT abandoned” look.

As I showed you before, my own house is no different. 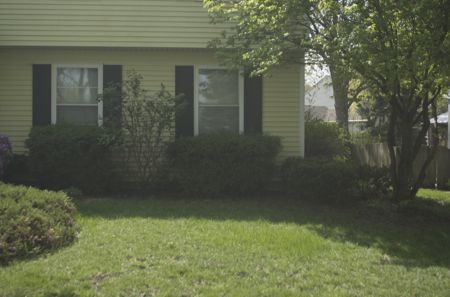 That was before I started.

Eventually, I made it to the Serial Killer Section of my hardware store and bought some very frightening implements of mass destruction which I promptly buried in my very own leg. Because I am not to be trusted with anything with a blade. Even a butter knife.

After much work, I got rid of…

Those motherfucking evergreen bushes, man. THE ROOTS ARE LIKE 8 MILES LONG. 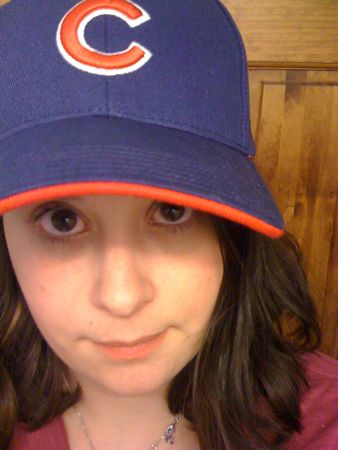 In fact, this is precisely how I feel when I think about evergreen bushes. Sadness, mixed with anger, mixed with resentment. Also, is it bizarre that the kid’s hat is too big for me? DO I HAVE A PINHEAD?

The rest of those bushes in the front are dead to me, too (not the lilac or the rhododendron). They just don’t know it. 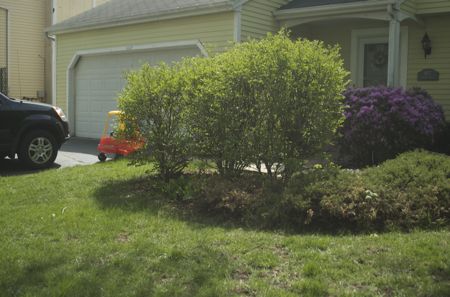 And the AFTER shot part number B (which also, isn’t done)(consider this the INTERLUDE, not to be confused with the QUAALUDE):

The rest of THAT ugly evergreen ground cover is going to be dug up (hopefully this week) so that I may perhaps not ever have to see an evergreen in my house so long as I live Jesus Christ AMEN.

And lastly, before any of you die of boredom, here is the only thing that looks marginally better, which you’d only see if you followed my Tweet stream and clicked over to see what I called “as boring as cat pictures.” 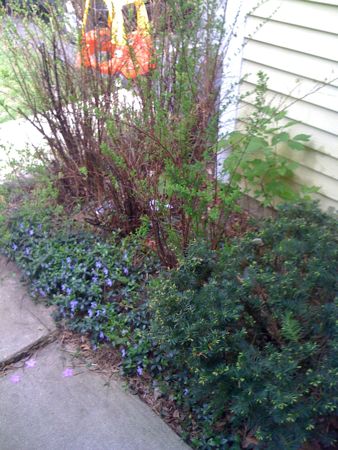 Butt-ass ugly, right? Like you just barfed on your monitor and now want to bill me for your keyboard? Well SORRY, Pranksters, but I can’t afford new keyboards for all of you. READ AT YOUR OWN RISK.

Anyway, I didn’t plant that butt-ugliness, I just looked at it and shook my head for years. Then I got sick of it, got angry and took my rage out on it.

This is what happened: 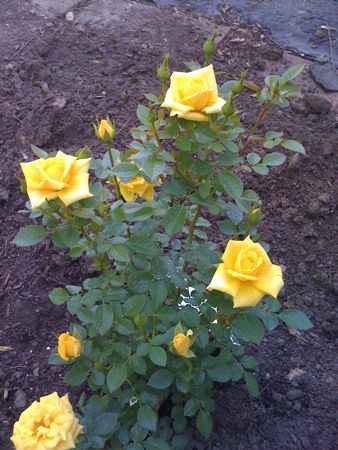 I grow roses, Pranksters, which is probably making those of you who didn’t know that scratch your head quizzically because it seems like a contradictory thing for me to do. But I do. Mostly rambling roses, but this is a miniature rose. It also WASN’T the sign I was referring to, but I thought it was lovely, no?

I’ll explain more about signs in another post because I was going to do it here, but I realized that it was going to be all LONG and shit and I know from my SEO tips that you cannot possibly read anything longer than 400 words.

I’m obsessing over Amy Winehouse’s Back to Black. If you don’t know that song, GET THEE TO AN iTUNES AND DOWNLOAD IT. Also, Amy, please get sober and make amazing music again.

Today is now Toy With Me day and I’m tackling cheating. It’s a tough, personal subject for me to talk about and I’d love to hear your thoughts, if you’d like to share.

101 thoughts on “Tripping Down Wisteria Lane (et. all)”