(The Daver was cunning in his ruthless choice of wedding dates. While my birthday falls smack dab in the middle of nothing (but IS, my French Friends, the day AFTER Bastille Day), Dave’s birthday is the kickoff of Dave’s Days. With the notable exception of the 9th, it’s a three-day Lovestock with my husband as the central star. Can you blame him?)

When I was a kid, I never imagined myself as a bride. Always one for sparkles, diamonds, flowing rivers of pink taffeta, as an adult, this shocks me that I didn’t have–or petition for–a mini-bridal dress. Although, now that I’m thinking about it, my mother may have banned that as she banned Barbies and guns*.

My parents are still happily married (or gently resigned to each other) so I wasn’t jaded by the stress of divorce, marriage and Being A Bride wasn’t on my radar. Being a ninja was, but not a bride.

After Ben was born, although I’d been briefly engaged to his father, I still never thought that I would get married. I figured that I was slotted walk the world as a single mother, and while I frequently wondered where I was going to get the male perspective to teach my son how to Be A Dude, finding a husband wasn’t something I thought I would do.

Until I met The Daver.

You know that annoying thing that married people say to single people where they’re all, “I knew it when I found him?” It’s bloody irritating to hear when you’re single because not only is it entirely cliched, it’s self-serving and obnoxious (hey, kind of like me!).

I knew it when I found him. Dave was The One. Like it or not, we were going to be together for a long, long, unbearably long time. Some day, I will write up Our Story, and The Internet can barf at it, because I totally would.

I look back at pictures of when we were first married, before Alex was born and nearly destroyed me. Before Amelia was here. And we look so young. Happy and young.

For our forth anniversary of wedded bliss, I got a power washer. And an orchid. I know this because I bought them myself. Because after 4 years, I’ve learned my lesson. I’d buy myself a card if that wasn’t just kind of weird and pointless. I mean, would I sign it myself, too?

The Daver, he makes me a better person.

We’re like Bert and Ernie. Cheese and Macaroni. Peanut Butter and Jelly. Mr. Wilson and Dennis the Menace (I will let you GUESS who I am).

(i do not know what it is about you that closes
and opens;only something in me understands
the voice of your eyes is deeper than all roses)
nobody, not even the rain, has such small hands 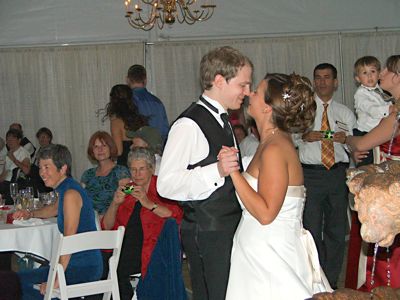 (anyone else humming “Jungle Fever” now?)

*I am not kidding.

Be sure to cast your vote for your favorite entry in “Aunt Becky Travels The World And Does Stuff.”