Wednesday evening found me on a train headed downtown. In a bizarre bit of strange luck, I found myself about to go speak to a writing class about blogging, which had filled me with all kinds of ennui. Especially since I didn’t have any black turtlenecks OR Woody Allen Glasses.

I figure that’s what a Liberal Arts Degree teaches: how to properly dress as a “writer.”

(well, that and how to excel at Ultimate Frisbee)

I spent minutes agonizing over how to properly dress before I threw on something I’d found under my bed and called it “good enough.” I figure I write in cat-hair coated Happy Pants and a t-shirt, so really, anything was a step up from that. We all know looking the part is half the battle.

I used to take the train to and from school and I’d completely forgotten how much I love to people-watch at the train station.

I stood near someone I deemed a “Real Housewife of Chicago,” based upon her spray tan and knee high boots coupled with a gigantic fur coat.

It was while talking to her that I saw him: he was The God of Luscious Mustaches everywhere and I was betwixt. Dressed head to toe in Spandex, listening to an iPod, and wearing the thick-rimmed glasses I so desperately required for that class. Certainly, I could have crushed his twiggy body for the glasses, but once I saw the mustache, I knew I could never harm him.

It was too perfect.

Perhaps I could get a PICTURE of his ‘stache. I contemplated how to do that (The Twitter had the best idea: pretend to be Canadian and ask for a picture with him) and couldn’t figure it out before he was lost in the breeze; on a different train car. The chance of a lifetime, and I’d wasted it.

I spent the rest of the train ride mourning all of the things that might have been; me and his mustache.

Somehow, I’ve managed to get on with my life. But the image of his mustache, carefully playing on the top of his lips, will haunt me forever.

(an artist’s representation of the mustache)(the part of the host will be played by Moby). 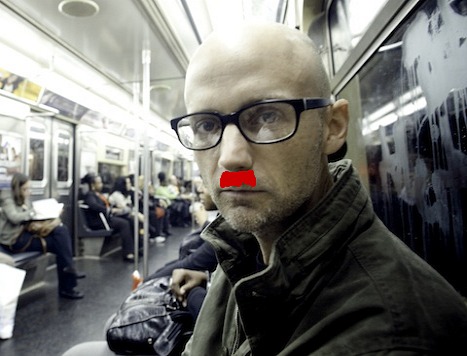 Did I mention he was a ginger with a Hitler Mustache?

It was truly a work of art.