In one of my favorite pictures of Young Aunt Becky, I’m wearing a flower in my hair. It’s not surprising that I’d have a flower in my hair, as my parents are fucking hippies and all that, but it was only recently that I identified that flower: it’s an orchid.

For those of you not playing along at home, I’m a little obsessive about my orchids. It’s not that I’ve named them and have wee little orchid dresses and suits painstakingly knitted for them that I change them in and out of, but that’s only because I can’t knit and the last thing I tried to name was a cat I was fostering that I named Little Cat. You can guess why.

But my favorite memories as a child involve being in a greenhouse somewhere or another (there are a shocking amount of greenhouses in the Chicagoland area); the smell of green, alive things filling my nostrils while the warm humidity curled my hair. I didn’t have a particularly happy childhood, so those really were the best of times, and the holidays always bring back the worst of it, that feeling of being on the outside, looking in. I wrote about it on Band Back Together, because, well, obviously.

Since I still live in Chicago where the temperatures range from Ass Cold to Ass Hot, and we’re clearly in the middle of an Ass Cold spell, I haven’t had much need to visit the greenhouse in a couple of months. And because Ass Cold lasts somewhere until mid-July here in Chicago, I didn’t expect to be visiting one until then.

Your Aunt Becky was sad in the pants.

Then, I found this video of Amelia eating a lollipop, for the first time, right? She was probably about 8 months old and it was about the most hilarious thing ever and I’ll have to upload it somehow for you because DUDE, HILARIOUS BABY.

In the background of the video, I can hear my three-year old son, Alex going on and on about going to the orchid greenhouse. He’s begging to go there.

He, too, loves greenhouses (I wrote about it here). He loves the garden and flowers and plants and digging in the earth and I’m looking forward to taking him to the Chicago Botanic Gardens some day soon. Clearly, I’ll wait until the ground isn’t covered in a thick blanket of snow and ice. Because I might as well save myself a trip to the North Shore and take him out to my backyard.

That video had given me an idear. We all know Aunt Becky doesn’t often have idears, so when I do, it’s important that I actually inform someone that my brain made a thought. So I did.

And that is how I ended up taking my three-year old son to the orchid greenhouse yesterday.

This isn’t your mom’s orchid greenhouse – presuming, of course, your mom HAD an orchid greenhouse. This is four acres of swinging death orchids in various stages of growth, all of which you can peruse and enjoy at your leisure. If you’re into that thing, which I TOTALLY am.

Alex ran inside, begging for an orchid of his own, a smile stretched ear to ear, the only three-year old on the planet who could properly identify varying orchid species.

It’s likely he’ll never know why I was a little misty-eyed by his delight at the orchid greenhouse. It’s likely he’ll never understand why having a connection to his great-grandfather is so important; that knowing where you came from is half of where you’re going. I can tell him, but he won’t understand that the same blood courses through both of our veins, just as it always has, uniting the three of us. 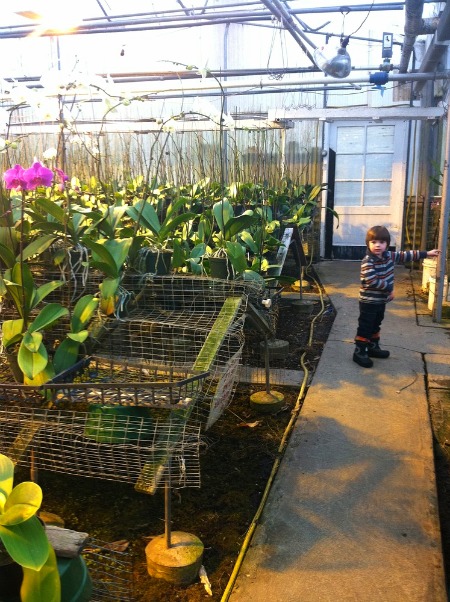 All he will understand is that while he ran through, yelling “HI ORCHIDS,” the orchids seemed to bob and wave, in an almost-human way they’d never done for me, as if to say, “Why hello there, Alex. We’ve been waiting to meet you.”

And it was then that my heart finally took flight. 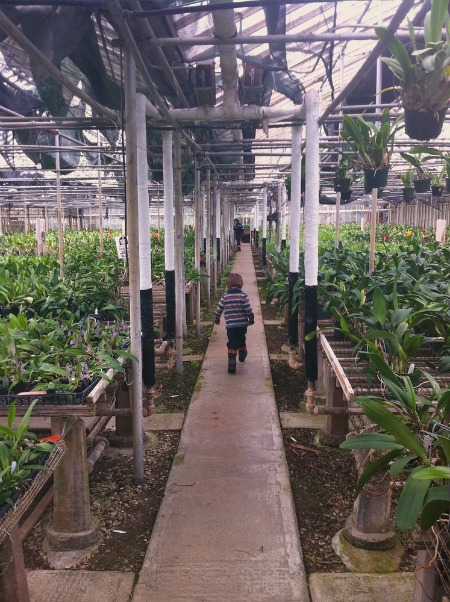 49 thoughts on “They Call Him The King Of The Orchids”