We were at Target this weekend (also known as My Social Life) (also known as My Boyfriend) buying both groceries and pants for my middle child. The groceries, I should clarify weren’t strictly for Alex, but rather stuff that we could all safely enjoy. Deliciously, even. Especially Uncrustables, which are pretty much heaven in a wee package.

In the children’s section, I happened to come across a shirt for my daughter that I found to be the proper amount of sass-a-frassery AND adorability and as such, I picked it up and exclaimed to Alex, who happened to be in the cart I was pushing (yes, we take two carts)(no we don’t FILL them), “Oh! Look at this cute cupcake shirt for Your Sister!”

Upon examination, Alex said “I want a cupcake shirt for Alex!”

What went through my head was this:

“Oh shit, Dave will kill me. This is a BABY FUCKING BLUE SHIRT with a frilly blue collar. And look at the cupcakes! They’re SPARKLY. I mean, there is not a single doubt that this shirt is for a girl. You couldn’t make this shirt more girly if you tried.”

“But I mean, he’s two years old! How the hell can you possibly tell a two year old that he can’t have a shirt because it’s for a girl? This is probably the most manly two-year old boy ever. His second word was penis. Who gives a fucking shit if he wears girl’s clothes? He’s a baby! HE’S STILL IN DIAPERS. I will CUT someone who looks at him funny for wearing girl’s clothes.”

So, I looked for the shirt in a 2T and I handed it to him. He grabbed it, hugged it and said, “I love you, Cupcake Shirt.”

Dave glared at me for a second before bursting out laughing because really, what the hell can you do? The shirt is pretty fucking cute. I kind of want one in my size. 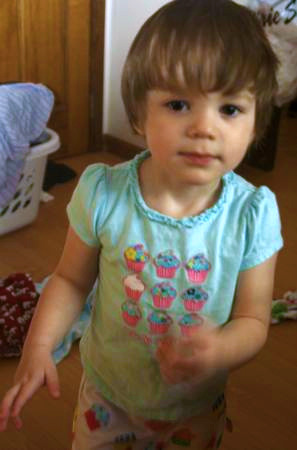 (yeah, the coloring is off because I messed with the flash by accident) 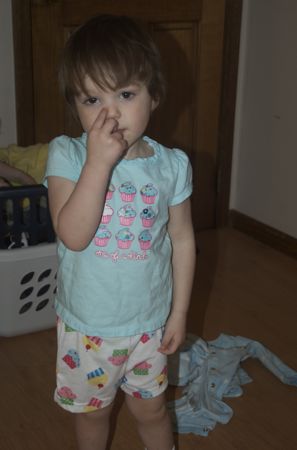 The shorts, he insisted upon wearing, are actually Mimi’s. 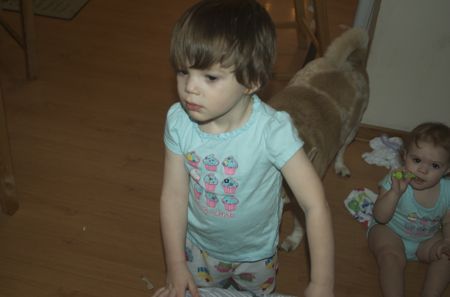 Never one to let an opportunity pass him by, he insisted that his sister wear her cupcake shirt as well. This is exactly why I love kids, even if they poo their pants and teethe on my legs.

149 thoughts on “They Call Him Prince Of The Cupcakes”