The Realtor described my basement as an “in-law arrangement.” It baffled me when I saw it because it was two finished rooms, a wet bar, and a bathroom complete with whirlpool bathtub.

It wasn’t until I saw the room with the washing machine and dryer (no carpeting or prettying up here, folks) that I got what she meant: a Dungeon. I could totally chain up rogue parents who wanted to move in against the walls, throw leftover chicken bones down the laundry chute and hell, there was even a (laundry) sink for water!

I crossed off “in-law arrangement” and wrote in “Awesome Dungeon” on the glossy brochure.

We made an offer the next day.

For quite awhile, The Dungeon was empty. We’d moved from a three-bedroom condo with no storage to a three-floor house with all kinds of storage, and at the time, there were only three of us. The amount of space felt gratuitous.

Eventually, I bought shelving and Rubbermaid bins, carefully sorted our stuff (I am, after all, my father’s daughter), labeled them with a Sharpie (I heart Sharpies) and stowed them on the shelves.

The Dungeon turned into The Room Where We Shove Crap We Don’t Know What Else To Do With (Bonus! Sorted Shelved Stuffs).

My coveted fiber-optic Christmas tree? Plop it there. Alex’s Halloweenier Costume? Eh, put it in The Dungeon. That Ugly Mirror I Bought But Never Hung Because It’s So Fug? Put ‘er down there. Deal later. The picture of the majestic jaguar that appeared out of nowhere and is too bizarre for even me to hang? Leave there; give to Dave’s Mom.

Cleaning The Dungeon is something I’ve wanted to take care of for a long time, and this weekend, after a long, anguished fight with The Daver, I saw no better time to begin. Some people eat their emotions, some drink them, others escape through television and movies. Me? I strap on my Super Becky Overachiever cape. I purge, I organize, and I clean. It helps organize my brain and process these weird things that you people call ‘feelings.’

I started in the middle of the room; tossing what we didn’t need, storing what we did, and donating anything salvageable. Within a couple of hours, I’d cleared a path to the shelves. Even with my careful labels, I no longer knew what they really contained.

I hauled out a large unlabeled blue bin and popped it open.

The box was full of craft supplies.

We all know that I’m as crafty as a blind woodchuck, but those supplies hadn’t been for me. Shit, I’d sooner gnaw off my fingers than craft something.

Standing in that basement, it was as though time had been frozen inside that box.

I’d birthed a baby boy, Benjamin, in August of 2001. In November, I’d gone back to work slinging pizza and beer. I enrolled in nursing school full-time in December. I worked weekends, cramming organic chemistry compounds into my brain between tables. Weekdays were spent in school, weeknights I studied. 7 days a week, no summers off, no rest for the wickedly weary.

My three-year old son watched me march across that stage as I graduated at the top of my nursing school class. I’d so wanted to do right by him. Benjamin, son of my right side, named that, hoping he’d pick up the very best bits of me. My right sides.

Ben and I moved into the condo in Oak Park post-graduation. I’d taken time off before the national nursing board exams, anxiously excited about being a Mom – a real one – for the first time.

I’d neglected to remember one thing. One very important thing.

All of those years I frantically ran around, trying to do right by him, I’d ignored it; reassured myself it would be okay, “when we were a real family.”

My son, Benjamin is autistic. Autistic kids are like Siamese Cats. They choose Their Person (or people) and That’s It. The rest of the world can rot in fucking hell so long as Their Person is near.

I was not his person.

Never have been. Not at birth, not after birth, not ever. We mostly got along but I was most assuredly Not His Person.

His Person was my mother, who now lived 45 minutes away. Dave was Another Person, but Dave also worked long hours, frequently not home until bedtime. Even when home, there was always more work.

Just me and my son. All those years I’d spent longing to be a real family, to feel like a mother, to be with my son…he hated it.

I went to bed alone each night. Dave working in the office; Ben fast asleep under the mural of The Planets we’d painstakingly painted, emptiness creeping inside me. “Tomorrow, it will get better,” I’d try and reassure myself, denying the sadness sitting on my chest, making it hard to breathe. “This is what you wanted. How can you be sad?”

Each night, the emptiness looming, I reassured myself with something else; another bright side.

When my friends complained about my son’s eating habits, my inability to “go out and party,” and how obnoxious my kid could be, I wrote it off. They were single and had no kids. I never allowed myself to feel hurt by that…or anything else.

When it was clear that Dave’s job was his wife, well, “he was doing what he had to to support his family. Look at the economy! This is what you wanted!”

My son watched a documentary about the Planets and my husband worked constantly. I’d gone from feeling purposeful to puttering about the condo; a shell of my former self, in a few short weeks.

I tried to fill my days. I swept the floors twice daily, washed them at least once. I washed and rewashed dishes. I scrubbed the bathroom tile with a toothbrush. Anything to stave off the loneliness.

Halloween-time, I thought maybe Ben and I could find some common ground: crafts! Off to the craft store, we went, where I bought a fuckton of crafty shit: paper, glue, crayons, scissors, glitter, stuff I’d have gone apeshit for as a kid. Ben was too busy organizing the shelf to notice. Oh well.

Panting and sweaty, I lugged our booty up to the third floor and spread it out on the dining room table. We were going to make MOTHERFUCKING PUMPKINS.

Except Ben had turned his Planets movie and was entirely uninterested in making MOTHERFUCKING PUMPKINS with me. I paused the movie. He wept for Grandma. That rejection finally opened a deep chasm of emptiness inside me.

Halfheartedly, I led him to our Craft Project.

Big, fake, cheerful smile on my face, I painted my MOTHERFUCKING PUMPKIN orange. Ben sat there, weeping for my mother. Smiling so hard that it hurt, I painted his pumpkin, too. He sobbed. I sent him back to the movie.

Then, I sat back down in front of the stupid pile of art supplies, buried my head in my hands, and I started to cry, too. Not the delicate kind of Soap Opera Cry, but the desperate, hurt, miserable cry that emanates from your bones.

I shoved the craft crap into that blue bin where it sat untouched for many years.

A perfectly captured freeze-frame of the way things were.

I held the tube of orange paint and overhead, I heard my three children thundering about, their footfalls booming as they happily chased each other. Their laughter echoing around the house; overcome with joy. I smiled as I repacked the paint, saving it for a cooped-up “I’m BOOOORED” day.

As I closed the lid, I marveled at the way we once were.

And the way we now are. 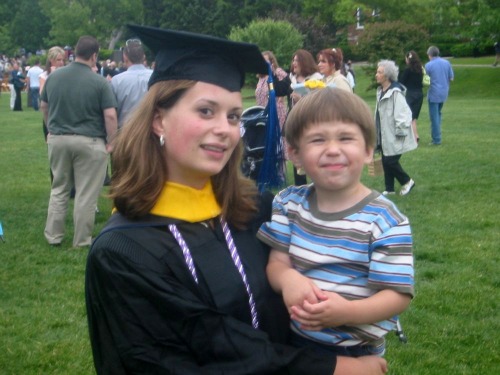 The way we were. 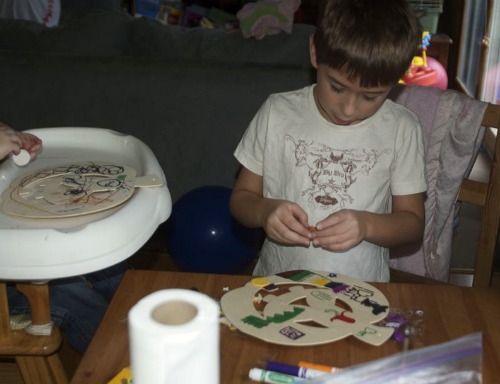 The way we are.