This spring, I made a deliberate attempt at making my house look as though a couple of serial killers didn’t live here. The 70’s, you see, seemed to be a time of Great Bushes, and the people whom we had purchased our home from hadn’t bothered to *snort* take care of their Bushes. So we had a Bush Overgrowth. *cackles*

Bush-Gate 2010 was born and I removed all 2,083 of the overgrown bushes in an effort to convince the neighborhood that perhaps my house was not populated by Dexter’s Biggest Fans. (you get your whore hands off my television husband)

And yet now, six months later, I ordered my groceries PeaPod AND attempted to use “dry” shampoo (turns out it’s bullshit) because I am so infirm. My skin is turning a milky-shade of white as I have been stuck on the couch, my muscles atrophying into puddles of goo. No longer can I say, “WHICH WAY TO THE GYM?” then kiss my arms as I flex.

I am a slug. A cockroach. An OLD PERSON. If I fell, I couldn’t get up. I need one of those Life Alert things. (much as one of my Pranksters suggested)

More than that, I’m afraid that my neighbors will think that I’ve been chopped up into tiny bits and shoved down the garbage disposal because they haven’t seen me. Every time the phone rings, I figure it’s the cops investigating a possible homicide at my residence. You know, since Becky Sherrick Harks hasn’t been seen in nearly two weeks and even had groceries delivered (I hate ordering PeaPod).

I may not be particularly smart OR handy, but I am the person who is outside puttering around and staring at the car, willing whatever problem its having (JOHN C MAYER) to be fixed by sheer mental power alone. I’ll stand there staring, waiting until the solution jumps out at me, or my neighbor comes and points out out. I’ll let YOU guess which comes first.

So for me not to be outside at all is troublesome.

I’d guess that the neighborhood is going to be covered with HAVE YOU SEEN THIS PERSON? signs soon. Not because I’m popular, just because if someone goes missing in your neighborhood, do you REALLY want to say, “Oh, I did NOTHING about it?”

There will be a search of the neighborhood, I’d bet and maybe even some of those rescue body dogs. Hopefully the dogs will uncover another murder since I am not actually dead. Merely pasty and slug-like.

Eventually, one of the kids will inform the search parties, or the weeping “WHY GOD WHY” ladies that have never known me, yet feel compelled to cry at my “death” that I am not exactly dead, merely bored and stuck on the couch.

The search people will be mad, of course, but really, who do they have to blame but themselves?

I would have told them I wasn’t dead or missing. 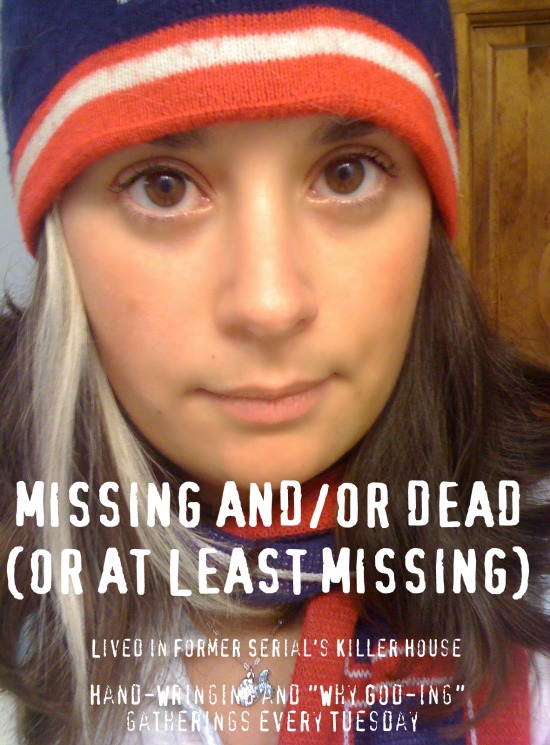 56 thoughts on “The Serial Killer Next Door”