So today, Pranksters, I have a guest post from Team Mandy from Harper’s Happenings. She’s also on Twitter, here. Not only is she hilarious, but I also MET her in NYC and gave her one of my Shut Your Whore Mouth Shirts before we went to Sparklecorn/Prom, which is awesome. Because she wore it. See? I tweeted this last night, so if you are seeing it again and annoyed, FORGIVENESS (even if, even if, you don’t looooove me anymore). 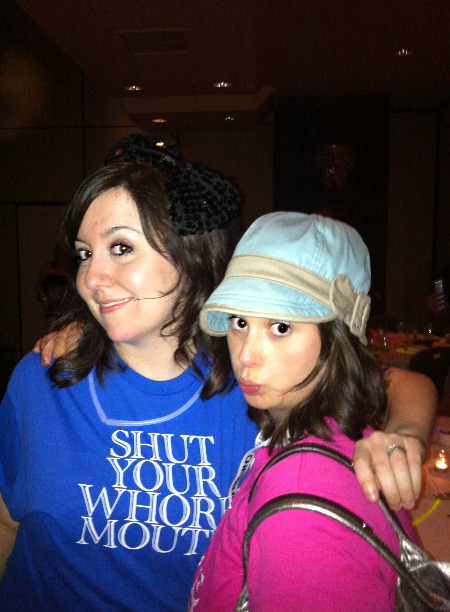 I’m thinking of making a Flickr page for anyone who buys these shirts so we can all revel in our awesomeness. Thoughts? I HAVE a public Flickr account, and we can totally be BFF but they just marked me as Adult Content, even though my account is LITERALLY pictures of my kids and not nekkid boobies or anything.

So, if you want to see me, you have to change your settings. WHATEVER.

ALSO, Mushroom Printing is UP, yo. Ready for ACTION.

Now, onto the action.

so this one time i was attempting to shop for a dress for BlogHer (because seriously? goldfish crackers deeply encrusted into jeans and whatnot doesn’t scream “new york city!”. at all.) and looked at my phone to see a message from our very own Aunt Becky. it read “hey slore. want to guest post for me sometime?”. after i promptly gagged (think dumb and dumber), i responded calling her a slag.  so yeah, here we are. romantic, no?

speaking of farts (i’m all class, folks. all class), i thought i’d share a story from back in the day that i have tried hard to remove from my memory – because of the level of embarrassment – but that is damn funny looking back. hold on to your undies, Pranksters (if i may call you that), because this one is full of the awesome. at least for people who it didn’t happen to.

when i was 22 i was having some digestive issues. i was often feeling sick to my stomach, and i was missing a lot of work because of it. my age automatically threw me into the “maybe she should lay off the sauce and come to work” category with my co-workers, but that wasn’t the case (for the most part – i mean i did my fair share of one dollar vodka sour nights at the local crap bar). i finally decided to go to the urgent care to see what was up. after an x-ray thingy of my insides, the doctor proclaimed what my family had always been telling me – “you’re full of shit”.

(can we take a moment to focus on what a kick ass doctor he was? because he really said that.)

“when was the last time you had a bowel movement?”, he asked.

after thinking for a while i was all “last week? two weeks ago?”.

turns out that is NOT normal. who knew? well not me, because for me it was the norm. awful right? pooping is the best. and i was being deprived! so with some powdery stuff to make me shit and a referral to a special poop doctor (i’m positive that is what their documents say), i was off.

my first trip to my special poop doctor was a little nerve wracking to say the least. i mean, i was young, embarrassed, and going to a doctor who was going to only talk to me about the function of my butt hole. as i sat in the waiting room i felt like the other patients were looking at me like, “wonder what up with her butt hole”, which made me want to scream “YOUR BUTT HOLE IS HERE TOO DUDES!”.

my special poop doctor was a very sweet indian woman with a pretty thick accent. i liked her right away, except for her use of the words anus, feces, and bowel movement. i mean i get it, you’re a doctor so you have to use the technical terms, but really lady, this would be more comfortable for me if you’d just say butt hole, shit or poop. i mean honestly.

she asked me all kinds of questions about my eating habits (which clearly did not include enough fiber) and junk, and a bunch of weird questions that i answered uncomfortably. then she was all “have you ever looked at your anus with a mirror?”.

i wanted to yell “WHAT KIND OF POOP DOCTOR ARE YOU, YOU SICKO!”, but refrained and answered, “um, no”. BECAUSE OBVIOUSLY, NO.

“the reason i ask is because you could have (insert medical term) around your anus and that can be causing you to not feel the urge to take a BM”. she said in her thick accent.

“oh. um, yeah i’ve never done that. should i?”, i asked, knowing what her answer would be.

“yes. just use a mirror and look for anything out of the ordinary”.

“you know what? since you’re here, let’s just look now. the restroom is right across the hall, i will meet you in there”.

WAIT WHAT? i started to sweat. my hands got sticky. my heart was beating fast. this is not what i signed up for! i just want to poop like a normal person, not put my BH on display for some perfect stranger (who at this point i had decided i now hated). i tried to stall, come up with reasons i just couldn’t show her my butt hole today, but before i knew it, she had ushered me over to the ladies room and told me to holler when i was ready.

ready? ready for you to come examine my poop shoot? yeah, you’ll be waiting for a while lady. and why am i in a bathroom? can’t you look at it in the exam room? what the DUECE is going on here?!

soon my fears were realized as she came in (did i say i was ready? NO) and explained to me she could only see the (insert medical term here) if i was pushing like i was going poop. phenomenal. this is why we’re in the bathroom. you guys, i had to sit on the toilet, lean forward in a way so that she could see my dumper and then push as if i was taking a shit. WHILE A LITTLE INDIAN LADY WAS LOOKING.

i will never in my life forget being bent over that toilet, pants at my ankles, and being told “it’s ok if you fart”. practically face first into the tile, the most exposed i had ever been (later this story would be laughable as i pooped on a table having my daughter) and trying not to crap on an indian lady.

if i can give you any advice, Pranksters, it would be to EAT YOUR FIBER. eat your fiber hard.

115 thoughts on “The Perils of Number Two”