You’ll be glad (or dismayed) to know that I am not dead.

While the freezer door did make an attempt upon my life, I am still upright and breathing. But after the gas leak from a dead pilot light the week before, I’m now warily watching the washer/dryer unit to see when, in fact, it will make its play to kill me. I can only surmise that it is plotting against me, but without real proof, I cannot be sure. So rather than being productive, I instead watch it with the phone book open to the number of the local hospital, as a warning of sorts, that if it does, in fact, try to kill me, I have backup motherfucker. And not Life Alert, although that may be a wise investment.

In that time, though, I’ve been thinking a lot about the lies we tell ourselves:

“Tomorrow, I’ll feel better.”
“It was the right decision.”
“I can totally fit into those pants.”
“I like being a morning person.”
“John C. Mayer isn’t ALL bad.”
“If only X happens, things will work out.”

I wonder, sometimes, if we tell ourselves these lies simply to avoid the truth: that the moment we’re in is hard; that the end is nowhere in sight; that we do really jam out to John C. Mayer when no one is looking; that becoming a morning person means that we are now able to be smugly superior to the rest of those crazy “late sleepers.”

I don’t know the answer.

And I don’t know if the lies we tell ourselves in order to believe that somehow Our Happy is just around that corner, ready to spring out and beat The Happy into our brains is a healthy way to cope. I don’t know if dwelling on the past, mulling over the mistakes we’ve made and the things we’ve done that have hurt others is a better solution.

I’d surmise that the answer lies somewhere in the middle – we tell ourselves the things that allow us to feel briefly better, like it was all meant something, that someday, the meaning of the tunnel of shit we’re wading through had a far greater purpose: without X, Y wouldn’t have happened. I like to believe that sentiment  – normally I find that the tunnel of shit does bring about, in time, diamonds, and not rocks.

Take for example, my daughter, who was born with a previously undiagnosed neural tube defect called an “encephalocele,” which is a fancy way of saying that her skull got lazy, didn’t close, and brain matter developed outside of her head. While normally diagnosed prenatally during a routine ultrasound, someone somehow somewhere fucked up and managed to NOT see the hole in her skull. In normal conversation, I tell people that “it’s better that I didn’t know she had an encephalocele ahead of time,” because it would’ve “made the pregnancy that much more stressful.”

I don’t know if that’s true – if it’s another lie I tell myself to make myself feel better – there’s nothing like dangling in the labor room, listening to the NICU whirr and click and clack and whisper about your baby while you’re stuck there, delivering the placenta and getting your girl bits stitched up while your daughter, mere minutes old, is in the midst of getting an examination that will seal her fate as one of two things:

B) Something really, REALLY bad.

Any of you who’ve read my blog know what happened: she now has a handy skull graft and that pesky brain tissue exploding out of the back of her head, well, it’s been long-since removed. The scar is still there, growing along with her, as she whirls and twirls and plays and giggles. I couldn’t have asked for a better outcome for a situation so very dire. 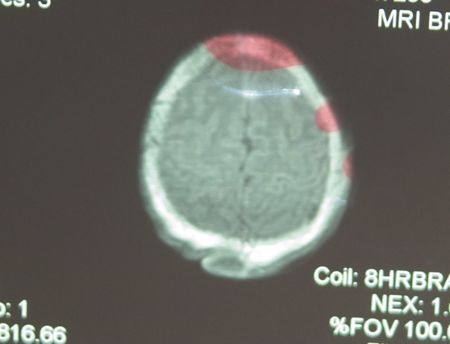 While the situation was, to put it in the most mild way possible, terrible, some good has sprung of it.

When I first confessed my shame at having post-traumatic stress disorder (this post) it spurned an idea that had been rattling around my own brain for a long time – putting together a group blog for people to share their stories of darkness and light, and pair these stories with resources about a particular subject. I recall scouring the Internet for information about encephaloceles after Amelia was born only to find that the information was scattered; not put together in any real order. I wanted to change that.

I formed Band Back Together in 2010 to do just that: allow people a safe moderated environment to pull their skeletons from the closet and make them dance the tango, in the hopes that by telling our truth, we’d be able to grow, learn, and begin to heal. One of the most powerful things in the world is to realize that we are not alone in this world; that others have felt the way that we have.

That’s the reason the wonderful volunteers at Band Back Together (if you’re into volunteering with us, email volunteer@bandbacktogether.com) continues to post stories – your stories – and create readable and informative resources. It’s also why I continue to write out my life for anyone to read, despite thoughts of, after eleventy-nine years, simply calling it done and walking away from my blog. I haven’t. Not because I haven’t wanted to, but because if one person out there can read the words I’ve written – some good, some great, most bad – then I have done something with my life.

And despite my shortcomings and failures; the lies I tell myself to get one foot in front of the other, that means something.

34 thoughts on “The Lies We Tell Ourselves”