Thank you to LeapFrog for sponsoring this review. For more information about the LeapFrog Animal Adventure Learning Table, please visit their website. #LFAnimalAdv #spon

One of the things that drives me craziest about kids toys is not the whole gendered toy thing – I mean, my daughter LOVES pink and her name is Amelia which means that a pink airplane? Pretty freakin’ rad. So while I could go on about that – my mother would approve heartily of me bashing gendered stereotypes – it’s not something I think about terribly often.

No. That’s not what bugs me.

What bugs me about kid’s toys is that they’re aged all wrong.

Sure, they may be labeled as “appropriate for ages 6 months to three years,” (in compliance with the whole, “let’s not let your kids choke on stuff-n-things”) but really, my five year old is going to have a TON more fun with a toy designed for a toddler than a toddler will. He’s the one who can read and write and sing along to whatever annoying song the toy sings, which by the by, is another thing that annoys me – those freakin’ things go off in the middle of the damn night, nearly causing me to pee the bed as a discombobulated voice asks me if I’m “ready to count now?”

LeapFrog, who happens to be one of my most favorite toy manufacturers (besides Legos, because, well, the kids are OBSESSED with Legos) ever, sent me an Animal Adventure Learning Table, which was rad, because then my kids had something new to play with at Mom’s house. New (or used), in kid eyes, always equals better. This was no different. 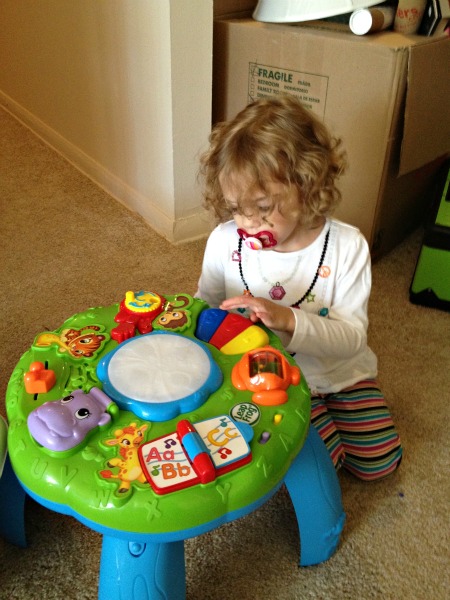 (totally note the boxes behind her – I wasn’t quite done unpacking. That’s a job for THIS weekend)

Like other LeapFrog toys (of which I’ve owned plenty)(no, not for myself)(weird, I know), it’s a nice sturdy toy, that, to be honest, I’m thankful because my children are now old enough to enjoy it. While it would make a fabulous thing for me to stub my toes on while a toddler used it to practice standing, puking and walking, it’s much better suited for older kids. Kinda like that kid’s Blackberry I bought Alex back when I was a Blackberry Widow, which bored him to tears then, but now, finds it wildly entertaining.

She played with the thing for at least twenty minutes, which is practically an eternity for a three year old, and honestly? The noises it makes are kinda soothing and not nearly as grating as some of the toys the kids’ve been given over the years. (note to self: buy new parent friends THE MOST ANNOYING SOUNDING TOYS EVER) Alex was similarly impressed, although he was busily playing Batman, which is his new favorite game. Just WAIT until you hear what his decisions about what we all have to be for Halloween – it’s both hilarious and full of the awesome.

And while the nights (when the kids are at Dad’s house) are lonesome, the apartment filled with no pattering of wee footsteps, I know one thing and I know it well.

The kids? They’re gonna be alright.

I carry that thought with me all day long.

I was selected for this opportunity as a compensated member of Clever Girls Collective and received free product from LeapFrog to review.

The content and opinions expressed here are all my own. #LFAnimalAdventures #spon

12 thoughts on “The Kids Are Alright (Part Deux)”