As I type this post to you, I hate to tell you this, but I may or may not be dying. I know, your Google Reader* probably thanks you. It’s through a haze of Delsym that these words are arranging themselves into sentences that may or may not make more or less sense than normal, but onward! Onward and upward we will forage, Internet!

Because that is what we do!

Halloween. Yes, Halloween. This is the obligatory after Halloween post where no one will read these words anyway, because, oh! look! funny looking cute kids! A blue car! A frog reading Aristotle! HA!

On Friday, I was all Mr. Burns cackling that I was gonna pay Alex back for sleepless nights and being an overall difficult baby by making him dress up in ridiculous costumes before he made me buy him costumes like dragon warrior stealth slasher or (the bane of my existence) Star Wars Characters. 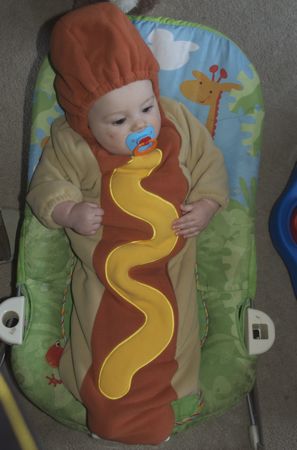 I mean seriously, how much worse can you get? The kid was a HOT DOG! HA.

(also, I was in the wild throes of sleep deprivation).

The Hedgehog (which everyone thought was a rat. Which, hi, NO) 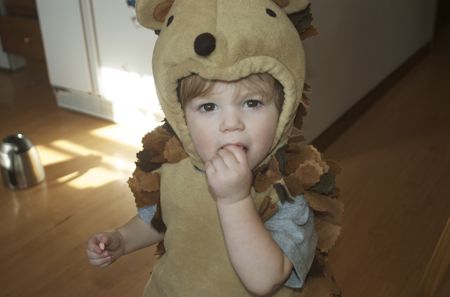 Okay, so this costume was funking adorable and he was thirty quadrillion times cuter than my own! live! hedgehog Tate, who was an ASSHOLE. Also, I bribed Alex to pose for this picture by giving him candy because I win at life and motherhood. 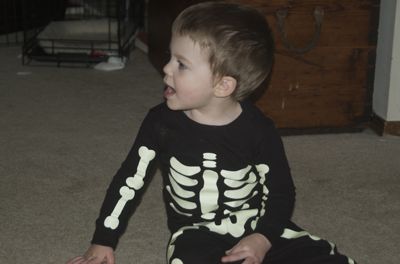 This is what Alex went dressed as for Halloween this year. A Skelly-ton. A Skelling-ton.

When posed with the question, “do you want to put on your costume?” Alex said, “NO!” and then threw his wee body with the head the size of a globe on the floor and began to flail about.

Somehow, it seemed unfair to force it upon him, although I considered it for a millisecond. In fact, he’s squawking indignantly, if you can imagine, at me taking this picture, because the flash is bothering his wee eyes. Delicate flower, that one.

Speaking of delicate flowers, here is his sister: 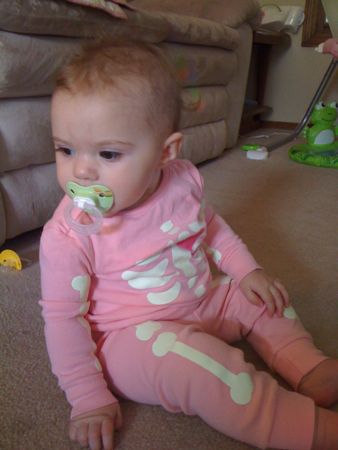 Also as a Skelling-ton, pre-Halloween (this was on Facebook, so I’m sorry for those of you squawking at the outrage of a repeat), a much calmer child in the eyes of the paparazzi. 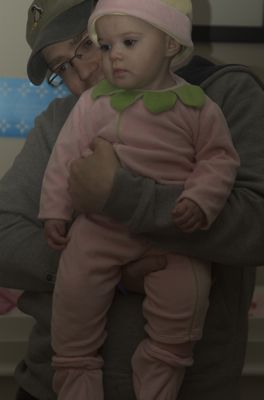 My very own Flower Grrrrl, who was a freaking trouper and a half.

I should have some additional pictures up on Facebook later in the week, so as not to slow the load time of my blog any further. Because I am not only a Queen among Men, but a considerate soul.

And lastly, but certainly but not least, the person certain to win biggest brother of the freaking century. The person who made sure to ask at every house for candy for his brother, even when his brother was too afraid to go up to the house himself, my first son… 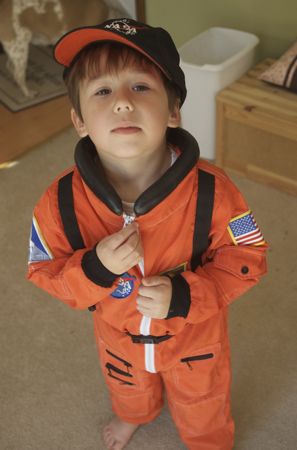 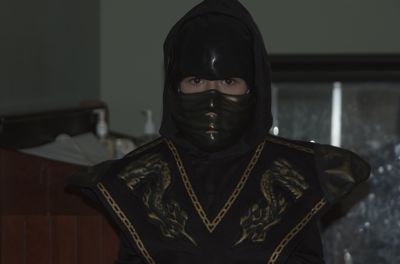 A ninja. Which proves that I am not a little boy because a ninja? REALLY? I don’t get it AT ALL.

Aside from being on my Death Bed now, Halloween was a rousing success (SHOCKING) and I’m pretty sure that no one tried to poison the kids.

How was your Halloween?

This post was totally powered by Delsym and a wicked fever.

*your Google Reader can also send me diamonds and other precious stones to thank me for NOT signing up for NaBloWhatever, that daily posting thing that runs through the month of November. Because, obviously.

151 thoughts on “The Halloweenier Strikes Back”