So I’ve frequently waxed on about how my daughter kicked neurosurgery in the balls because, well, anyone who undergoes brain surgery as a 3 week old and walks off with as wicked a scar as my Mimi did deserves to say that about themselves (or have their mother brag about it). Her scar is such that she’s going to have to come up with some kind of wicked story like, “bar fight” which is my go-to story when strangers ask.

Trust me, I get some looks.

Later, I said that Mimi kicked ass because she beat a diagnosis that often kills babies, or leaves them severely retarded. She’s entirely normal, if not a bit feisty, which, again, kicks ass.

What I didn’t count on was that my daughter would be a bruiser.

Sure, my mother often said that I was born “smoking a cigar and barking out orders” but I sort of thought that she meant that I was a short, fat, balding bookie kind of baby. I don’t know why I always pictured myself as The Penguin from Batman, but I did.

I didn’t think she meant that I was a BRUISER. Apparently, THAT was what she meant, not that I was a villain-baby, because to hear her talk about it, she STILL shudders when she describes me as a baby.

Maybe that was why my first word was “fuck.” I don’t know. But it does explain a whole lot about my personality now, doesn’t it? (just nod, it’s easier)

But that would be my daughter, who is, apparently, myself, who is, without a doubt, kicking all of our asses to get what she wants. It doesn’t really matter WHAT it is, she’ll fight you for it. Ear-bleeding shrieks followed by tiny fingered pinches, then followed by a gaze from those beautiful, luminous eyes, I mean, you IMAGINED that tantrum, didn’t you?

Nothing this sweet looking could be such a devil in disguise:

Underneath that sweet, cake-eating exterior, she’s plotting how to steal your wallet AND car-keys. Amelia, she’s a thug-a-lug.

Really, I thought that my testosterone-fueled middle son would have been the member of the Sausage Factory to contend with but it turns out that his sister is going to be the member of the family that will be all DROP AND GIVE ME FIFTY, SOLDIER. Mimi, who will probably drop the fluffy sounding name and go by the more refined sounding “A-Dog” will make an excellent drill sergeant where she will inflict her torture on her troops so much that they will have nightmares that she is standing over them, pinching them.

Of course, she will be standing over them, pinching them while they sleep, because she is THAT kind of bruiser.

I’m wicked proud of my ickle A-Dog, even though I’m sure eventually she’ll try to cut my hair into a regulation buzz-cut every time she sees me, which is fine, so long as I don’t go to sleep (Aunt Becky doesn’t sleep, she waits). Because I bet she WOULD do it while I sleep.

It’s a good thing, I think. The world needs more strong, fearless, smart, pinchy females to stomp the earth in their combat boots making everything their bitch. Amelia will be like Chuck Norris, only cuter.

Just don’t tell her I called her cute. She’ll punch me in the throat. 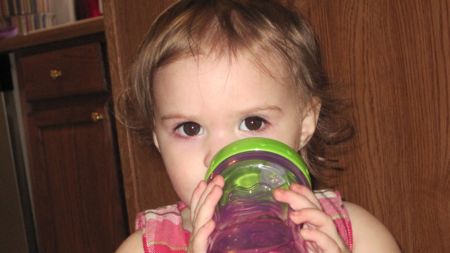 Fear me world, because I have come to CONQUER you.

Once I finish my juicey.

At Toy With Me, I’m talking about my BRILLIANT plan: Peckers of the Caribbean.