The first thing my mother said about me after I was born was that I had a “face only a mother would love.” According to the doctor, I’d been in some really awkward birthing position, shoved up against some bone or another, and that lead to my black eyes and nose so swollen it took up damn near half of my face.

Not with the whole “face only a mother would love” because obviously I found someone who if he doesn’t LOVE me, at least tolerates me and my face, but with the “awkward birthing position.”

No, I’m pretty sure that Baby Aunt Becky had lost her way while trying to get out of the womb and was desperately battling to exit THE WRONG WAY. Or maybe I slipped and fell, cracking gnomish my face open. That’s probably more like it.

With genetics like mine it’s a wonder I ever learned to properly walk.

I suppose the term “walk” is debatable since I have tripped over lines in my Pergo floor, routinely fall UP the stairs and just last summer fell through the screen door. All stone-cold sober as a matter of fact.

My father, tasked with teaching me to ride a bike, swears I didn’t learn until I was close to 11 but I think that it was probably closer to 14 by which time many of my friends had cars, so I didn’t ever really get a chance to hone my sweet-ass bike riding skills.

The problem with being a Super Klutz, Overachiever is this (besides those pesky ER co-pays) you have to explain to people how you sustained injuries like these:

*Breaking a toe while making a sandwich

Or, maybe even THIS: 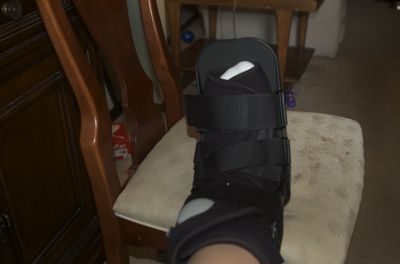 This would be what I got to wear during most of my pregnancy with Mimi, thanks to a miscalculation on my part where I slipped on a rogue BABY GATE and broke some tendons in my fucking foot.

No, there was no fire. I wasn’t saving cuddly kittens from a burning building or curing world hunger. I was simply walking down stairs and made a misstep that cost me a whole hell of a lot of pain, suffering and dignity (what dignity?).

(As a side note, people who wear walking casts are not retarded. Just because I was wearing Das Boot does not mean that I was any stupider than I was before. It did not require that you speak to me in slow small sentences.

The only question I have, mother fucker, is how far up my ass I can shove my boot before I hit your small intestine.

Also? People with disabilities don’t deserve to be STARED at. Just because I was pregnant and crippled did not mean that I was any more of a freak show than I was before. So take a picture, motherfucker, I fucking dare you. I’ll shove that camera so far down your throat you’ll be flashing people for months.

So to you people with disabilities that don’t go away after months in a walking cast? I am sorry. Genuinely. People treat you like a fucking freak show and seriously, wow, that fucking sucks.)

Anyway. Coming up with new and inventive ways to explain away dumb ass injuries is always really tricky because you can only say, “I broke my toe making a sandwich” and get the standard blink, blink, blink response before you realize that you have to come up with something more…heroic.

Or even, “I twisted my ankle running down the stairs of a burning building trying to save a basket of orphaned puppies!” Everyone loves a feel-good story about adorable fluffy puppies or kitties. Just watch the news!

Now I’m just going to have to teach Amelia to carefully explain that this: 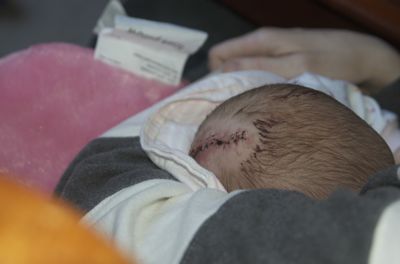 Is from a wicked bar fight. When people question how a baby got into a bar fight, she’ll have to carefully say, “You should SEE the other baby…” And then, BAM! the scar will be easily explained away. No one can question a kid with a scar that takes up half of her head (it’s, well, stretched since this picture was taken).

Twitter informed me last night that I’m not the only one with really ridiculous injuries which sent me to bed laughing my ASS off. Especially the conversation in which I was planning to sue the sandwich for breaking my toe and appear on both the People’s Court and Maury (paternity testing)(duh) for it.

THIS is why I adore Twitter. The mix of the absurd and the sublime.

So gather ’round Das Boot, The Internet, and tell Your Aunt Becky if you’ve had any wacky injuries.