In a stunning fit of anal-retentiveness rivaled only by the time I found Bath and Body Works doing a 5 for 10 sale on antibacterial soap, I went through my blog roll the other day when I was having a particularly dreary, maudlin day. I don’t know if you have one, a blog roll, I mean, not a maudlin day, because, let’s face it, I think that emo music exists for a REASON, but blog rolls are a total annoyance.

I’ve operated thus far, as you can, by the length of it, tell, under the assumption that they are worth the hassle of upkeep of it. But, when I update it, I inevitably delete someone by accident. Mainly because I am stupid and also because I am dumb.

SO. Here is your chance, my band of merry pranksters, so gather ’round Aunt Becky’s knee: please, if you care to, go to the side bar, and click on the link for “Aunt Becky’s Band Of Merry Pranksters” (I’d link to it, but it gives YOU a dead link if I do that because of the aforementioned stupidity on my end). IF you are not listed AND you are a friend of mine (you comment here, you have me on your blogroll, etc, etc, you make me cookies, I wash your car for you, we make out, whatever):

SEND ME AN EMAIL and SEND ME THE LINK WITH YOUR BLOG NAME.

Do not leave it in a comment or I will forget it.

Currently I cannot remember the last time I gave Amelia Motrin for her fever, let alone to go back and try and piece together anything greater than two words. And I will obviously be too busy cross-stitching all of your comments to remember to add them to my blogroll. So shoot email to aunt.becky.sucks (at) gmail (dot) com or auntbeckyrules (at) gmail (dot) com.

(I’m always torn on the whole HAVING a blogroll thing. Is it worth it? I really don’t know.)

I have been told that you can unsubscribe then REsubscribe and that fixes the problem. Beyond that, I am bewildered.

The first thing that I was told after I pushed Alex rather quickly from my nether bits was that he was “beautiful.” Upon first glance, I thought he kind of looked like a wet rat, and even after he was toweled off, I wasn’t entirely sure I was off base in my assessment. I didn’t CARE, mind you, what he looked like.

The older he got, the less rat-like he looked and the more frequently I was stopped by strangers so that they could admire my child. I never really thought of him as beautiful, in fact, the only adjectives I could think to describe Alex were “devilish” or “payback” because he wouldn’t let even his own father lay so much as a pinkie finger on his delicate ass without him screaming violently.

(as an aside: Alex is the only child of mine whom anyone has stopped–often–us for to comment on. When he was younger it was all.the.time. And I mean all.the.time. It’s not that I don’t think Alex is cute, he is, but…I don’t know, he’s not THAT cute.)

(As an aside TO the aside: If you are going to stop a family that has 2 children, one who is a baby and one who can not only walk and talk but is talking TO YOU, why don’t you fucking pay attention to that child instead of the fucking baby who hates you because you are not his mother and you’re in his face?

Alex was a Momma’s Boy.

A Momma’s Boy who, according to the people who stopped me as my son was dressed head to toe in blue, looked like he sported a vagina. 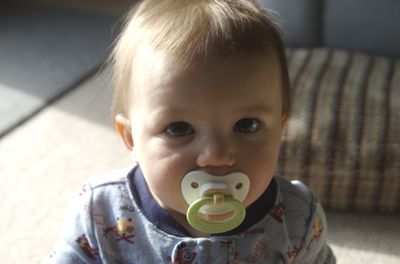 I may have a mullet because my mother refused to cut my hair, but I do not have a vagina, people. Thank you.

The other thing that I heard with such alarming regularity that it started to make me want to rupture my eardrum with a red hot poker is this: “WOW! He looks just like Dave.” Which, he does. Sort of.

After 9 months of pure pukey torture, 12 months of being attached at the nipple, the kid could have had the common courtesy to at least SORT OF look like his mother, you know?

But no. He doesn’t LOOK like me. But he IS me. From the tippy top of his hard headed I-will-get-my-fucking-way-if-it-kills-me down to his I-will-cut-off-my -nose-to-spite-my-face butt.

I didn’t KNOW that anyone on the planet could possibly be as stubborn as I am, but yes, Internet, I am here to tell you that not only it is possible, it is currently upstairs, refusing to say “I’m sorry” not because it is not sorry, but because I insisted upon it. Had I NOT insisted, he’d have done it, but because I had, he won’t.

Did you catch that?

If I say, “Hey Alex, you say, “THANK YOU, BEN,”” he will dig in his heels, and refuse. No length of time out will persuade him to do something that naturally he will do–it isn’t the thanking his brother part that he’s refusing, it’s because I told him to.

Dinner Time has become an equally shall we say hair-raising event, if “hair-raising” is code for “makes me desperately want to tongue a bottle of Nyquil” and then cry hysterically to someone who won’t just tell me “eventually, he’ll eat.” Because, wow, the kid is WILLFUL.

Alex, he used to be my eating child and it was so lovely after having a child with bona fide food issues relating to his autism. Ben would happily live on a steady diet of saltine crackers and lukewarm tap water and Alex would have–at some point in his life–eaten food that would sustain more than an ant.

But Ben eats now, mostly, now that getting Alex to do anything he doesn’t want to do is akin to backing a wild boar against a metal wall, so we just choose our battles and remember that multivitamins, like beer, are God’s way of reminding us that he loves us and wants us to be happy.

While Dr. Spock would probably call this a “phase” and tell me that Alex will “grow out of it,” Alex and I both know this is pure bullshit. The only way Alex is going to change his nature is the only way I’ll change mine: traumatic brain injury. Which, God willing, won’t happen.

So, until then, Alex and I will put on our boxing gloves and get into the ring to fight to the bloody end every time we need to determine who gets the last packet of barbecue sauce.

Good thing I still outweigh the SHIT out of him.