One of the ways that my friend KC suggested that I think of Amelia’s encephalocele was that her brain was just so full of awesomeness that it just..exploded out the back. Obviously one skull cavity wasn’t enough to contain all that awesomesauce. She might have been onto something there, because the kid is wicked-smart.

Or, at the very least, she’s my last hope. The shining light of intelligence and common sense in my house. The last bastion of all that might be right in my house.

My eldest, Ben, has never had a whole lot of common sense. He’s the kid that would probably Superman jump off my two-story house with a sheet tied around his neck if he had any more imagination. Thank the powers that be that he was born with as much imagination as I was.

Alex, though, I thought might whip him into shape, since he has Ben doing his bidding. Alex, even at 2.5, is an evil mastermind of a child, so I figured that he’d be the brains while Ben was the brawn.

Turns out Alex is mini-Chris Farley. He’s the kid who throws himself into walls on PURPOSE only to bounce off, hop back up and yell “I’M OKAY!!” When Dave’s says he’s my clone, I’m not entirely sure he’s being flattering.

My faith in Alex steering Ben into perhaps having an evil empire where they, oh, I don’t know, maybe made me boat-loads of cash while being evil somehow screeched to an audible halt the other day.

Mimi and I were playing trains in one room, and I watched as my son’s came in and mysteriously grabbed a couple of blankets and ran back out. I waited a couple of minutes and then yelled, “what are you doing?”

“Alex set up a slide!!” Ben happily replied to me.

Shockingly this did not make me feel any better.

Mimi and I followed them out to the other room where, in fact, Alex had set up a slide and we watched as the two lug-nuts we love so dearly slid off the back of the arm of the couch onto the floor below.

My son’s were sliding from the couch onto their heads.

No one was crying or complaining that it hurt; no. They were just using their thick skulls and faces to wipe the floor with. I swear I have never been so flabbergasted. Let’s be clear, my own IQ might rival that of peat moss, but I have never had the idea to use my face as the landing spot for falling from heights.

As soon as I recovered from my shock, I stopped them.

Then I informed my daughter that without her, her brothers might be lost forever, a couple of goons stuck picking their noses and jumping off things in the misguided idea that they can fly for the rest of their lives.

Let’s hope that she uses her power for GOOD and not evil.

I’m having a hard time talking about all of the chaos surrounding her first weeks of life, but I’m not having a hard time expressing my gratitude. With all of your help and support, I was able to turn what was a horrible, devastating time in my life into something else.

A couple of months ago, you helped vote for me in a contest with a cash prize. I promised I would donate that to the March of Dimes. Because the one bright spot in the whole fucked up situation was knowing that Mimi and I could help other people and other babies.

I officially became a March of Dimes Mom.

And I donated my winnings to the March of Dimes. I’d show you a receipt, but I figured you could just see that $250 was added to Team Mimi’s March of Dimes widget.

So thank you. All of you. 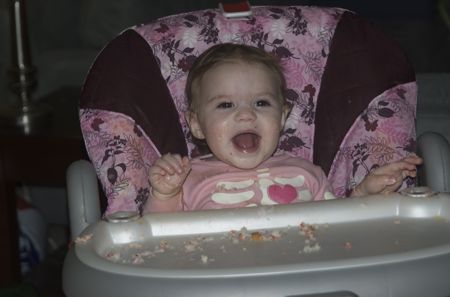 (why yes, yes, that is frosting in her eyebrows)

And for my work with March of Dimes, I was awarded this nifty button from Give it Forward, which is a sweet ass medical fund-raising blog. So thanks, guys! I’m all a-flutter!

53 thoughts on “The Brains Behind The Operation”