Since moving The Guy On My Couch onto my couch, we’ve had a lot of desserts around. We all know I can’t cook. Shit, I’ve burned Jello and tried to microwave a can of SlimFast (not recommended, by the by), and not been even the slightest bit put off by it.

But the Guy On My Couch can cook. He LIKES to cook. He also likes home repairs and would probably clean the pool if the one I had wasn’t four feet across and made entirely of plastic. And no, you cannot have him for yourself. MY Guy On The Couch.

(he doesn’t know that he’s never moving out)

Anyway, he likes making desserts for the crotch parasites, who, in turn, love him more than they love Mario. Which is a lot.

This week, he made them a cake. A white cake with chocolate buttercream frosting THAT DIDN’T COME FROM A CAN. Did you know that you can HAVE frosting without using a can?

It’s not been a great week for Child Behavior around these here parts – I’m sick, you’re sick, we’re all sick, which means I have three extraordinarily crabby children fighting over who gets to the top of the stairs first and who gets to use what cup (despite having three identical cups).

So I haven’t been doling out the cake. I figure, why reward bad behavior? The cake has been largely untouched by the rest of the house, since, well, it looks better on your ass than mine.

(hey, have you been working out? You look HOT in those pants).

I woke up this morning to see this: 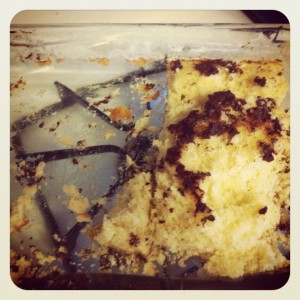 The remains of the cake.

The vultures have been steadily removing frosting from the top of the cake when I was too busy playing Angry Birds or watching dancing cat videos.

You can’t help but laugh.

Wait, what’s that next to the cake? (hint: it’s not Hong Kong Fooey)

Why, it’s one of the Twitter Klout Perks I got! 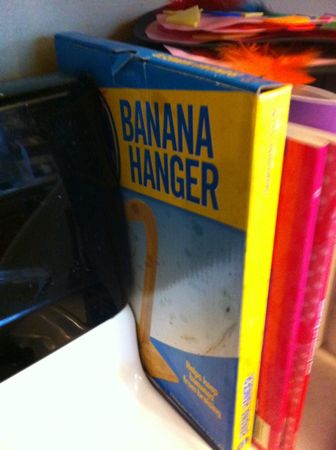 With Klout like THIS how could I ever want anything else?

Seriously, does ANYONE want a Banana Hanger? Because I keep thinking “Banana Hammock” and laughing, which means it’s going to stay in it’s box for the rest of eternity (or until I get low on my “throw/donate one thing away every day” resolution).

23 thoughts on “Thar Be Vultures Afoot”