The first time I saw someone talking on a wireless headset was back in 2003. I was in the bathroom at the Atlanta airport, waiting for my connecting flight, washing my hands. There was a woman standing at the sink, looking in the mirror, having a conversation with herself.

As a student nurse who spent half her time in the hospital dutifully putting in clinical hours, wiping butts and taking names, seeing someone have an actual conversation with someone who was not actually all that uncommon an occurrence. Even now, I dismiss that sort of behavior where other people might lock their doors and run, shrieking, the other direction.

Anyway, I whispered to my friend, “woah, looks like SHE went off her meds,” to my friend Jenna, who was taking this Spring Break vacation with me.

She, always more up-to-date on this sort of thing, just laughed and said, “she’s on the phone, Becks. It’s a hands-free headset.”

Sure enough, when I looked more closely, curious now, I saw the wire dangling down from her ear to the phone. Hm. Odd.

A couple of weeks later, I saw what appeared to be a man talking into his wallet while lunching – once again, with Jenna – at Panera. I eyed him suspiciously, even though he was smartly dressed in a business suit. When I saw he was wearing impeccably natty shoes, I realized that he, too, was probably not recently released from the psych ward.

“What. the. fuck? Why is that man talking on a fucking wallet?” I whispered to Jenna, pointing him out.

She laughed. She was forever explaining these things to me; a Pre-Prankster version of the Internet.

“That’s a Blackberry, Becky. It’s like a PDA with a phone.”

“That is the DUMBEST thing ever. Does he KNOW how dumb he looks? Fucking jackass.” I had a very small phone that I loved very much. I would have married it, but it was stupid (also: illegal) to marry something that had a shelf-life of two years.

I own an i(can’t use my)Phone only because I like Apple products. Had I realized how craptastic the “phone” bit of it was, I’d have gone with a Blackberry. My very own Talking Wallet.

Also: my new anti-depressants are working which means I’ve engaged in one of my favorite past-times: talking paint off walls. On the phone.

Now, because (insert hilarious joke) I have Neck Issues. I also have lots! of! energy! which means that when I am on the phone, I am also washing walls, doing dishes, waxing my cat, cleaning the garage, scheduling posts, watching dancing cat videos, and/or photoshopping pictures of myself into pictures of celebrities.

Okay, that last bit was a lie, because I don’t own photoshop. I can’t do that stuff! Gnomes can, though, and I’m TOTALLY not a gnome.

So, while I’m jabbering away, annoying whomever I’ve conned into chatting with me, I cradle the phone between my shoulder and my ear, like it’s a wee babe. Don’t think it’s helping my neck issues.

It was time to take! action!

I needed an ear thingy for my phone. Except, there are only two options (besides speakerphone, which makes everyone sound like they’re talking from inside a tin can which = bullshit):

1) Ear Penis, a.k.a  bluetooth headsets. I hate them. No, that’s not right: I loathe them. I loathe them so much that I should probably make up a new word for how I feel about them. I know, I know, they’re useful and you can’t live without yours and blah, blah, blah, squirt, squirt. Fantastic. Yay for you! 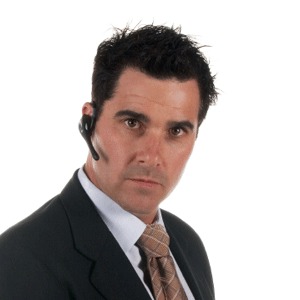 That guy is a Blue DOUCHE.

B) McDonald’s Headset: you know, like the OLD SKOOL phone headset, with the plastic bits that go to your mouth and stuff? I had to wear one when I worked for United. It was pretty awesome, actually, but I think I’ve earned my comeuppance because every time I see The Daver use his, I walk up to him and try to order a “cheeseburger and a diet Coke, please.”

(be glad you don’t live with me)

Today, after agonizing over it for weeks (read: months), I finally broke down and bought an Old Skool headset. My neck deserves it, dammit, and hey, if all else fails, I can totally work at McDonald’s.