When I enrolled in my second college (which was technically more like my 0743067290 college, but for sake of the story, we’ll call it College #2, the college where I graduated from), they, unlike the other colleges I’d attended, had a Philosophy credit. I had Philosophy products and philosophies (i.e. “do not get out of bed before noon WHENEVER possible”), but I’d never intended to take a class in philosophy on purpose.

Let’s face it: I’m not the sort of person who wants to sit around debating what it really means when a tree falls in a forest. I’m too busy plowing through the forest in my mother-humping baby pink Hummer.

Your Aunt Becky is simply not a philosopher. It’s just not in her nature. Books that don’t have colorful pictures or swear words don’t much appeal to me. I tend to tune out when books have long unnecessary words and sentences that exist simply to exist, and the smaller and denser the text, the more I’m likely to use the book as a drool cloth.

But that doesn’t mean that I can’t do it.

Apparently, however, walking into my Philosophy of Religion class dressed not in the requisite black trench coat and stringy black hair made me an instant misfit. Perhaps I should have stopped showering and started shopping at Hot Topic. Because when I walked in, the sneers of the obvious philosophy students were palpable.

I took a seat, grabbed the book out listlessly and took out a notebook where I drew myself with a noose around my neck. That, at least, should have given me SOME sense of goth cred, but no.

The professor was interesting and I always liked to hear him talk, so the class, save for my classMATES, was tolerable.

But the day that we were supposed to get our final papers back, worth something like 65 percent of our grade, he was incredibly nervous. Clacking his fingers and drumming them on the long tables, he jabbered on to the guy next to him about how this would determine his grade for the class.

Our teacher was a notoriously hard grader, it seemed, and he seemed terrified that he would somehow fail and be unable to progress to the following class (this was a really high level philosophy class and how *I* wound up in it is anyone’s guess).

On our other papers, I’d gotten 99%’s so I wasn’t very worried. It just didn’t seem worth the extra anxiety, especially since I was lazy and tired. 50 million red pygmy hedgehogs didn’t give a shit, you know? It was fucking FINALS week and I had a 2 year old. I’d already DONE the best that I could do.

He got his paper back first and must not have done well because he looked miserable. His skinny, slimy pony-tail shook with emotion and his pale skin blotched red. I felt sorry for him, despite that he’d been a real ass to me for months before.

I got mine back and noted my perfect 100% with a “GOOD JOB” scrawled across the top and smiled to myself. I may look like this: 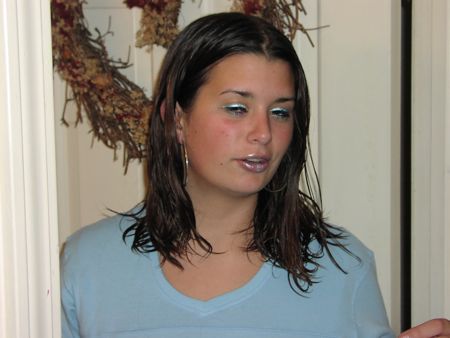 So, Suzie Bright Eyes flips his greasy body around, glares at me and addresses me face first, instead of through snide whispers about “how they let ANYONE into the philosophy program these days.”

“What did YOU get?” he spat at me in a shockingly high voice, clearly hoping to rub a higher grade in my stupid-looking face. I could clearly see his “C” paper from my seat now.

Without waiting for a response, he looked down at my paper and noting the perfect score, his face literally dropped like a thousand toothpicks had been removed at once. A fwwwump!

You could literally see the wheels in his head turn as he simply didn’t know how to react. “How did YOU get this grade?” was the best he could sputter out, the disdain dripping from his every word. If a word could roll it’s eyes, each of his did.

I don’t know what he wanted me to say, but I’d had it with him and the rest of the class. I might look like a fucking idiot, but I’m not. I don’t have to wear all black and read Nietzsche in my spare time to understand philosophy.

So I said, for the first time since I entered the class, exactly what I thought.

If you haven’t signed up to pledge your allegiance to my book, I’d love it if you did. Just go here, drop in your name and email address and I’ll send out a chapter just as soon as The Daver shows me how. Tell your friends, your co-workers and your IMAGINARY co-workers!

Your Aunt Becky needs help and feels like a douche asking (sorry).