In order to be a Sherrick, you have to be willing to deal with traditions. I don’t mean the OCD type where you have to touch the laundry basket 17 times before you can go to sleep or lick the doorknob before you can eat dinner, but in my family there tends to be two types of things: the stuff that you do and The Way Things Are.

The stuff you do is the superfluous crap that goes with living, you know, laundry and work and sleeping and all that stuff, but The Way Things Are, well, this is DOGMA. TRADITION.

And you don’t fuck with TRADITION in my family. The square root of 4 is 2, Helium is the second element on the periodic table of elements and we have basil pesto mashed fucking potatoes on Thanksgiving. ALWAYS.

My brother, my father and my two- year old seem to be the most affected by this DOGMA of The Way Things Are. While I’m happy to try something different, like let’s say The Cheesecake of the Gods rather than my normal Bourbon Pecan Pie, well, that messes with the balance of the universe and well, we can’t have THAT. The universe might IMPLODE because I dared change tradition!

I have my own DOGMA of The Way Things Are, but I’m a little looser with my interpretation of it.

Every year, we sponsor a child from The Giving Tree at Ben’s school. And while my far more rigid BROTHER might have to sponsor the same GENDER or AGE bracket, I’m content to randomly choose one. Last year Dave chose a boy around Benner’s age who wanted socks. SOCKS. I know. I KNOW.

This year I chose a girl whose age was unspecified. I chose her and my eyes filled with tears, much like they always do every single year when I choose a kid from the tree.

I cried there, though, as I picked up the tag with the gift choice on it because it was what I was going to get my daughter. No age, no identifying characteristics, just a parallel into my own life:

Amelia loves the baby dolls that we have, but those aren’t her dolls, they belong to Alex and Ben who begrudgingly share them. So I’d been planning to get her a doll for Christmas. In fact, I’d already been up and down the aisles at my boyfriend, Target searching for the perfect doll, so proud that I could finally go down the Pink Aisles at last.

Friday, Black Friday, we have another DOGMA TRADITION where we go out that evening to Target, my home away from home, to score some cheap DVD’s and see what they still have on sale. While we were there, I noticed that they had this baby doll and accessories pack on sale for half off which I promptly snatched up from the vultures in the toy aisle for my Giving Tree Girl.

This thing was AWESOME. I was admiring it as we walked along because it was precisely the sort of thing my hippie mother never would have bought me, eschewing it in favor of some wooden, anatomically correct doll I would have lobbed out the window. It had everything, though, crib, car seat, high chair and stroller along with assorted bottles and outfits.

I tend to go a little overboard for my Giving Tree Kids because it makes me feel good and why not?

We got it home and I left it on the floor downstairs so that I remembered to wrap it and send it back to school with Ben because I am FULL of The Forgetful. In the whirlwind of unpacking after Thanksgiving Part II, I didn’t really notice it until she was on top of it, but my daughter had made a beeline for the box with the baby inside.

She had pulled herself up on it and was trying her damnedest to get the baby out. Every side she explored, looking for a way in and OH was she pissed when she realized that she couldn’t get at it. I really hope that my Giving Tree Girl loves it as much as my daughter did.

Everyone had teased me that my daughter was going to eschew anything girly to be a tomboy like her brothers, just because I wanted her to be girly, and maybe that’s going to happen.

Then again, maybe not. 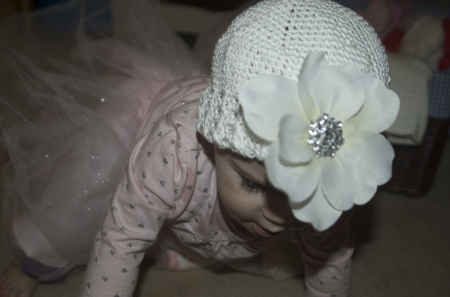 Let’s talk about how much I need that hat in my size, Internet, because I SO do. 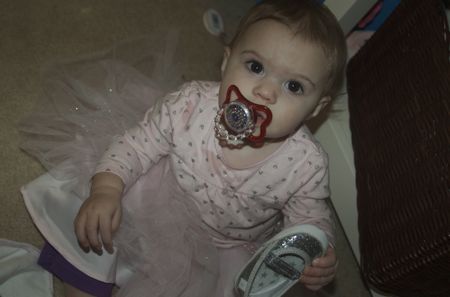 Those shoes are for Binky Spohr, but Amelia dug them out and loves them. They’re much too small for her, but you know, a girl loves what a girl loves.