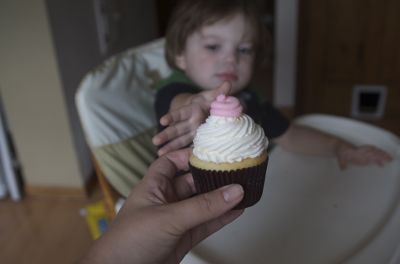 Why NO, I didn’t make that cuppy-cake. Of course I did not. Because if I had, it would not have been a) symmetrical or 2) frosting-ed. I am many, many things, none of which springs to mind is “aesthetically oriented.”

But that picture is important, not because it clearly shows my bully-ness as I am taunting my son with a cuppy-cake, because not two seconds after this shot, I gave him the delicious slice ‘o’ heaven, but because it fully solidifies that he is my son.

Historically, Alex has eschewed anything cake-related in favor of gnawing on, well, anything else, including, but not limited to edamame and well, lately, air. But now, NOW he sees that cake is next to godliness and occasionally allows me to ply him with sugary, springy goodness.

I was going to come here and whine to you about my My Grains. Give you a list of my symptoms and complain bitterly about what a pain in the pooper it is to find a cure for something that could be caused by, well, anything.

It would have been a rousing, self-serving, irritating post, full of long-winded descriptions of each of my symptoms, along with their possible causes, the likes of which, along with discussions of my recent colonoscopies are better suited for Thanksgiving Dinner Table Discussions (don’t all clamor to thank me at once, those of you who will, no doubt, be stuck with me at Thanksgiving).

I decided against it.

It served no purpose, this post I’d half written, other than to prune down my readership and annoy me later when I realized what a sniveling baby I was being. I have nasty migraines and they suck and 50 million red fire ants don’t give a shit.

So today, armed with my Topamax and Vicodin (which, squee!), I am going on a mission. No, thankfully not Mission: Manband.

I am dragging The Daver out to make a care package for my friend Heather, who is pregnant and sick as fuck. You, of course, know Heather and Maddie and Mike and Binky. If you do not, I’ll give you a moment to go and catch up and come back.

HEATHER, GO AWAY NOW AND EAT SOME MASHED POTATOES OR DORITOS OR SOMETHING.

I MEAN IT, HEATHER.

47 thoughts on “Stealing Candy From Babies”